A Taste of Further Future 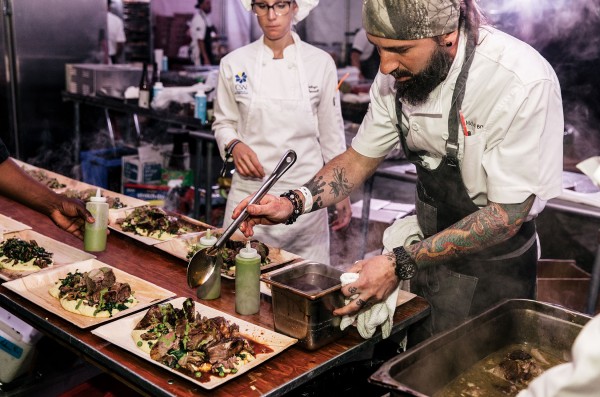 
Musically, I probably had no business attending Further Future (FurtherFuture.com). With all due respect, nothing could be further from my personal taste than the works of Nicolas Jaar, Caribou or Lee Burridge (the three most anticipated of more than 70 acts, according to the festival’s remarkably useful app). But what was to my taste was the culinary lineup: District One, SLO-Boy, Poutine Your Mouth and more in the Vendor Village, as well as several high-end pop-up dinners in the desert. (The festival’s steampunk mélange of Mad Max, Bladerunner and Wild Wild West also appeals, aesthetically.) So on April 29, I made the 45-minute drive north on Interstate 15 to the festival grounds on the Moapa River Reservation. I brought a pillow, a sleeping bag, a wardrobe of futuristic attire and as open a mind as I could muster.

According to festival reps, 4,500 people flowed through between April 29 and the morning of May 2. As early as noon on Day One, they streamed through the gates, kicking up swirls of pink dust as they parked cars and hooked up RVs, pitched tents or strolled entourage in tow into any of the fancier camping options ranging from reflective Fest Pods and military-esque bell tents (with air conditioning!) to the 28-foot Airstream trailers and fully-appointed domes for four, concierge service included. At $45 for the weekend, the cheapest real estate around was a six-inch-tall, one-foot-wide locker with charging capabilities. That effectively became my home base, accommodating a backup water bottle, Chapstick, sunscreen, tissues, deodorant and all the charging power a gal could ever need or want. 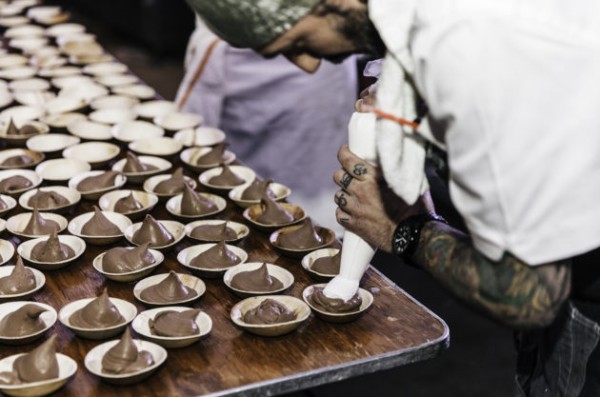 It takes a village to feed 4,500 millennials, so a village they built. The crescent-shaped Vendor Village quickly became the central hub of activity, sitting opposite the Void stage, a low-key spot that always had someone on the decks. Filling the gaps between the two were woven-reed chaises for dining, lounging and catnaps. Strung festival lights made this the obvious meeting place come night, when the rest of the grounds were plunged into darkness. Slinging food here nearly around the clock were 25 vendors, including Downtown’s SLO-Boy, Makers & Finders, Grassroots and Le Pho, plus District One, the Intuitive Forager Farm Shop and Gelatology, with options ranging from $6 to $15. The Future being cashless, transactions required RFID bands or credit cards. I chowed on chilled pork and shrimp spring rolls with peanut sauce from Le Pho; a tasty three-taco plate from QFS Tacos; and restorative Vietnamese coffee and piping-hot veggie pho from District One—all fresh and delicious.

Humans tend to get thirsty in the desert, so water was abundant, available for $4 in Tetra Pak cartons or free from canteen filling stations. While alcohol was not the focus of the festival for many of the attendees, it was still a welcome amenity. Downtown’s impending King Hippo bar’s pop-up did brisk business, as did the Velveteen Rabbit pop-up, where proprietresses Pam and Christina Dylag made cocktails with spirits that had mingled with crystals, served with spell cards to attract love, protection, wealth or the special intention of your choosing. Predictably, Love was both tasty and popular. The Moët-Hennessy team had the VIP scene on lock with Moët & Chandon Ice Imperial at the main stage, spa and VIP tent bar near the Airstreams. And if you’ve ever been curious about trance artist Richie Hawtin’s Enter.Sake, his shipping container sake bar by the Robot Heart stage was doling out healthy pours. 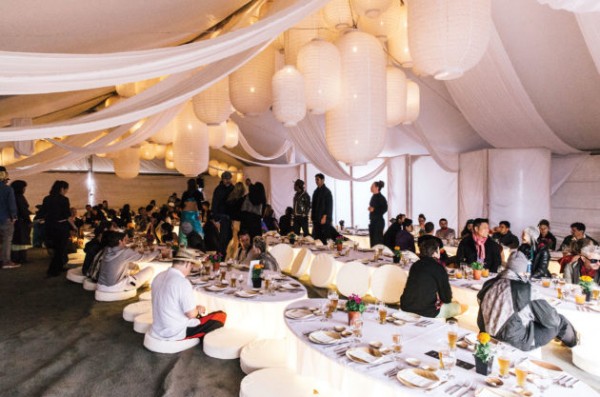 But that was not the only place to try Enter.Sake. In the Pop-Up Dining tent, Jolene Mannina kept up a steady flow of fancy, sold-out pop-up dinners all weekend. (She also oversaw nearly all the food and beverage for the festival this year and last, including most of Vendor Village, plus all artist riders and private dining, and hired the team from Herbs & Rye to run point on beverage.) Friday night’s Echo & Rig dinner welcomed 200 guests to sit on floor cushions and dine like royalty, while the Nobu dinner allowed just 150 impeccably dressed guests to spread out a little as they enjoyed their miso black cod, Japanese wagyu short rib and assorted sushi paired with a Herradura Tequila welcome cocktail and four varieties of Enter.Sake. On Saturday, the tent saw a California takeover by L.A.’s the Larchmont (with excellent beers from Boomtown Brewery) and Venice Beach’s Rose Café (with wine from Third Leaf Partners labels). On Sunday, DW Bistro and Forte European Tapas served brunch to yet another 200 guests. In all, Mannina estimates more than 1,100 such fancy meals were served in the desert.

The biggest issue facing Further Future 002 was the one thing that cannot be controlled (although it could be better prepared for). Weather ranged from sunny and warm to blustery and overcast all the way to torrential downpour, gale-force winds and even hail. “In addition to weather, one of the biggest challenges for me—even after the first year—is determining the flow of a 24-hour festival and being the only person on the team who lives in Las Vegas,” Mannina says. “I am getting familiar with taking meetings on Bali and Hong Kong time.” The Future, it seems, is also a remote-working society.

“I didn’t bring a PowerPoint, I brought a drink. Is that cool?” –Hospitality design/operations consultant Tobin Ellis, Booba Cosmica stage, 7:31 p.m. May 1.

The post A Taste of Further Future appeared first on Vegas Seven. All photos by Krystal Ramirez