"The Flowing Bowl: When and what to Drink : Full Instructions how to Prepare, Mix, and Serve ... William Schmidt. C.L. Webster, 1891 HAND SIGNED By William Schmidt

A German immigrant who sailed over a couple years after the Civil War, he worked in Chicago for a time and then came to New York. There, in a ramshackle bar next to the Brooklyn Bridge, a reporter from The New York Sun discovered him. For the next 16 years, he was the most famous bartender in America. Any man lucky enough to try one of his elaborate, carefully thought-out concoctions walked away convinced. Schmidt may have been a bit odd, but he was the first bartender to gain renown for inventing his own drinks: the first “bar chef.” 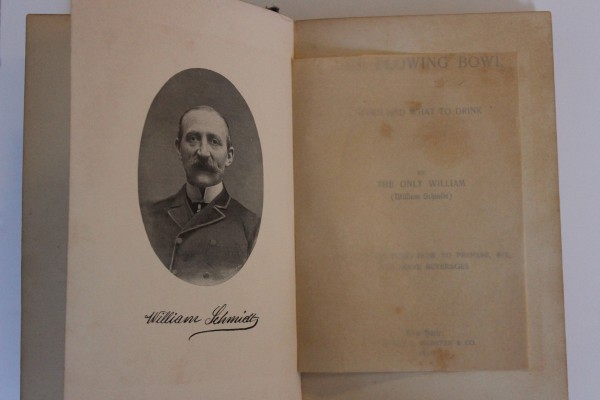 "Mixing drinks might be compared to music, an orchestra will produce good music; provided all players are artists, but have only one or two inferior musicians in your band; and you may be convinced they will spoil the entire harmony.
- William Schmidt 1891