For the last year or so, my bartender presentations on absinthe have included much more about the role of absinthe in cocktails. Absinthe was first distilled commercially in 1798 (in Couvet, Switzerland) and 1798 is also the year that the word "cocktail" first appeared in print meaning a drink. Absinthe and cocktails seem to have been "paired at birth."

Around the world, bartenders now seem to realize that a lot of the old stories and ways of drinking absinthe were myths and fabrications to prey on the ignorant. But some bartenders still don't seem to know what to do with absinthe (apart from rinses in Sazeracs and dashes in Corpse Revivers, that is).

So I was delighted when James Fowler contacted me about an opportunity to talk about absinthe in cocktails with the Bournemouth Bartenders League (BBL). James will be well-known to regular readers here as the owner of The Larder House (home of the first UK absinthe dinner) and more recently the UK winner of Diageo's World Class Bartender competition. I don't know whether there is "something in the water" around Bournemouth or whether it is the inspiration of people like James, but it is clear that there is a lot of bartending expertise there. James put me in touch with Salvatore Damiano of the BBL and a few weeks later, I drove to The Larder House and I gave a short presentation about absinthe in cocktails (with the behind-the-bar help of Franco) ...

I have no idea what I was doing with the iPad in that top right shot, but by the time of the bottom right shot, I had finished my talk and was enjoying watching the cream of local bartenders at work. Why? Well, I have spent far too much time in the last year or so analysing history, the ways in which absinthe was used in cocktails back in the days of Harry Craddock at The Savoy (1930), and how modern bartenders are now using absinthe. For example ...

The first column of numbers shows the % of absinthe cocktails which used specific other ingredients in The Savoy in 1930. Not surprisingly absinthe was used in a lot of cocktails with gin and/or vermouth. The second column of numbers is based on the best absinthe cocktails book, A Taste for Absinthe, published in 2010, with cocktails provided by many of the world's best bartenders. Gin and vermouth have slipped down the list, and lemon/lime along with sugar or simple syrup have become the most popular ingredients to be paired with absinthe in cocktails.

Interestingly both La Clandestine and Pernod are working extensively with cocktails made almost entirely with absinthe, limes and sugar. The Clandestino was first made in 2007 and The Green Beast was first made about three years later.

So why was I at the Larder House? Here there was a team of contestants who were not thinking of the 1930 or even of 2010. They were thinking of creating the next great absinthe cocktail. Their brief was to use a full measure of absinthe, either La Clandestine or Butterfly, in creating their own new cocktail, and here is what they created and what I had the pleasure of judging ..

Shaken and pour in a tumbler

I loved the way that David took elements from Butterfly's past: especially the fact that the owner of Dempsey, Boston, was one of the major US players fighting the threat of prohibition.

Shaken and pour over crushed ice in a jam jar 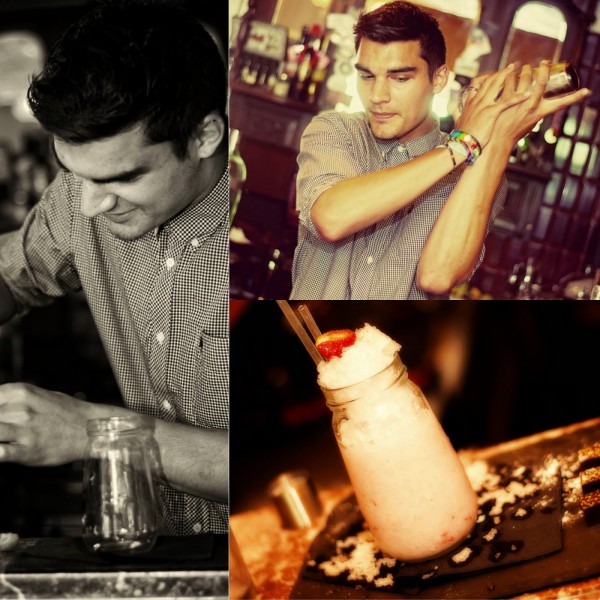 Beautifully made with some great ingredients; excellently presented.

3. Harry King, The Library at The Larder House

The foam was an interesting challenge for a judge; of course one has to taste through it too, in order to understand how the taste of the cocktail will develop. The one small issue I had with this cocktail was the name which didn't quite communicate how wonderful this cocktail was.

Shaken and poured into a tea cup

A very full measure of Butterfly here: 40 ml. Great taste and presentation. This is getting difficult ...

Covert Beets in the Back Streets of Couvet 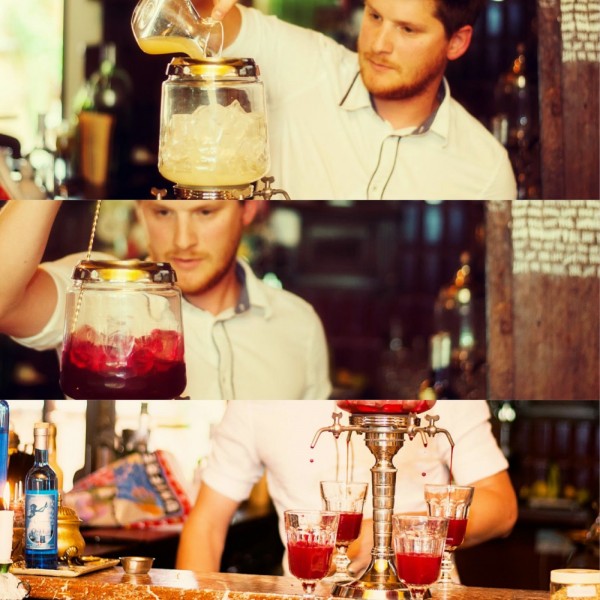 I had met Joel previously and, honestly, I didn't want him to win if he seemed to have any inside advantage! But I couldn't fault the concept or the final presentation and taste. Absinthe and beetroot do work together well, both visually and in a cocktail. It wasn't the punchiest of names for a cocktail but apart from that, it was faultless. 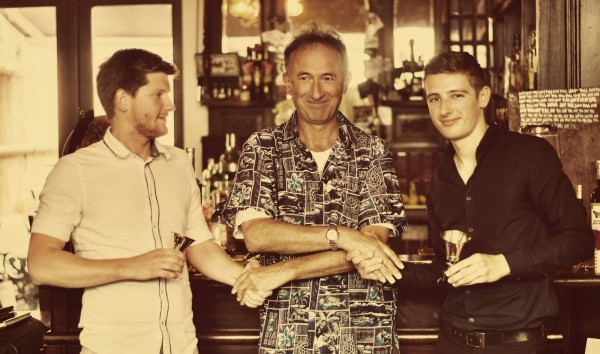 And I was delighted that Salvatore chose another winner, David, for the Bournemouth Bartenders League prize.

It was a great day for me, in which I learnt a lot about the process of creating cocktails: from naming, through to preparation and execution. Thank you to the Bournemouth Bartenders League, thank you to Matt Pollard for the photographs (hopefully my collages did not spoil them too much!),and above all thanks to Salvatore for organising it all. It is clear that great absinthe cocktails can be made with much more than a few drops or dashes as used by Craddock in 1930. If this happens elsewhere, absinthe distillers will be very busy keeping up with demand in the near future!