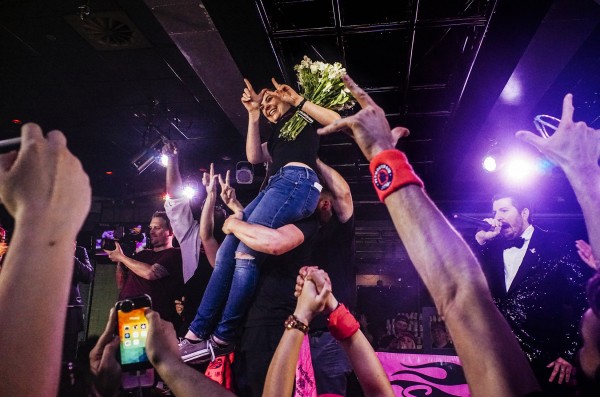 All beverage-industry eyes were on Las Vegas this month as crowds flocked to events surrounding the Olympics of the beverage industry, the Nightclub & Bar Show. The mixology marathon kicked off March 1 with A Feast of Friends, a guest-chef dinner at Artisanal Foods Café, hosted by One7 Communications social media manager/publicist Eric Gladstone, Bin 702 owner Sonny Ahuja, Downtown 3rd Farmers Market publicist Rocksan Clark and the café’s chef Johnny Church, and welcoming a team repping Glenfiddich Whisky. The six-course whisky-paired dinner set the scene for the Universal Whisky Experience, which culminated in a grand tasting at The Nth on March 4. That weekend, the local bar community gathered in support of a double header on March 6 that began with Speed Rack Las Vegas (where Herbs & Rye’s Emily Yett, pictured below, was victorious) and rolled right into Bar Mania at Herbs & Rye, both fundraisers for cancer-related charities.

By the time the Nightclub & Bar Show itself poured into town March 7-9, Las Vegas’ pump was primed for parties that took over Hakkasan, Hyde, Daylight, Marquee, XS and even a Far East-themed Cocktail Clubhouse by Breakthru Beverage at Downtown’s Hartland Mansion. Whereas the show used to revolve almost entirely around the expo floor—pulsating with gobo lights, shot-glass harnesses and other blinking, smoking nightclub trickery—the trade show has gotten serious about things that matter to all sorts of business owners. The schedule this year packed a full complement of seminars, some hosted by local luminaries such as BarMagic of Las Vegas’ Tobin Ellis, FlashPour creator Nick Houck, Echo & Rig chef Sam Marvin and Southern Wine & Spirits’ J.R. Starkus and Herbs & Rye owner Nectaly Mendoza, who received the coveted Bartender of the Year award.

Two more cocktail competitions rounded out the week: the Underground Bar Brawl Club, which took over the Red Light Bar behind F. Pigalle Downtown after hours on March 9, and the battle of the Bar Stars, which commandeered the bar at DW Bistro during dinner on March 10, with cocktails inspired by the life and times of the late David Bowie.

Since the Nightclub & Bar Show concluded, it’s been business as usual while local bars return to launching their spring menus, now blooming all over town. This is a much-needed respite while we gear up for the next epicurean event onslaught, which will bring us the Great Las Vegas Festival of Beer (April 9, GreatVegasBeer.com), UNLVino (April 14-16, UNLVino.com), Vegas Uncork’d by Bon Appétit ( April 28-May 1, VegasUncorked.com) and the Further Future festival (April 29-May 1, FurtherFuture.com).