This Is The Margarita of The Year

Contributed by Drinking In America on May 02, 2017

That was supposed to be a drum roll. I hope you got drumroll from the title.

That dramatic introduction was crafted with care in order to announce the Margarita of the Year.

It’s kind of a big deal.

Not to get all scientific on you, but Patron isn’t messing around. They chose seven top bartenders from around the world to create the perfect margarita. THEN. Their recipes were recreated in bars, restaurants, and Patron events for people to try. THEN. People were asked to cast their votes for the top 3. THEN. They cast their votes again to pick the best of the best.

So this wasn’t just some brand ploy. This margarita mights actually be the best in the world.

It was inspired by an ocean sunset.

And it’s made with Patrón Reposado, Patrón Citrónge Orange, red wine, hibiscus, and a sugar-salt rim.So now you can enjoy the best margarita IN THE WORLD this Cinco de Mayo. You’re welcome. 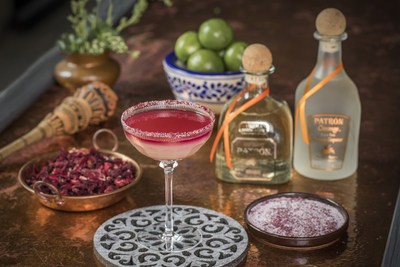 Combine Patrón Reposado tequila, Patrón Citrónge Orange liqueur, simple syrup and lime juice in a shaker. Next, add ice and shake vigorously. Then strain into a chilled glass rimmed with the sugar-salt rim. Last but not least, (carefully) float the red wine onto the top of your marg.

*How to make the sugar-salt rim: Pulverize 0.25 cup dried hibiscus in a spice grinder. Add 0.25 cup sugar and 0.25 cup kosher salt, and pulse until combined.

The post Baaaadaaabaddaaabaddaaa appeared first on DRINKING IN AMERICA.