Contributed by Drinking In America on Apr 28, 2017

DrinkWire is Liquor.com’s showcase for the best articles, recipe and reviews from the web’s top writers and bloggers. In this post, Drinking In America explains the new way some companies are crafting spirits. 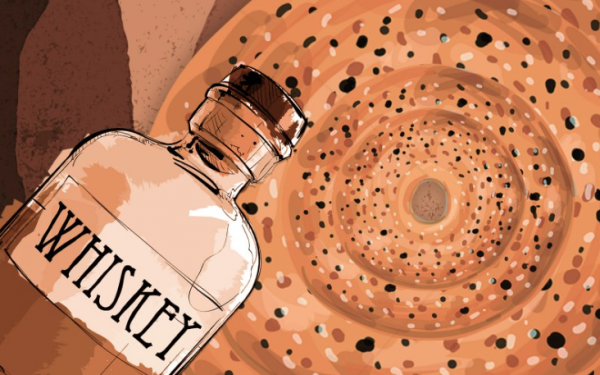 Bagels are usually thought of as the hangover breakfast. There’s nothing like a bacon egg and cheese on a toasted bagel to sop up last night’s shots. But what if the roles were reversed? Getting drunk off bagels? We’re hesitant, but as the booze-expolerers we are, we’ll entertain the idea…

To clarify, the idea isn’t to eat a soggy booze-soaked bagel. Rather, it’s drinking whiskey that was made from left over bagels. Amy Bohner, from Alchemy Distillery in Northern California’s Humboldt County, is the brains behind this operation. She was inspired by the British brewery Toast Ale, which uses leftover bread to make beer. She gets the stale bagels from Los Bagels, which had previously gone to feed pigs. (Don’t worry, the little pigs are still getting some bagels too!)

Bohner collects 60 pounds of bagels weekly (including plain, multigrain, sesame and poppy-seed) and freezes them until there are enough for a full batch. Then they’re ground up using a wood chipper, fermented and distilled (like corn, barley, or rye). The first batch is aging in a charred new American oak barrel as we speak (type?). The first bottles of Boldt Los Bagels whiskey should be ready by Hanukkah.

As unique as this project might seem, it isn’t alone in the whiskey world. There is a new generation of distillers that are experimenting with a range of ingredients and techniques to create wide variety of whiskies that don’t fit into traditional categories.

Back over here on the east coast, New England’s Berkshire Mountain Distillers is making new waves too. They’re taking their unfinished bourbon and aging it for a second time in a barrel that previously held smoky and peaty Islay single malt Scotch. The finished product is a almost a hybrid of bourbon and Scotch.

Another interesting category-bending American whiskey to come out recently not only is influenced by old-world distilling traditions but was dreamed up by the Irish-based Connacht Whiskey Co. Named Brothership, it’s a blend of 10 year old American whiskey and 10 year old pot still Irish whiskey.

These new trends have given no sign of slowing down, so make sure to get on board now.

The post Bagel Whiskey? appeared first on DRINKING IN AMERICA.