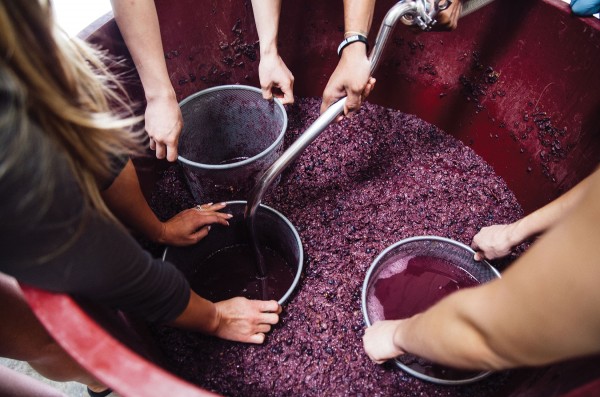 With increasing pressure on bartenders to expand their liquor knowledge (often propelled by competing brands or proprietors vying for relevance), wine and beer savvy can sometimes take a back seat to spirit category training. But ongoing classes such as the Cicerone Certification Program offered by Southern Wine & Spirits and Breakthru Beverage, and the Wine & Spirits Education Trust (WSET) seminars at Hakkasan are helping to fill out the picture.

Noticing the trend, 30 members of the Las Vegas chapter of the United States Bartenders’ Guild agreed to go in on a barrel of wine together in July. The only catch: They’d have to make it themselves. Enter Grape Expectations: The Nevada School of Winemaking.

More than just a hobbyist’s pursuit, the nearly 10-year-old outfit welcomes anywhere from a couple people to entire organizations to participate in all five steps of the nine-month winemaking process at the cavernous GrapeX facility in Henderson’s so-called Booze District. The school was founded by late winemaker Charlie Peters in 2005, and is now in the hands of Mike Schoenbaechler, who began as a customer and volunteer, and is now the general manager and chief winemaker.

The first meeting on August 11 is all business. Well, mostly. With Fleetwood Mac playing softly in the background (music is big at GrapeX), “Professor of Yeastology” K.J. Howe leads the group through a process to decide what wine they’ll make. “It’s 10 percent science and 90 percent art,” he says, reading glasses bobbing on the end of his nose. His crown of wild hair is as white as his long lab coat. 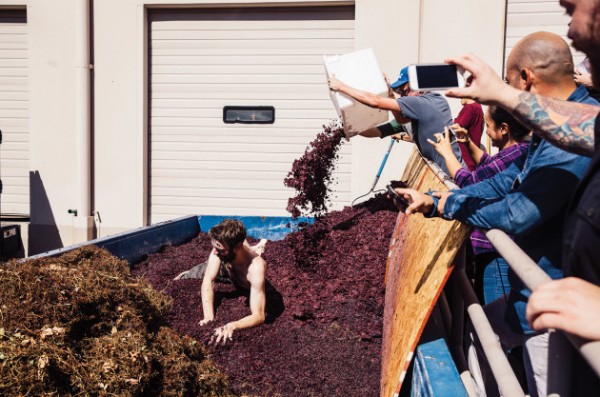 Other than Howe, the only other proficient in the room is Cody Fredrickson, the chapter’s secretary and a repeat GrapeX winemaker via his favorite pug-rescue charity. The wine will be red—don’t ask why GrapeX doesn’t make whites or Howe will fume in mock anger—but other than that, he says, “This is now your winery.”

So what’ll it be? It comes down to a Rhône-style GSM blend (grenache, syrah, mourvedre), a Super Tuscan-style blend (sangiovese with a little cab, merlot and syrah), or a blend in the style of the popular Prisoner wine (zinfandel with a little cab, syrah, petite sirah and charbono). The consensus is to go with the GSM blend (60:20:20) and to add spirals of medium-toast French oak for some extra oomph.

At the September 30 Crushing & De-stemming session, the group is greeted by 21 cartons of fresh, handpicked grapes—756 pounds of ripe, juicy potential from Napa, Sonoma and Lodi that will yield one 53-gallon barrel of finished wine. (That’s 240 bottles for the group, give or take, and at $3,200 total comes out to $13.33 per bottle—not a bad deal!) The bartenders, including Taco & Beer’s Katie Cruz, Mandarin Oriental’s Heemo Yang and Wynn’s Jake Davenport, heave the grapes into the machine that crushes them and removes the stems. They go into a plastic tub with yeast and a nutrient complex, where the fermentation action begins almost immediately.

When we return seven days later, the Crush group uses slotted baskets to collect the fermented juice, then hand-buckets the rest of the must into the basket press, which is turned until every last drop dribbles out.

“It’s one thing to read about winemaking, but another to see the [grapes] pressed,” says Keith Baker, a bartender at Mickie Finnz and co-founder of the Underground Bar Brawl Club. “As a bartender, I know that all spirits start as either beer or wine, and then are distilled into their higher-proof selves. Participating in this first part of the process enables me to give guests a more thoughtful explanation of the steps.”

“Only one percent of people who consume wine ever make wine,” Howe says. “You’re the one-percenters!” Into the second-use America oak barrel goes the juice and everyone bids farewell; after February’s Racking Day, when they remove the sediment and return the clarified juice to the barrel, they won’t touch the wine again till May or June’s Bottling session.

Maybe by then this wine will have a name. But for now it’s just USBGLVGSM. You’d order that at a bar, right?