Release day for the Buffalo Trace Antique Collection — a once-a-year lineup of five highly coveted bourbons and ryes under the venerable distillery's umbrella — is hotly anticipated, both by whiskey collectors who want to hold on to their bottles and make a buck somewhere down the road and folks who want to, you know, drink them. Hoarder though I am, I can't resist tasting the Fab Five every year. There's plenty for booze geeks to obsess over. How does the proof of the George T. Stagg bourbon compare to last year's, or the year before? In which warehouses was this year's Thomas H. Handy rye aged? The Eagle Rare is 17 years and how many months again? But for those who are indifferent to such minutiae, the fun is in the glass, because — with very rare exceptions — the BTAC lineup contains some damn good whiskey.

Each bottle is retailing for $99, but expect some price-gouging from your friendly neighborhood liquor retailer, for whom demand will undoubtedly outstrip supply. Are they worth it? Well, you're just going to have to read on and find out, won't you.

SAZERAC RYE 18 YEAR OLD (45% ABV). If the Antique Collection can be said to have a weak link, it's the Sazerac, which to my taste buds is more hit-or-miss from year to year than the other BTAC whiskeys. But this year's model is a hit. A beautiful vanilla-and-butterscotch nose leads to more of the same on the palate, with some cherry sweetness, baking spices, and just a hint of menthol. The finish is long and dry and pretty tannic, which is no surprise given its age, but it sits comfortably on the right side of the woody/too woody divide. You can get better ryes for less money, but you won't regret having this one on the shelf or in your glass.

THOMAS H. HANDY SAZERAC RYE (aged 6 years, 62.85% ABV). It's a rare 125-plus proof whiskey that doesn't need water, but this beauty doesn't need a thing except a nice glass and time to savor it. Yes, you feel the heat, but it's a warmth rather than a burn. The alcohol is kept in check by about seventeen metric tons of flavor — dark chocolate, burnt caramel, candied orange peel, and a healthy amount of cocoa and oak on the back end. The finish is warm and ever-so-slightly sour and goes on... and on... and on, almost to the point of incredulity. A few drops of water made it a little creamier and brought up more milk chocolate notes, but I prefer the Handy in its unadulterated form. A truly great rye that's (probably) worth whatever the secondary market is going to be charging for it

EAGLE RARE 17 YEAR OLD BOURBON (50.5% ABV). I never had a problem with this fine elder statesman at 90 proof, but it's still a good thing that it's was upped to 101 last year — where, according to Buffalo Trace, it will stay indefinitely. The extra alcohol helps keep the oakiness in check, which is beneficial because this is one oaky bourbon. Of course, once you peel back the bark of this sucker there's a lot more going on, namely vanilla, toffee, a hint of bitter dark chocolate and sweet candied fruit. The finish is tobacco, leather and oak all the way. Not a starter bourbon, to be sure, but a terrific one for those who know their stuff and appreciate a little seniority in their glass.

GEORGE T. STAGG BOURBON (aged 15 years, 58.45% ABV). Stagg has generally been the most anticipated and most lauded of the Antique Collection, and its reputation is deserved.— traditionally coming in at close to 130 proof, it's a giant among bourbons, brawny and boozy but flavorful and beautifully balanced. This year's model is the "weakest" Stagg yet, coming in at a "mere" 116.9 proof, thanks to the barrels aging on lower warehouse floors than usual. The cooler temperatures on the lower floors cause the alcohol to evaporate faster than water. But no worries, this is still a high-octane and highly flavorful bourbon. Vanilla, roasted pecans, baking spices and a hint of dark fruit leads to a toasty, slightly sweet and spicy finish. More refined folk may want to add a splash of water for a smoother ride, but what's the fun in that? 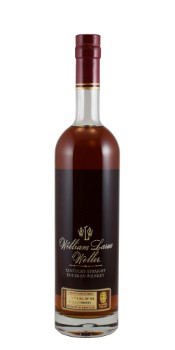 WILLIAM LARUE WELLER BOURBON (aged 12 years, 64% ABV). Rivaling the Stagg in terms of popularity and fanaticism, this year's Weller is the highest-proof of the BTAC... and it tastes like it. Taken neat, it's delicious, but it's like a bucking bronco — my tongue is holding on for dear life amidst the alcoholic heat. I don't like adding water in general, but in this case there's no shame in a splash or an ice cube. The water brings out a lot of tropical notes that were buried underneath the heat, like papaya, apricot, and even a hint of coconut. The finish, with water, is soft and chocolatey and oh-so smooth. My favorite of the 2019 bunch. And remember, "barrel proof" really means "You get to add as much or as little water as you like." It definitely applies here.