Catching Up With Copper & Kings, Kentucky's Most Iconoclastic Distillery

Copper & Kings is like no other distillery in Kentucky. And it's not just because they don't make bourbon. It's probably the only distillery, in the state or out, that has a barrel aging with a big question mark on the head. "We distilled all the leftovers at the distillery," explains founder Joe Heron. "So whatever's left over from an event, from a tasting... we call it 'Let The Mystery Be.'"

Let The Mystery Be hasn't been released yet, but a torrent of brandies, absinthes, gins and more, many of them in partnership with distilleries both local and far-flung, have hit liquor store shelves and the taste buds of a growing number of fans since the brand's inception in 2014. As master distiller Brandon O'Daniel says, "There always has to be something new cooking. [Joe Heron] wants us to experiment with barrels, new varieties, new styles. It's been a crazy experience being able to play around as much and be as creative as we have been. If you're not moving and doing something different here, you're in trouble, basically."

Based on Copper & Kings' output from 2019 alone (and having gotten a preview of some of their upcoming boozy developments), O'Daniel won't be getting into trouble anytime soon. I've been lax in reporting on C & K's new releases, for the simple reason that by the time I'm ready to write one up, it's already been supplanted by the next latest bottle. So this is my attempt to get caught up with the Copper & Kings Class of '19 before we ring in 2020. It's by no means complete, but the five included here are the ones I think most warrant a spot in your liquor cabinet. Some of them are limited editions, but they should all still be findable and affordable. Apple brandy and chocolate liqueur, alas, aren't as collectible as bourbon or single malts. At least not yet. 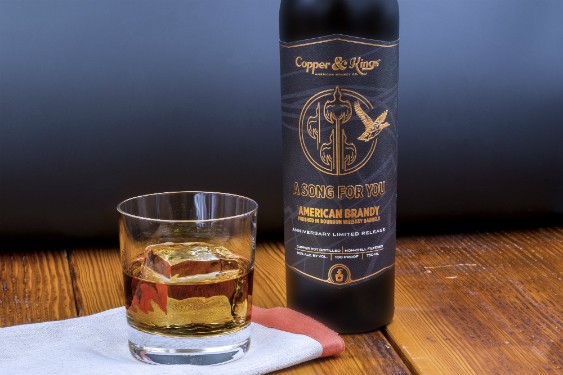 A Song For You 5th Anniversary American Brandy (50% ABV. $50). Released to commemorate a half decade of Copper & Kings, A Song For You (named after the Leon Russell tune covered by everyone from James Taylor to Ray Charles) looms large in the brand's legend — it contains the first brandy they ever sourced, nicknamed "DNA1." Now aged 8-18 years and bottled at a hefty 100 proof, it's mostly a blend of Muscat, Chenin Blanc and French Columbard grapes with a few other varietals thrown in for good measure, sourced from seven different states. This is a delicious argument for American brandy, rich and spicy with notes of bitter chocolate, underpinned by dark fruit notes. It's nothing like cognac, not really like any American brandy I've had, and by golly, it doesn't need to be.

Destillaré Intense Chocolat Liqueur (45% ABV, $35). It's hard to mess up a chocolate liqueur, but I'd also argue that it's hard to make one that really stands out from the crowd. This one does so, with a brandy base that's unusually high-proof for a liqueur; honey instead of sugar to sweeten it; and it's brought to proof with water infused with Caribbean cocoa nibs. It's a risky formula that could ride off the rails, but this is stellar stuff. No cream here, and no syrupy sweetness either. You can taste the brandy, you can taste the honey, but most importantly, you can taste the rich chocolate, especially on the lingering finish. It's great for a change of pace in a Brandy Alexander, but I like it on the rocks or even neat. (There's also a Destillaré coffee liqueur, made in the same style, and it's also delish.) 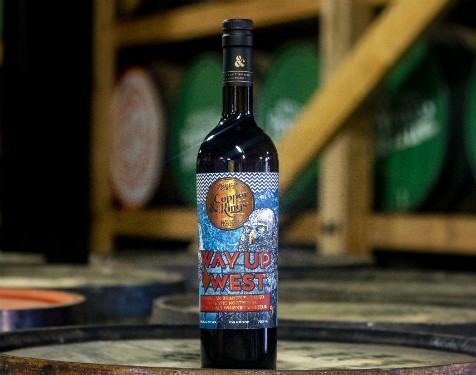 Way Up West American Brandy (54% ABV, $65). This is a collaboration with one of the Pacific Northwest's finest American malt whiskey distilleries, which was acquired by a large conglomerate well into the process — and that's why the name of said brand is nowhere on the bottle. But you can probably figure out which brand it is for yourself. And you can definitely figure out, with the aid of a bottle and a glass, that this is a tremendous brandy. Featuring C & K's "Alliance Blend" of Muscat, Chenin Blanc and French Columbard grapes, it was aged for 2 1/2 years in ex-bourbon barrels and another 2 1/2 in aforementioned single malt barrels. It's soft, rich and sweet, with notes of caramel and a hint of spice, but what does it for me are the notes of smoke, brine and salt — like hanging out by the embers of a campfire on the beach at sunrise. Yes, it's a brandy for peated whisky fans, but also a great brandy for... brandy fans.

American Apple Brandy (46% ABV, $35). American apple brandy (as opposed to Calvados) has become a thing again in the last couple of years. The brand most people know is Laird's, which has only been making the stuff since the 18th century. But Floodwall, a 100-proof monster aged in ex-bourbon barrels and ex-sherry casks, put Copper & Kings on the apple brandy map, too. Their new American Apple Brandy, comes in at a slightly lower proof, aged up to four years in ex-bourbon and new American oak barrels. Underneath those apple notes it treads quite close to whiskey territory, with dry, slightly spicy barrel notes coming from the wood. Neat, on the rocks, or in an Old Fashioned, this baby really shines. If I had to choose only one C & K apple brandy, I might pick Floodwall by a hair. Fortunately, you don't have to choose — they're both pretty terrific.

The Ninth: A Symphony In Orange Gin (45% ABV, $35). I should start by saying that I like my gin to taste like... well, like gin. Meaning London Dry style — crisp, bracing, and most importantly, juniper-forward. A gin that doesn't taste primarily like juniper is, if you ask me, a flavored vodka. So I was deeply suspicious of this little number, utilizing an apple brandy base with a ton of citrus in the botanical mix, and then finished in C & K's own Destillaré orange curaçao barrels. The result is heavy on the orange, sure, but it's much more subtle on the tongue than it looks on paper. And sure enough, the juniper remains up front, and the "classic" gin botanicals like cardamom and coriander are present and accounted for as well. Makes a fine gin and tonic and an excellent martini, although you can skip the orange bitters.