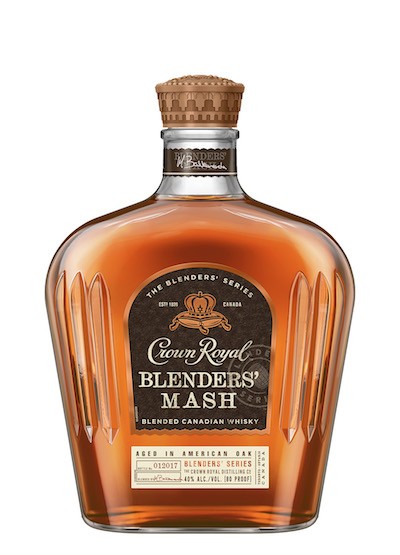 It’s bright and clean and a little sweet, with only a negligible bite.

The whisky was originally bottled and marketed in the U.S. as “Bourbon Mash,” but, bourbon rules being what they are, the name won’t fly with a whisky produced in Canada.

“In a tribute to our iconic Crown Royal Deluxe Whisky, each release under the Crown Royal Blenders’ Series will showcase a classic whisk(e)y style but with the famous smooth finish, allowing the whisky to stand on its own,” Diageo, which owns Crown Royal, says in a news release.

At 80-proof, it’s characteristically smooth, not unlike many Canadian blends, with a distinct nose of sweet apple and a taste of dried fruit and caramel. It runs less than $30 in the U.S., and it’s a good whisky, good for both sipping and mixing.

"Crown Royal Blenders’ Mash showcases the warm vanilla and subtle oaky notes of our beloved corn-heavy whiskies — among the most flavorful and complex of the five unique whiskies that comprise Crown Royal’s signature blend," the release says.

"While it's made with an emphasis on a bourbon style of corn mash whiskies," says Stephen Wilson, director of Whisky Engagement for Crown Royal, "the process includes aging in both new and used oak barrels, and we couldn't be prouder of the outcome."