"So Red The Nose," the roaring 30's fabled cocktail book; recipes by Hemingway, Burroughs and other legends.

Published during that alcohol-surfed wellspring of the mid-thirties, So Red The Nose or Breath in The Afternoon, was a point of pride for the dazed and heavily intoxicated muckety-mucks in their Gatsby-like fandangos. Prohibition had robbed a society of dipsomaniacs the right to live up to their name for almost 15 years, and these noble world-class winos, the upper crust, needed to up their game in order to make up for lost time. Its rush job into the press was a way to reach down and grab that quintessential ideal that America was founded on:

Our right to get hammered, talk nonsense and do whatever we damn well please with our liberties.

For all claims, so Red The Nose was New York's high society's civil way of flicking off the Capitol during the holiday season; and, some of its most ingenious recipes were akin to grabbing their balls and telling Congress to lick their sack.

The two knaves, backed up by ESQUIRE — and jilted into the fray, with nothing but a compromised liver and faulty promised of rivers of booze far more educated than moonshine — were two rosy-cheeked authors, Sterling North and Carl Kroch. A couple headstrong journalists with a lifetime of hangovers to collect and rent to pay.

Their mission? Simple. Dig down into that abyss, that mighty well of despair where the boozers, the lush, and sponges call home and handpick the worst of the worst; those rare individuals with the amazing mutant power of out-drinking Captain Morgan and asking Jesus Christ,

"Hey, buddy, mind turning that Olympic pool over there into Italy's crazy juice? I have an afternoon to spare."

Then, after they singled those out, they'd sit down with the poster children of an AA's recruitment video, and kick back and "tipple-test" their cockamamy breed unique concoctions. If they survived, If Sterling and Carl - and their lab rat friends - didn't lose their sight, if the turpentine didn't play havoc with their inner workings, if the stars aligned in their favor, then their publisher would hand over a hefty sum to write a Holiday inspired cocktail recipe book.

The question? Who is psychotic enough, and prolific enough, to fit the bill. To gift us with that hook that will allow us to pass WMDs as forms of zesty libations? Who? Uhm...

A blink, a flash, inspiration hitting them just outside a bookstore. Of course, who else but Papa... Papa Hemingway and his madcap assortment of novelist devotees. Back in the 30's, authors were known for licking the bar counter when the bottle was dry, or, in Hemingway's case, to snort up the wooden alcohol soaked splinters while punching a bull in the nose.

As such, So Red The Nose's first page was born. 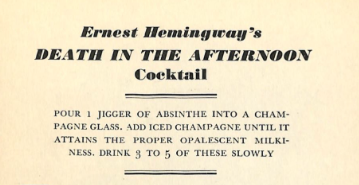 Nowadays, this odd curio has somehow slipped between the stools of yesteryears, washed away, with its delightfully embellished shakes, into the trash bin of the past. It can only be unearthed as a coffee stained PDF copy or a salvaged 70-page scroll, similar to the fabled Dead Sea ones, at Amazon shadiest corners. Retailers of spotty reputations, retailers with close familial relationships with overthrown and out-of-luck Nigerian Royalty, marketing the one-of-a-kind find at a 100 bucks; with a slight discount if you order three or more of their singular product. So Red The Nose, becoming - infused by its rare mystique and potent hard to find charisma - a tome similar to the Mad Arab's dreaded "Necronomicon;" both highly coveted, both impregnate by the mad ravings of their respective authors, and both carrying their fair dose of demons and nasty spirits... and, overall, both a hoot at any party.

"Cthulhu, how can you get drunk on beer? Will somebody move that Shoggoth away from the Karaoke machine!"

The index alone is a call to arms for every literary professor out there. A strident clarion flutter kicking those graybeards into high gear, kicking them in the rump, and, ultimately, kicking them into the dean's office. 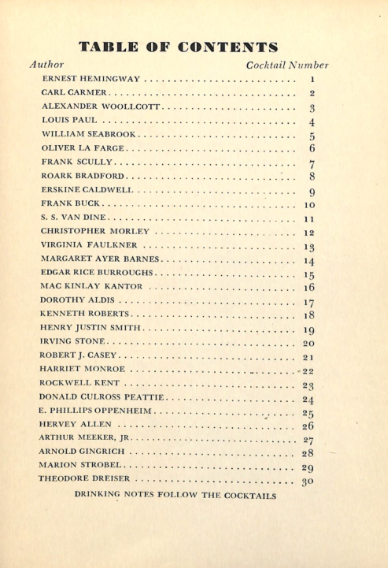 Arms waving a manifesto, sweat cleansing with the pallid emerald glare of that fickled French pixie, a musk bottled and branded by the street corner denizens:

"a bar! A pub! An ale house! We've been teaching these brats all wrong! Back to the basics. Back to the vine!"

Swatting away the excess of exclamations, not to mention their tenure boondoggle's tailspin into the trash bin, the lonely voice of reason proclaims:

"Goddammit Jim, I've seen this movie, what the hell did you read now? You are one impressionable prat." 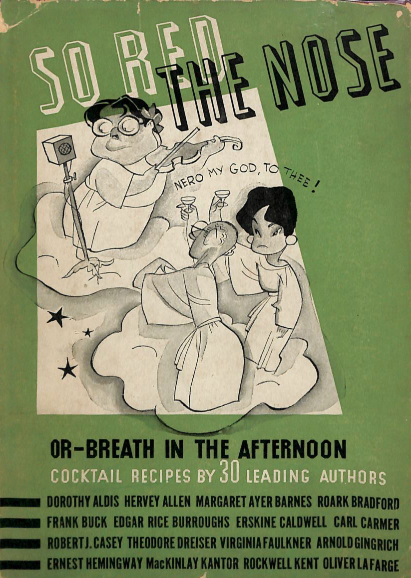 With that, this mad dash down memory lane has a leg to stand on, a proper introduction and the necessary wiggle room and excellent excuse to pop open a bottle of Malibu, mix in a teaspoon of Tang, maybe some Kentucky gold and call the following article a sensory experience sponsored by the likes of: Bacardi - although many consider it a poor man's rum -, Alabama corn whisky and Vermouth. In the words of a salty dog: "eat it, Google. The 30's literati knew that a proper VR experience started with a round, and usually went into overload when the Absinthe came into play."

In this post-prohibition miasma of satin see-throughs, swing bands, and rivers of Dionysius' "happy juice" our literary legends lay low their appetites, slapped their restraints to the curb and allowed their moxie to take the driver's seat; their ego urging each to: "chuck it! Chuck it! Screw the cops, it's not like we're holding... we are? Since Galveston? Damn, you sure know how to party." 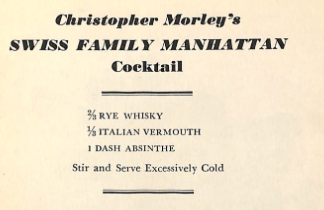 A cabal of wordsmith somehow juggling balls, each representing one reason for their liver's lethargic state. Where they overcompensating for that dry nightmare their elected officials had plunged them into? Where they simply perpetuating a transcendental personality quirk inate to their profession; cementing a brand? Or did they just want to continue the debauchery and ward off an epic hangover by never acknowledging it? Whatever the case, these hombres could outdrink any sailor, saint or satyr. Up went the balls, and, more times than not, some would fall under gravity's whims and clock that novelist's naughty noggin.

Nonetheless, a congregation, that despite or perhaps because of their galavanting ways with their cups, still managed to handle the English language with mastery and flare, took to the task like roaches on a downed Totsy Roll. Rum, and even Vermouth, fast becoming takeaway lessons for aspiring writers with dreams of Pulitzers and Nobles. The moral, these titans were peddling, "the next great American novel can be found at the bottom of a glass."

So Red The Nose, quickly shanghai's the attention of every lover of spirits quite easily. Affording, those adventurous enough, those with a slight suicidal tendencies, with historical mixes that could easily bridge any cultural gap; one spoonful alone of William Seabrook's Asylum (a cocktail devised to "... make you plenty crazy"), and the Left and The Right might be found breaking bread, and toasting that year's Oval Office placeholder, colorblind to the yokel's tie color. 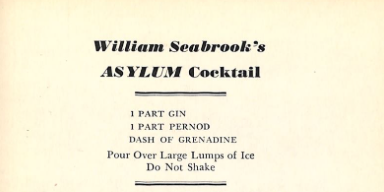 Another gem plucked from this curio. A "wish upon a star" recipe from a man who was instrumental to Disney's first forays in animation. 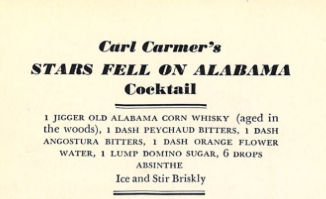 Or, as the author describes: "Cramer believes that all that absent-minded professor stories circulated about him are due to his frequent inhalations of the aforementioned drink."

Taking into account Carl Cramer's curious, and liable to not only put hair on your chest but a monkey on your back, concoction it's certainly no wonder that the man had a penchant for wearing different color shoes, and going to faculty meet and greet minus studs (an offense, it seemed, that back in the 30's solicited a response close to a Jihad).

And the strange beverages truck on. Absinth, you quickly realize, no doubt sponsoring the whole affair.

And these fueled, blazed out of their mind their mind legendary figures make no excuse and hold no qualms about their dangerously insane - but highly tasty - brews.

This cocktail was "Fiendishly plotted, with murder in mind." 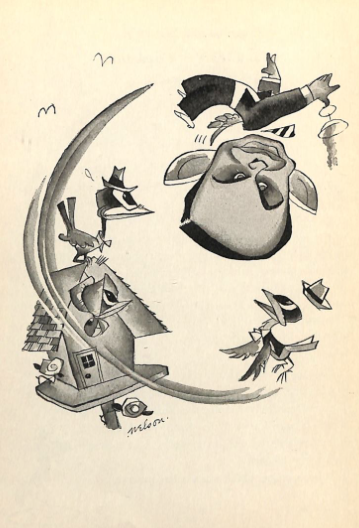 and, as a reader, you suddenly stop hard your jalopy on the road only to discover the broken bloodied remains of a Rudolph wannabe being sniper shot by the ghost of Hemingway; Papa wearing a bell dangling elf hat trying to get into Cuban hot stuff's pants. This book is a cocktail recipe mashup, inspired by giants, penned by a fan, and then edited by a Grindhouse enthusiast with a voracious taste for white Peruvian moon dust.

Or, since you simply cannot leave any article on that bizarre note, you let Max do what he does best and hand over the mic'. Handover the spotlight about this odd bit of a drinking history to its, I'm calling it, highly inebriated editor.

We "had hoped to include a Why Not Try God Cocktail. The name seemed to imply that deci-may-care, I'll-try-anything-once-sort of desperation added by readers willing to drink their way through this book. Furthermore, it would have given an opening for favorable reviews from our best pulpits...However, if a few of our clergymen are genuinely anxious to forward the cause of world peace and at the same time tell their audiences how to bring good cheer into the house..."

"Gimme that mic' back! You're making no sense! Give me another 'Death In The Afternoon' and will call it a day." 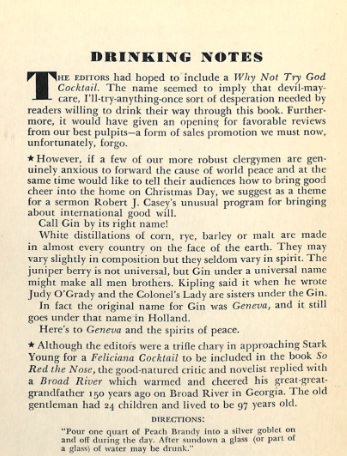 And after about 30 - no rational man should try recipes - our two savvy authors, by now forgetting what day of the week it is, waddle up to our chimney and stuff our Christmas stockings with ten more belly busters perfectly designed for that cheery season's spirit; a 3 page appendix of gibberish, Gin, grins and gleeful gulps

"That's a street post, Sterling. Stop drinking Donald Peattie's recipe. I swear, I pissed in my pants when you told the bartender, '... in enough whiskey to make you sing.'"

"Oh. What about that, is that Santa coming our way?"

"Ahh, run! It's Hemingway! Where does he keep getting those rifles!"