Contributed by Drinking In America on Jul 27, 2017 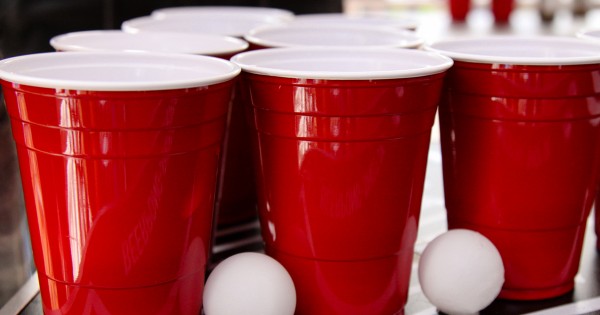 One of the best parts about summer is having the ability to enjoy being outdoors. It’s definitely appreciated by us East Coasters who are sentenced to being indoors for half the year. So getting together with friends, setting up in the backyard with drinks and enjoying each other’s company make the other half of the year extra special.

And for the days when you want to make things a little more interesting, here are a few DIY backyard games you don’t require you to put down your beer.

Giant Drunk Jenga
We’ve all played Jenga. But if using massive blocks isn’t enough of a twist, try skillfully removing pieces a couple cocktails in. Good luck.
How to Play:
Gather your giant Jenga pieces and have everyone write “rules” on about 1/3 of the boards. One rule per board and mix them up (rules, simple, more complex, just plain “take 3 sips from your drink”) If you don’t follow a rule you have to drink. Here are few examples for you:
– Stand on your right leg while pulling out your next Jenga piece (or for the rest of the game)
– Spin around three times, take a drink, spin around three more times
– When you find your next piece, turn around and pull it out facing “backwards”

Here’s a video on how to make a Giant Jenga set yourself: DIY Jenga

Giant Beer Pong
Beer pong is a popular drinking game so there’s nothing new here. However, in this version the cups are buckets that can be as large as trash cans and the ping pong balls are beach balls. Yup, it’s beer pong on steroids.

Luckily, this game requires no unique materials, so get creative and use whatever you have!

Want to add some spice to your beer pong game without going XXL? Try beer pong but the cups are on moving Roomba’s…

Spikeball
Think, ping pong meets hand ball. On a miniature trampoline. This game will get you working up a sweat if you play competitively. Add some alcohol and you’ve got yourself a fun packed day.