Elder Statesmen Or Old Codgers? A Look At (And A Taste Of) 4 New Super-Annuated Bourbons

Kentucky bourbon and Scotch single malts are two totally different animals, even down to how they spell "whiskey" (the American stuff employs the "e," Scotch doesn't). Take away the fact that Scotch whisky is made from malted barley and bourbon is made primarily from corn and you've still got a world — well, a continent, anyway — of difference. The two biggies are weather and wood. Bourbon must be aged in new charred American oak barrels. After those new barrels are used, they're shipped off to, you guessed it, Scotland! Those once-used barrels are then used a second time to age Scotch whisky, which gets some of the bourbon influence, but it also gets less of the tannins from the oak. Then there's the weather. Scotland is chilly and damp year-round, while Kentucky has, you know, seasons. It gets hot in the summer, it gets cold in the winter. That more temperate climate helps whiskey age faster in, say, Bardstown than it does in, for instance, Islay.

What I'm getting at here is that a 21-year-old Scotch whisky can be a magnificent creature, robust and in its prime, while a 21-year-old bourbon is usually long past retirement age, and may be so woody that you'll feel like picking splinters off your tongue. But in the whiskey biz, age connotes rarity and exclusivity and quality... even when it doesn't. So while it may just be that more bourbon drinkers are gravitating to oak-forward whiskeys, I'm guessing that it's the impressive number on the bottle that sells them rather than the taste.

That said, it is possible to have a delicious bourbon that's old enough to have its own drivers license, although given the DUI laws I can't see any of these bottles passing a breathalyzer test. Here are four new extra-old bottlings, with a combined age of more than 100 years. None of them are cheap, and a couple of them are ridiculously expensive. But are they worth drinking? Keep reading to find out.

MICHTER'S 20 YEAR OLD BOURBON (57.1% ABV, $700). This is the first release of the 20-year-old in more than two years (and the third release overall). When's the next one? Whenever Michter's distiller Pam Heillmann and Master of Maturation Andrea Wilson decide there's a batch worth bottling. That's what makes picking up their rarer, older whiskeys both rewarding and frustrating — working from a standpoint of quality rather than market demand means you're not always going to find a bottle when you want one (or when you can afford it). But when you find it, you know it's going to be special. Michter's has its own distillery, but none of its own juice is old enough to release yet; the 20 year old was sourced from an undisclosed distillery or distilleries many years back. But Michter's has a distinctive big, bold flavor that's certainly present here. It's spicy with a sweet underbelly of dark fruits (notably cherries) and baking spices, woody but not overly tannic, and it sports a delightfully long caramel-and-oak finish. Yeah, it's very pricey for a bourbon. But start digging around in the couch for change, because who knows when this will come around again.

ORPHAN BARREL: RHETORIC 25 YEAR OLD BOURBON (45.5% ABV, $140). The crown jewel of Diageo's oft-maligned Orphan Barrel series was first released in 2014 as a 20 year old. The plan was to keep releasing a new batch every year to see how wood aging affects the liquid. The results were unpredictable; the 22 year old is to my taste buds the oakiest one of the bunch, while the 23 and 24 got progressively less woody. The experiment has reached its conclusion with this quarter-century old bottling. And it's probably just in time. Even at its liveliest, Rhetoric was straddling a fine line between oaky and over-oaked. The 25 still, miraculously, is on the "still drinkable" side of the divide, and this is definitely better than drinkable. Rhetoric was distilled at the old Bernheim distillery in Kentucky between 1990-93, aged at the legendary Stitzel Weller warehouse. I wish I could have tasted it when it was younger and more sprightly. It's certainly not bad — oak-forward, of course, with notes of baking spices and burnt caramel, and a pleasant medium-length finish. And while $140 may seem like a lot, for a 25-year-old it's quite the bargain. Whether you'd want it for everyday drinking depends on your fondness for oaky bourbons, but for impressing your friends and pulling out at special occasions, it's a good value. 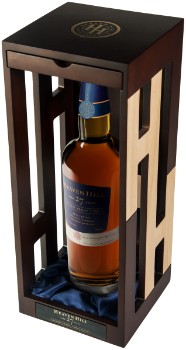 HEAVEN HILL 27 YEAR OLD BOURBON (47.35% ABV, $400). Talk about history in a glass! The liquid in this stunning package (check out the pic above) was distilled in 1989-90 by the late Parker Beam, one of the titans of American whiskey, at the Old Heaven Hill Springs Distillery, which was destroyed by fire (along with about 90,000 barrels of whiskey) in 1996. This batch comes from 41 barrels, of which the angels had taken a big enough share so that less than 3,000 bottles' worth of bourbon was left. Because they were (mostly) aged in cooler parts of the warehouse, the lower temperatures resulted in alcohol evaporating from the barrels faster than water, resulting in a surprisingly low barrel proof of 94.7. This is whiskey that can never be replicated. But how does it, um, taste? Pretty oaky, to be sure. 27 years sitting in a barrel will do that to just about any bourbon. But let it sit in the glass for a bit and tobacco, leather, cloves, and dark chocolate start to emerge as well. The finish is long and pretty tannic, with lots of peppery oak lingering on the palate. All in all, it's a very respectable bourbon. If you're looking for an everyday sipper, Heaven Hill makes a whole lot of cheaper, easier drinking bourbons that will fit the bill. But if you're a whiskey collector, the bottle and box will look pretty awesome on display, and the backstory is a great one.. 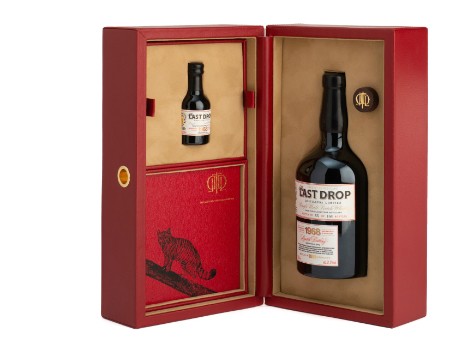 THE LAST DROP 1982 BOURBON (45% ABV, $4,000). Finding a bourbon that's old enough to run for president is quite extraordinary, but that's not quite the story here. This vintage Buffalo Trace juice may have been distilled during Ronald Reagan's first term, but apparently it was removed from the barrel "at its peak" (I've ascertained that it was 20 years old at the time) and stored, presumably in stainless steel, thus halting the aging process. The Last Drop is famous for tracking down incredibly rare Scotch whiskies and the occasional cognac, but this is their first American whiskey, limited to a microscopic 44-bottle run. It comes on sweet and soft, with prominent soft cocoa, baked apple and pecan notes, but as it drifts throatward, the dry, peppery oak becomes more pronounced, culminating in a long, spicy finish that leaves a lingering taste of oak and dark chocolate. It's an elegant whiskey, with hints of youth still evident despite its elder statesman status. The package is, as with everything The Last Drop does, stunning, and it includes a 50 ml bottle to go with the 750, so you can taste the liquid without cracking the bottle open. They understand collectors! And hoarders, too....