Contributed by The Alcohol Professor on Nov 07, 2018

DrinkWire is Liquor.com’s showcase for the best articles, recipes and reviews from the web’s top writers and bloggers. In this post, the Alcohol Professor offers fun, Queen-inspired cocktails. 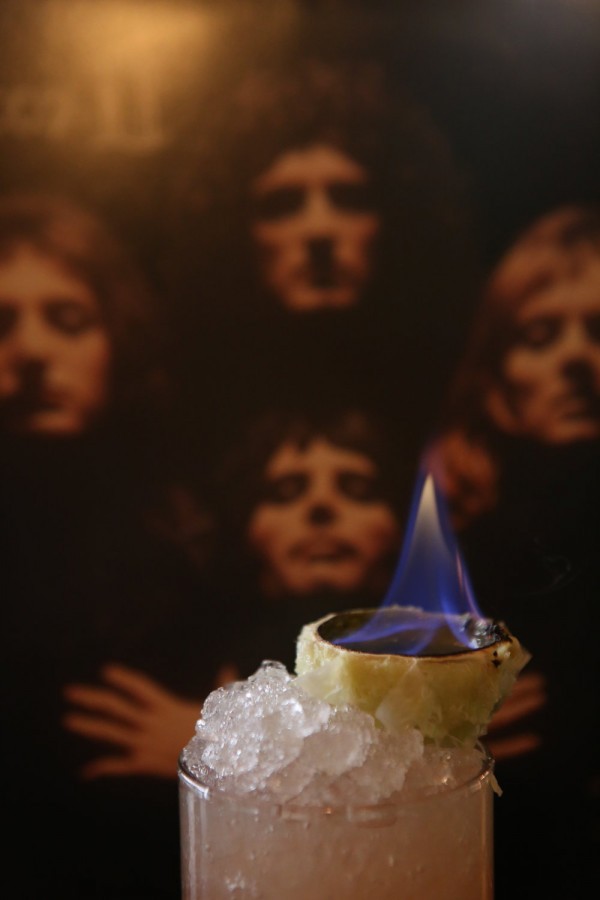 The Queen biopic Bohemian Rhapsody is in theaters now. Here are song-inspired recipes for the drinks you’ll need after watching it, or for the listening party of champions.


"I dreamed I saw on a moonlit stair
Spreading his hands on the multitude there
A man who cried for a love gone stale
And ice cold hearts of charity bare
I watched as fear took the old men's gaze
Hopes of the young in troubled graves
’I see no day,’ I heard him say
So grey is the face of every mortal"— Queen, “The Prophet’s Song”, 1975

I like to think there’s a bit of Queen in all of us. It’s that part of our soul that wants to sing at the top of our lungs and let all sense of modesty be damned. Some of us are just less shy than others about channeling our inner queen, but few could argue anyone was better and bolder at it than Freddie Mercury.

When the band Queen was first formed in London in 1970, the word “queen” was still most commonly used in parlance in the monarchal sense. The Zanzibar-born singer Farrokh “Freddie” Bulsara already had a clear musical direction when he joined what already existed as the band Smile with Brian May on lead guitar and vocals, Roger Taylor on drums (no relation to the drummer of the same name in Duran Duran), adding John Deacon on bass. Bulsara adopted the stage name Freddie Mercury and the band became Queen, expanding on Smile by becoming more elaborate and progressive in their musical compositions and performance theatrics. Their debut album was a mix of bombastic, catchy rockers, big ballads and briskly-paced numbers with elaborate middle bridges, and lyrics based on folklore. The fairytale-ish concepts were working for them as a shtick by Queen II, and so were the borderline operatics. So much so, they completely got away with it on their third record A Night At the Opera which includes that beloved six-minute (alright, 5:57), four-part harmony, masterpiece “Bohemian Rhapsody.” In 1992, Wayne (Mike Myers) and Garth (Dana Carvey) brought the classic to life in the famous carpool sing-a-long in the film Wayne’s World. The scene worked so well because, come one, that song is so infectious you have to be completely devoid of fun (or the current Vice President of the United States), not to want to belt out all the “Galileos” every time you hear it in a car.

Except that precious few of us could ever possibly match Mercury’s vocal talent. In 2016, a scientific study was performed on a singer with a similar range who could imitate his voice, along with analysis of Mercury’s isolated vocal tracks. It all but debunked the myth that Mercury could sing in four octaves, but it proved through close-up camera footage of the stand-in singer’s larynx that the reason it sounded like he could was because the ventricular folds in his throat were vibrating at such a rapid pace that it created a huge range of subharmonics few singers ever achieve, even through intense training in vibrato and tremolo. So basically he was using places in his throat to sing that most people don’t even know they have places. One article sites that Tuvian throat singers are the only ones trained specifically to use that technique. In his lifetime Mercury probably never knew the real reason why he was such an astounding vocalist, but it’s been said he refused to fix his famously pronounced overbite for fear it would compromise that ability.

Sadly, Mercury would never live to see the most passionate fan tributes of the 1990s onward. He was first diagnosed with AIDS in 1987 (not at the time of Live Aid in 1985, as the film suggests) and since then, despite a few public performances that still showcased a powerful voice, it was clear something was causing the already slim singer to lose an alarming amount of weight. Always a private person, he refused to make a public statement about his health to the press and became more withdrawn. On November 23, 1991 he released a statement to address all the conjecture surrounding his public absence stating that he had tested positive for AIDS. “I felt it correct to keep this information private to date to protect the privacy of those around me,” said Mercury. “However, the time has come now for my friends and fans around the world to know the truth and I hope that everyone will join with me, my doctors and all those worldwide in the fight against this terrible disease.”

A recent episode of Will and Grace contained a subplot about Jack’s (Sean Hayes’) grandson, Skip (Jet Jurgensmeyer), who wants to perform “Diamonds Are a Girl’s Best Friend” at his middle school talent show in Texas. Jack is against it, fearing homophobic backlash among geographically conservative classmates, parents and school administration. Will (Eric McCormack) digs into his past, telling the story about how decades later, he’s never gotten over wanting to perform as Freddie Mercury at his school talent show, but his mother refused to allow it. Spoiler alert: Skip does perform the song, pink dress and white gloves and all, and the audience is enchanted. This prompts Will to burst into the auditorium as Mercury in full Live Aid glory—with white tank top, tight acid wash jeans and fake mustache—much to the delight of the room. “Don’t let anyone ever talk you out of being you,” Jack finally says.

With such an impressive musical legacy and inspiring lack of modesty, we should all be thankful no one ever talked Farrok Bulsara out of being Freddie Mercury, and that he met just the right group of musicians to bring that voice and character to the world.

"It feels like 'Don't Stop Me Now' should be a tiki, in-your-face sort of drink, flaming and red like the rocket ship on its way to Mars in the song." 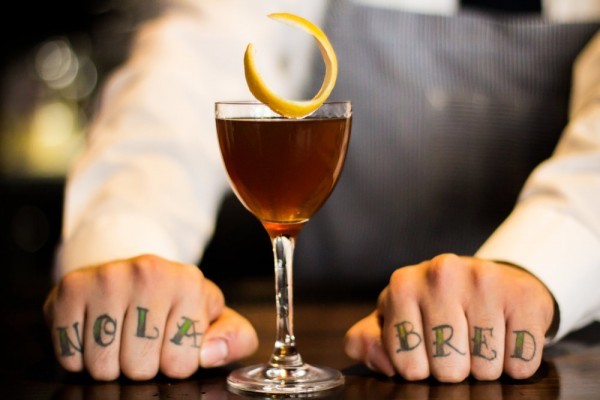 
Combine rums, lime juice, orgeat, pineapple juice and amaro in a mixing glass and fill with ice. Shake vigorously until well chilled. Strain into an Old Fashioned glass filled with crushed ice. Garnish with float of Campari. Nestle inverted lime half in ice and fill with absinthe. Carefully light the absinthe shot on fire (and extinguish before consuming!).

Stir all ingredients with ice until well chilled. Strain into chilled Nick and Nora glass. Express lemon oils over drink and garnish. 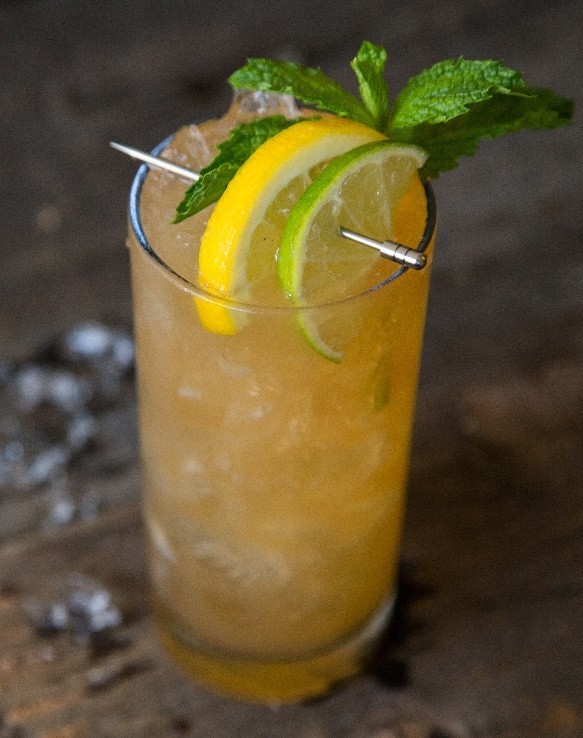 
To complement the epic masterpiece that is at times demure and others grandiose, Swet chose to combine a classic British gin (“a nod to the Queen,” he says) with mint and ginger and top it off with Pilsner Urquel Czech beer to represent the Bohemian people.

Combine gin, liqueur and juices in a shaker with ice and shake until well chilled. Strain into a julep tin or tall glass over crushed ice. Top with beer. Grate fresh nutmeg over top and add garnishes.

Mitchell says she chose these ingredients because gin and dill are such an overlooked love story of flavors. 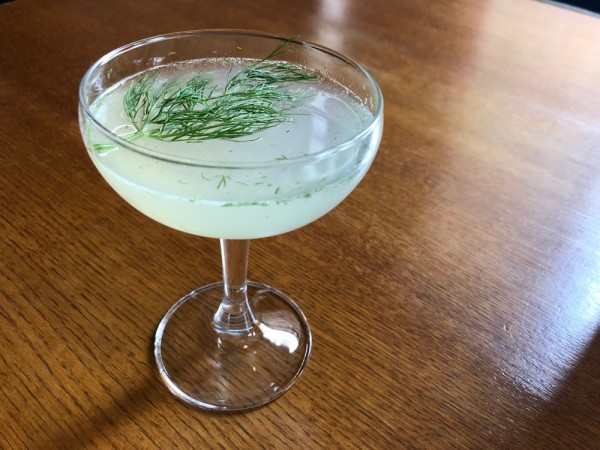 photo by Chelsea Morse, the Spaniard

Sergi organized a bartenders-only screening of the movie was shown Nov. 5th in collaboration between the Cocktail Queen female bartending competition sponsored by Beam Suntory and Landmark Atlantic Plumbing Cinema. It should also be noted her dog’s name is Freddie Mercury.

Combine all ingredients in a mixing tin and shake vigorously. Double strain into a chilled, stemmed cocktail glass of your choice. Garnish with a moustache sticker on side of glass. Side of pretty cabinet with Moët et Chandon, optional. 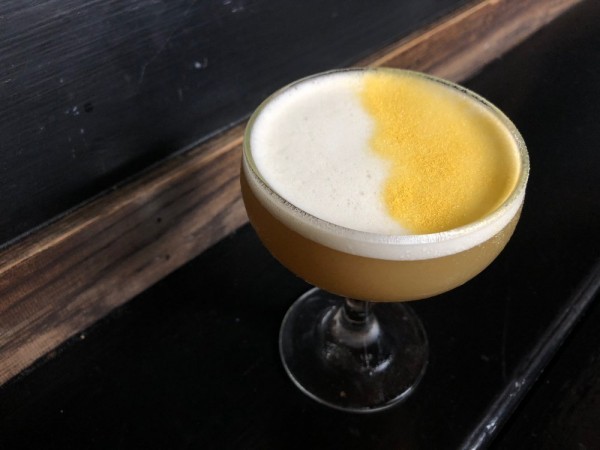 
Another One Bites the Dust

"Queen, mainly Freddie Mercury, was extravagant and wild. I feel this covers both of those aspects with a sweet and punchy dessert cocktail. It is essentially a biscotti flip." - Robert Crowe

Combine egg, Cognac, simple syrup and bitters in a shaker tin, without ice. Dry shake to emulsify the egg. Add ice and shake vigorously until well chilled. Double strain into a chilled coupe. Dust half the drink with gold powder.

Combine Cognac and biscotti in a closed container and steep overnight. Strain through a fine sieve. Store, refrigerated, up to one week. (use leftovers in a Thanksgiving punch!)

Combine syrup, vanilla beans and cinnamon stick in a closed container to steep overnight or longer. 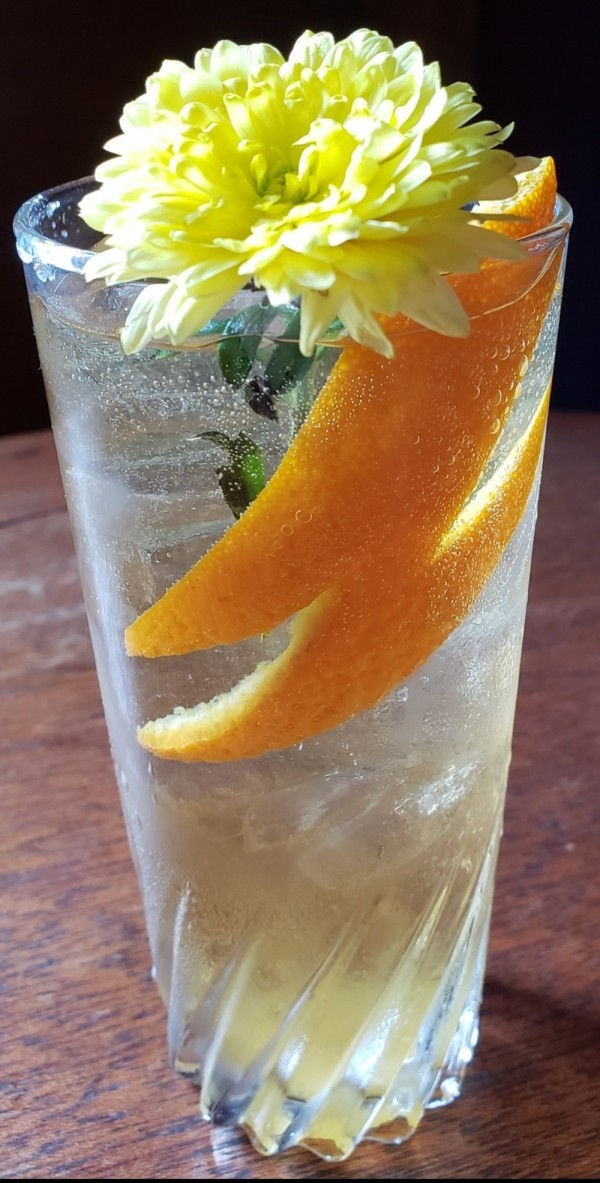 This Is Ourselves, photo by Carol Donovan


(inspired by “Under Pressure”, co-written with David Bowie)

“I sought to incorporate pressure into the cocktail in multiple ways, but also to take all of the pressure off the preparation by making it simple to create at home. We put pressure on the fruit when we muddle it into the glass, and then of course the Champagne is under pressure during storage… Hopefully you'll enjoy this, and perhaps it can inspire us to change our way of thinking and to ‘give love, give love, give love.’” - Carol Donovan 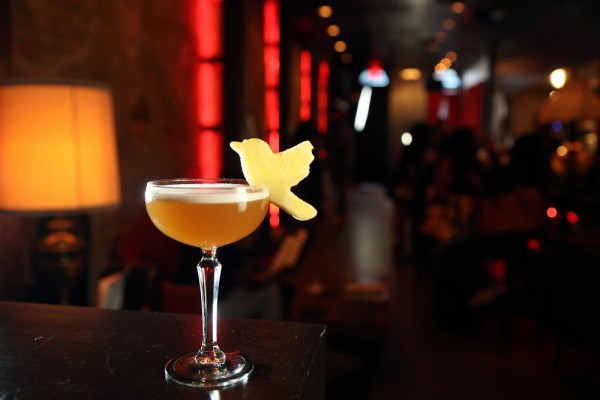 To prepare this Jungle Bird-inspired drink, shake all ingredients vigorously, which will mix the drink and foam the pineapple. Serve over ice in a rocks glass. “Garnish with a pineapple bird and make bird sounds, flap your wings, whatever you want to do,” says Neff.

King of the Impossible 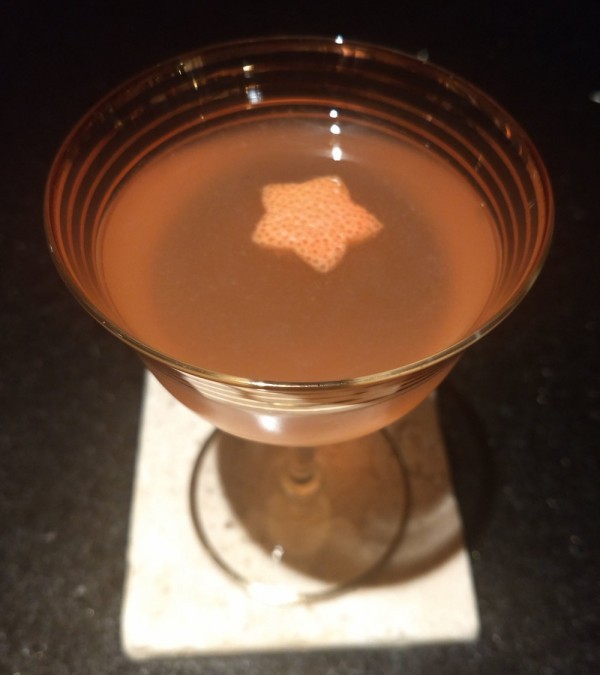 King of the Impossible, photo by Frederic Yarm

“I tried to channel the woodsy and exotic feel of the wood beast scene on Arboria [in the film]. When I honed in on cachaça, I was inspired by Ben Sandrof’s Esmeralda at Drink, which utilized a hint of Scotch-esque smokiness to complement the cachaça base.” - Frederic Yarm

Shake with ice, strain into a cocktail coupe, and garnish with a grapefruit twist.

Place strong steep of a Lapsang Souchong (or other smoky tea) bag in 4 oz hot water (around double strength) for 5 minutes. Remove tea bag and mix in an equal volume of sugar, stir, and cool. 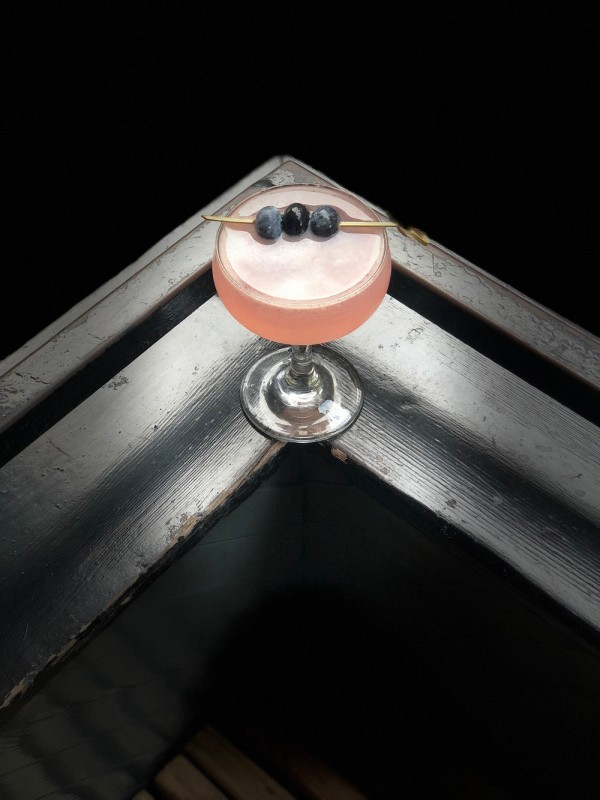 Pierson chose Champagne, what’s been said to be Mercury’s drink of choice, for a tribute to his favorite Queen song.

Muddle blueberries in a mixing glass. Add lemon juice, Cointreau, gin and ice, and shake until well chilled. Double strain into a flute or coupe glass, and top with Champagne. Slap a mint leaf between your hands to release the aromatic oils, use as garnish.

Queen-inspired Boilermakers and Highballs (to keep yourself alive) 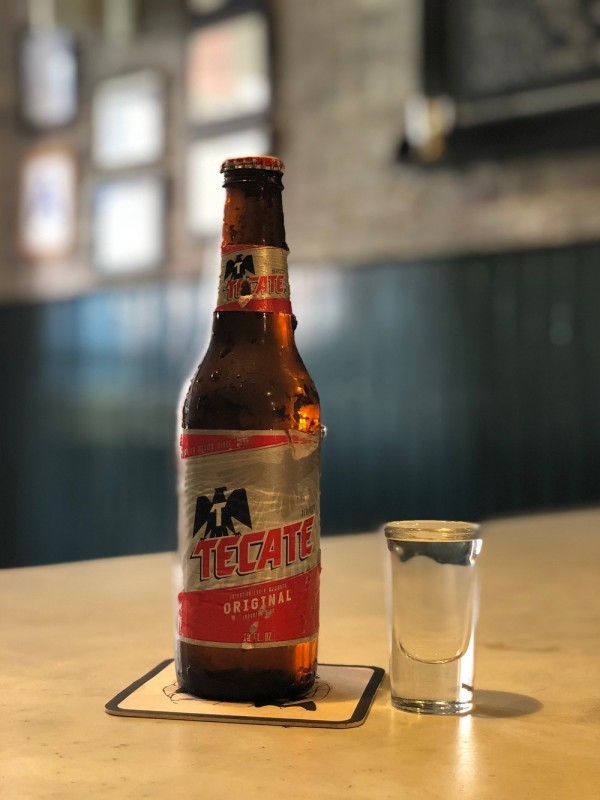 
We Are The Champions

Freshly brewed tea of choice, cooled, topped with bitter lemon soda, to get safely home from the bar on your bike - Amanda Schuster