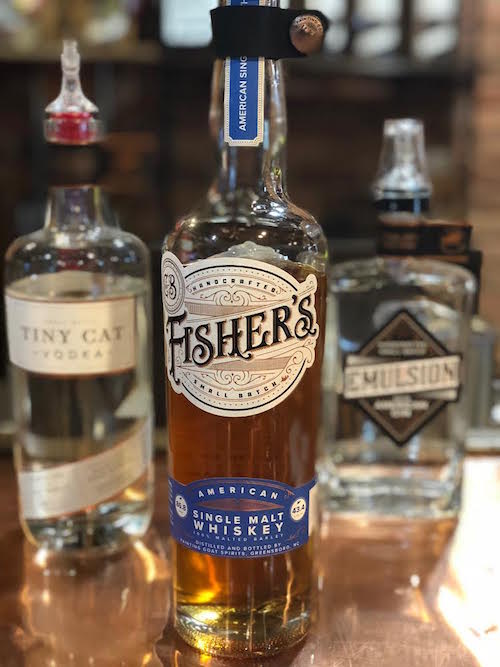 History made by hand. By people who give a damn.

Corny and trite? Maybe to some.

But to people like the Normans, and, well, me, it all makes perfect sense.

He’s the head distiller, a creative mastermind grounded firmly in legacy and tradition.

The Normans — Andrew; mother Shelley; and father Bill — rented their current space, in the heart of downtown Greensboro, in October 2015 and started distilling their first product, a clean and smooth wheat vodka called Tiny Cat. Emulsion Gin — a new American-style gin, lighter on the juniper and heavier on the cardamom and coriander, with a little German chamomile and some lemongrass, cucumbers, and orange peel — plays off the vodka.

A bourbon and a rye are on the way.

“We’re going to do it very traditionally,” Bill told me a couple years ago as I was researching my book, “Still & Barrel.” (Blair Publishing 2017)

“Most people who make whiskey typically leave it in the barrel for about three months. We know after three months we could probably do something, but we really want to be able to hang on about a year for that single-malt whiskey.”

And make that about a year and a half.

Fainting Goat released 832 bottles of the 86.8-proof Fisher’s small batch single in December, and it sold out in 10 days.

The barley is sweet but in a wonderful way, and the nose reminds me of grandma’s kitchen a couple of days before Christmas. The mouthfeel is full and lingers just long enough to perfectly enhance a second sip.

“To me, personally, I get a ton of vanilla and honey on there, a little bit of caramel, some baking spices, as well,” Andrew says. “I'm picking up a lot of sweet, peach tea here recently.”

Fisher’s is named for C.B. Fisher, who came to Greensboro in the 1800s and, says the bottle, “led men to battle, gambled his life savings on a gold mine, turned swampland in to playgrounds, and left a mark everywhere he went.”

"We take such great pride in being a true grain to glass distillery,” Andrew says.

In other words, these are people who give a damn.