Alacran Tequila has augmented its lineup with a new Reposado entry. Made with 100% Weber Blue agave, Alacran Reposado is aged for four months in ex-Bourbon oak barrels and packaged in a hand-labeled and numbered bottle. The new extension marks the fourth offering in Alacran’s stable, joining Tequila Blanco, Mezcal Joven and Cristal Añejo. Launched in the U.S. in 2011, Alacran’s key markets include New York, Miami and Texas.

Prestige Beverage Group is extending its Kinky brand of RTD cocktails with two new flavors and a higher-alcohol Extra Kinky range. Kinky Cocktails, packaged in 12-ounce-bottle six-packs and carrying an abv of 5%, currently include Pink, Blue and Gold expressions. New to the line this spring are Red—a mix of watermelon and strawberry—and a limited edition Summer variant mingling coconut, lime and pineapple. Also joining the brand is 8%-abv Extra Kinky, which includes three flavors and is offered in 16- and 23.5-ounce cans. Kinky Cocktails are expanding their territory this year to include metro New York and Florida. 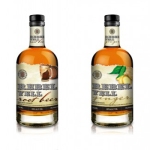 Diageo has partnered with Hollywood director Brett Ratner for the launch of a new whiskey brand, The Hilhaven Lodge. The new whiskey is a blend three different whiskey styles that span three decades—Bourbon from the 2000s, Tennessee whiskey from the 1990s and rye whiskey from the 1980s. The packaging is inspired by the famed Hilhaven Lodge located in Beverly Hills and features a wood cork cap. The Hilhaven Lodge (40% abv) is hand-bottled at Louisville’s Stitzel-Weller distillery and will initially be available in limited quantities on- and off-premise in California and Florida for a suggested retail price of $50 a bottle.

Proximo Spirits will launch a new American whiskey offering from DeLeon Tequila founder Brent Hocking on May 1. The new product, on which Hocking has collaborated with rapper Drake, is called Virginia Black Decadent American Whiskey, and will retail around $35 a bottle. 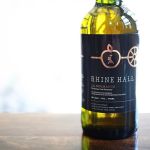 Chicago-based Rhine Hall Distillery, known for its fruit brandies, is introducing a fortified apple cider called La Normande, a French pommeau-style cordial due to launch on May 1. The cider, aged for nine months in Bourbon barrels from Heaven Hill, is bottled at 18% abv and priced at $33 per 750-ml. bottle. The company, owned by the father and daughter team of Charlie and Jenny Solberg, distributes only in Illinois, Indiana and Utah. Its lineup includes peach, plum, cherry, pear and mango brandies as well as grappa.

Diageo’s Smirnoff Ice has extended its RTD lineup with a new range of non-carbonated malt beverages. Currently rolling out nationwide, Smirnoff Ice’s new Electric Flavors series features two expressions, including Electric Mandarin and Electric Berry. Both 5%-abv offerings are made with natural flavors and sweeteners, as well as coconut water, and are available in four-packs of 16-ounce re-sealable plastic bottles ($8.99).

CIL US Wine & Spirits, the U.S. subsidiary of Cognac producer Camus Wine & Spirits, has partnered with Denmark’s Danzka Vodka for the U.S. release of its namesake offering. The Scandinavian-style vodka is made with 100% whole-wheat grain through six-column distillation and triple filtered. The lineup—which includes Danzka, Danzka Apple, Citrus and Cranraz (all 40% abv) will launch in 750-ml. and 1-liter bottles in New York, New Jersey, Massachusetts, Florida and Illinois this year, with a wider rollout planned for 2017.

Blair Frodelius is a professional full-time musician, an award-winning mixologist, USBG Spirits Professional, BarSmarts Live & Wired graduate. Several of his original cocktails can be found in the 75th Anniversary Mr. Boston Official Bartenders Guide, and one inspired by Harry Craddock in the Mixellany publication The Deans of Drink.