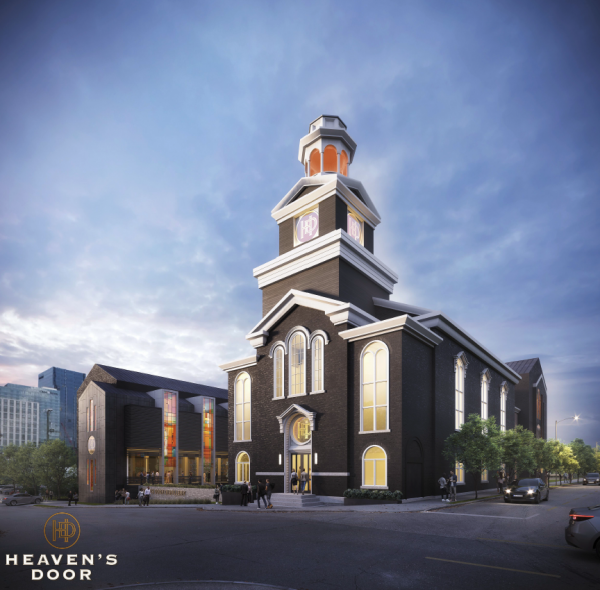 Heaven’s Door Spirits, developed with legendary musician and artist Bob Dylan, on April 9 will celebrate the 50th anniversary of the release of Dylan’s iconic album, “Nashville Skyline,” along with the announcement of the Heaven’s Door Distillery and Center for the Arts in downtown Nashville — scheduled to open in Fall 2020.

The new center, a news release says, will feature the Heaven’s Door craft distillery, including guided tours, a whiskey library, restaurant and a 360-seat live performance venue. It’s all part of a renovation project to the 160-year-old Elm Street Church that will also display pieces of Dylan’s paintings and unique metalwork sculptures.

“We’re thrilled to celebrate the anniversary of ‘Nashville Skyline’ with our own addition to Music City’s skyline”, said Marc Bushala, CEO of Heaven’s Door Spirits. “Nashville is the natural home for the Heaven’s Door distillery and the Elm Street Church is a fitting home for Dylan’s visual artwork. We spent years looking for a property that truly captures the essence of the Heaven’s Door brand, and when we finally found the deconsecrated church in SoBro, we immediately knew that it would be the perfect physical and spiritual center for the brand, and Bob’s art.”

Widely regarded as one of Dylan’s greatest reinventions, “Nashville Skyline,” his ninth album, brought country rock music to the masses and is credited with changing the Nashville music scene forever, the release says. Described by Rolling Stone as having achieved “the artistically impossible,” the album showed a new, more relaxed side of Dylan, which inspired an era of music revolving around storytelling, and changed the way people thought about country rock music.

Each of the brand’s three inaugural expressions has a direct tie to Tennessee — through distillation, aging, barrel finishing or bottling, the release says.

The Heaven’s Door portfolio of whiskeys is available nationwide and online via ReserveBar.com. Also visit www.heavensdoor.com or engage with the brand on Instagram, Facebook or Twitter.