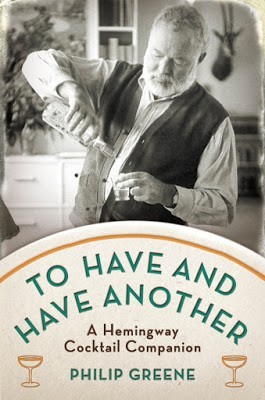 Got tight last night on absinthe and did knife tricks. Great success shooting the knife into the piano. The woodworms are so bad and eat hell out of all furniture that you can always claim the woodworms did it.

The similarity between woodworm and wormwood is, of course, intentional.

He is also credited with the creation of the Death in the Afternoon cocktail, of which more later.

With July being both the anniversary of his birth (116 years ago today on July 21, 1899) and his death (July 2, 1961), it seems an appropriate time to dig a little deeper into Hemingway and absinthe. And the best place to start was with Philip Greene, author of the book shown above: the key book for students of Hemingway and cocktails (and one which I warmly recommend).

I was fortunate to be at Philip's seminar at Tales of the Cocktail in 2013, and have corresponded and Skyped with him more recently.

The first time appears to have been when he was a journalist working for The Toronto Star and wrote about the Great Aperitif Scandal in Paris in an article published on August 12, 1922. The full article is online here. 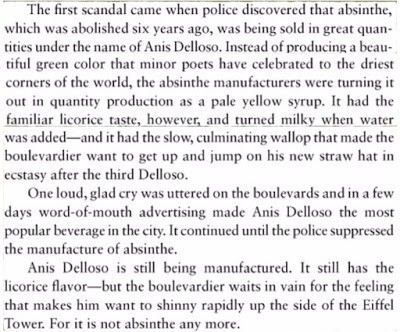 This is historically very interesting since it is one of the few contemporaneous records of moonshine absinthe made, sold and enjoyed in Paris after the 1915 ban.

I then asked about Hemingway's exposure to absinthe as a drinker living in Paris. Some of this is clearly reflected in his first novel.

While in Paris, Hemingway moved in creative circles, including Picasso, James Joyce with whom Hemingway frequently embarked on "alcoholic sprees," and F. Scott Fitzgerald who inspired him to write his first novel. On his birthday in 1925 (90 years ago today), Hemingway started writing The Sun Also Rises, and this includes many references to absinthe and/or Pernod being enjoyed in both Paris and Spain. Of course absinthe was legal in Spain and illegal in France, so the references (which would have been at least partially based on Hemingway's encounters with absinthe) are quite illuminating. Hemingway is claimed to have been to so many bars in Europe that there is even a bar in Madrid called “Hemingway never drank here!” In Paris he drank at Harry's New York Bar, The Ritz, and many other top hotel bars (who may not have served absinthe openly after the ban), but in The Sun Also Rises the most notable encounters with absinthe are at Café Napolitain and Closerie des Lilas where absinthe/Pernod are enjoyed quite openly. Both these bars were real bars that still exist today.

Some observations and questions:-

One wonders whether these bars would have served absinthe to Hemingway and others as openly as they seem to in the book. Philip believes absinthe would have been served more discretely, and I would tend to agree.

Were these bars selling real absinthe circa 1925? Pernod is described in the book as being "greenish imitation absinthe," which might sound like pastis. But pastis was not launched in France until the 1930's. Maybe the Pernod Hemingway writes about was a fake?

And when Hemingway writes "Pernod" in The Sun also Rises, it also seems possible that the word is being used as a generic, rather than the brand (when not at the start of a sentence, Pernod is always written here with a small "p").

As for Hemingway's own experiences of absinthe, maybe they are reflected in his writings?

As the action in The Sun Also Rises moves from Paris to Pamplona, Spain, one evening the main characters drink at least four absinthes each (in the course of one page!). The novelist writes:-

"I was drunker than I had ever been ... the room was unstable unless I looked at some fixed point ... I .. lay on the bed. The bed went sailing off." .... "The world was not wheeling any more. It was just very clear and bright, and inclined to blur at the edges."

Of course these descriptions may not be much more than average drunkenness but the description "very clear and bright" seems to go beyond that, and may seem familiar for some absinthe drinkers.

Absinthe appears in later Hemingway books, including The Strange Country and The Garden of Eden (both published posthumously). It is especially interesting, in the latter, to read Hemingway's account of why absinthe should be "louched" correctly:- 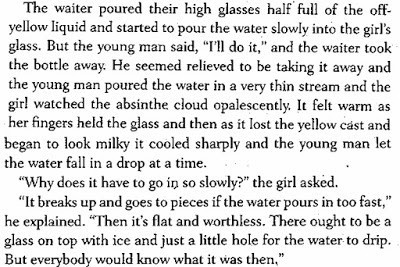 This section is set in absinthe-legal Spain, but after the characters go back to France, they do not have access to absinthe. The author writes:

"He would wait for her and have a drink out on the terrace after his work. It was impossible to drink pastis after absinthe and he had taken to drinking whiskey and Perrier water."

"Impossible to drink pastis after absinthe?" The context makes it clear that, in Hemingway's opinion, absinthe drinkers would not be satisfied with pastis. A sentiment that must be interesting for those companies that produce both absinthe and pastis!

The Death in the Afternoon

In 1935 (coincidentally the year that La Clandestine was first made illegally), the Death in the Afternoon is born. This was Hemingway's contribution to a book of celebrity cocktails "So Red the Nose, or Breath in the Afternoon." The description of the drink's genesis is shown below:-

Hemingway loved champagne and absinthe, as well as rum, but some doubt whether he would really have liked the idea of mixing champagne and absinthe. Views of the cocktail are sometimes polarised among absinthe lovers, and champagne lovers may be even less positive! Read a little more on the Death in the Afternoon (and my variant) in the second half of this article.

In all the rest of Hemingway's writings published to date, there are no ways to drink absinthe other than the classic serve (Hemingway did not use a sugar cube) and the Death in the Afternoon. He created other cocktails (e.g. Death in the Gulf Stream with Genever, lime juice, simple syrup, Angostura bitters and zest of lime), and was known to drink many other cocktails (especially those with rum). He frequented many of the world's top bars (including London's Savoy and The Ritz, and Havana's Bar La Floridita) and would surely have met the inventors of the Corpse Reviver 2, the Monkey Gland, and other famous absinthe cocktails, but seems to have never mentioned these or any other way of enjoying absinthe.

I asked Philip if Hemingway might have enjoyed absinthe any other way, and he confirmed that while he knows of none, Hemingway's letters MAY include others. His letters are released on a "drip-feed" basis every few years in "Selected Letters;" more might therefore appear in the future.

For now, however, Hemingway's absinthe drinking is like many of the drink's biggest fans: the traditional, drip serve only (with the one exception of the Death in the Afternoon). I had wanted to find evidence of Hemingway as an adventurer within absinthe as in his life, but instead I found him to be respectful of absinthe and of its traditions (even if he may have over-indulged a few times). Maybe his respect is partially due to absinthe's legal status in the USA and France at the time. And maybe he really was a purist at heart.

I suspect, however, that Hemingway might have enjoyed The Old Man and the Sea, a new absinthe and champagne cocktail inspired, in part, by The Death in the Afternoon. Developed by our friend, Dave Whitehead, at Melbourne's Polly Cocktail Bar as part of their Hemingway celebrations this week. Cheers, Dave! 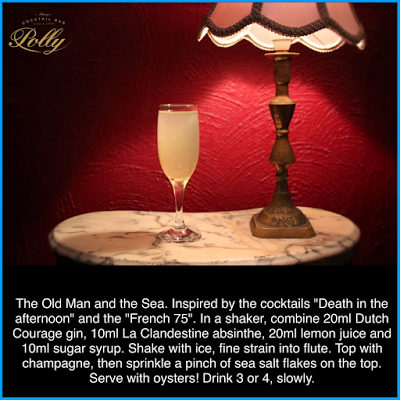 And thanks for your help, Philip.You've chosen a fascinating subject to specialise in. Cheers! Salud!