Intrigue Nightclub Whips Up Coffee With a Kick 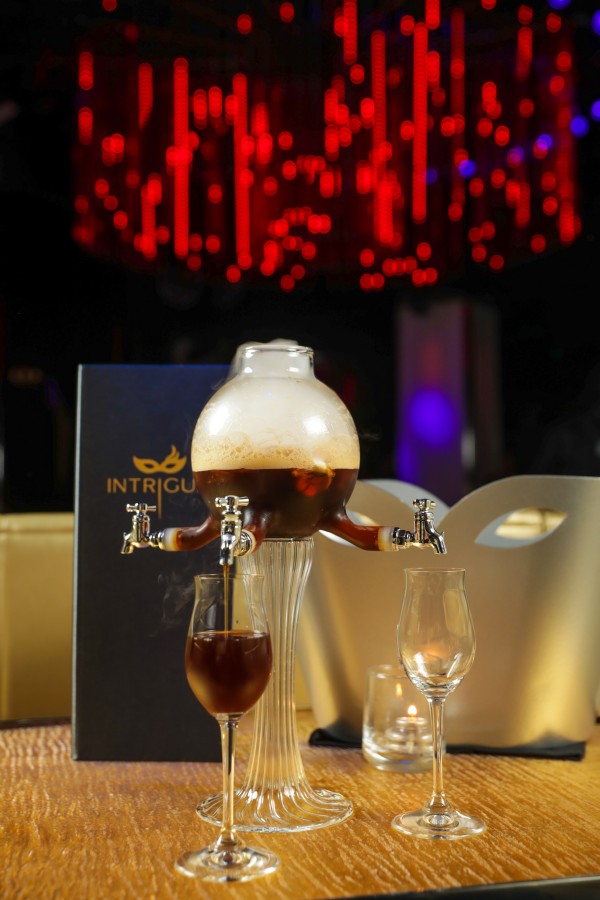 I have a friend who loooves espresso martinis. She adores the drink’s aroma and the way it blurs the line between bitter and sweet. If the night is young and the itinerary long, it’s her go-to cocktail, guaranteed (to paraphrase the drink’s apocryphal genesis) to both wake you up and mess you up.

Of course, in the origin story, hard-partying model Kate Moss doesn’t say “mess.” But Moss’ brash request must have inspired the late, great London barman Dick Bradsell. He whipped up what he called the Vodka Espresso: vodka, simple syrup, Kahlúa and Tia Maria coffee liqueurs, and freshly pulled espresso. That was in the early ’80s; the ’90s would see that drink mislabeled (along with nearly everything else of its time) a “martini.” No matter the name, the drink stuck.

Now, the Irish, Italians and even the Swedish will subtly remind you that coffee has long been a vehicle for spirits. (Ever had a proper Irish coffee or a caffè corretto? Life-changing.) But spiked coffee arguably hit the modern mainstream biggest in Bradsell’s hands. “What he did was bring espresso into the cocktail glass and create a drink that has outsold and outlived virtually all other drinks loosely named ‘martini,’” says London-based spirits historian, author and Sipsmith master distiller Jared Brown.

It is to Bradsell—as well as to an Italian, Southern Wine & Spirits’ Francesco Lafranconi—that we owe thanks for the most beautiful cocktail presentation on the opening menu at Intrigue nightclub in Wynn.

Order the Up All Night ($295) and what you’ll get is an absinthe fountain filled with nitrogen-charged house-made cold brew concentrate, Cruzan Single Barrel Rum, Disaronno and Liquor 43 liqueurs, mint and lime syrup and JetChill dry ice. Serving six, this bold, boozy cocktail strikes a perfect balance between bitter and sweet, and is more complex than a vodka-based espresso martini. An evolved Moss would approve.

“On a Friday stroll through Soho, London, where the drink was born, I dropped into five bars,” Brown says. “At each, the bartenders were hard-shaking espresso martinis. I finished at the last bar Dick ran, The Pink Chihuahua. There, a woman squeezed past me, leaving the bar with two as I arrived. I counted another dozen served before I left. The significance of this drink is that this scene is repeated every Saturday night—not just in his former bar, not just in his former neighborhood, but in bars around the world.”

Even in Las Vegas.

The post Intrigue Nightclub Whips Up Coffee With a Kick appeared first on Vegas Seven.