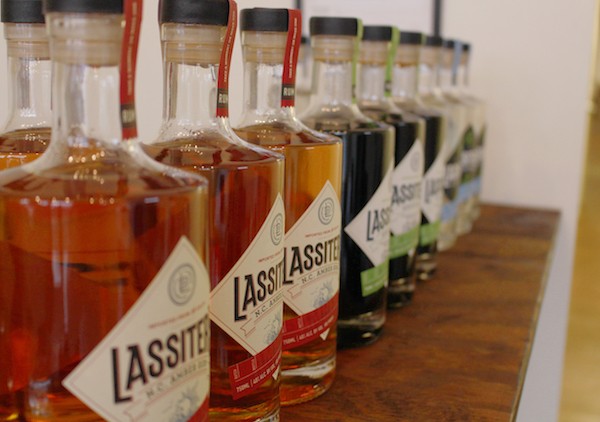 Coffee and a short glass of a complex brown spirit. Rum maybe? Maybe a cigar, somewhere along the way.

Combinations of coffee and liquor are ubiquitous, and they vary somewhere between drinkable and just south of rancid.

Most are made with a base of grain-neutral spirits, which are mostly tasteless and produced in a converted oil refinery. Yum!

Gentry Lassiter of Lassiter Distilling Co. in Knightdale, North Carolina, had another idea. He and his wife, Rebecca, are equal partners in the business.

He already produces a fine North Carolina rum, as well as a rum he gently rests in a barrel.

Let’s try something else, he thought. A combination of two beloved beverages, typically bookended at either end of a long day of work or play.

“This is an awesome product,” he said from his distillery on a rainy Monday morning in the Triangle. “We found that people who like craft spirits often like good coffee, too. We've seen some coffee liqueurs, and we've seen some coffee-flavored bourbon-type stuff.

“Personally, I think that if two plant materials grow in similar climates, they have a tendency to go together. Rum and coffee go really nicely together, but there aren't a lot of products that combine the two. So, we spent a lot of time evaluating how we can go about getting this. Getting away from a liqueur, which has its place at the bar. But it's a completely different product than what we're putting out."

Lassiter got together with Joe Bland of Raleigh Coffee Co., which sources the beans and roasts them.

“So, it's not an off-the-shelf kind of coffee,” Lassiter said. “We spent a long time going through and selecting which one paired best with our rum.”

Lassiter macerates about 35 pounds of coffee beans for about 24 hours. He uses 10-gallon filters — which are about two feet wide — and painstakingly strains the concoction, resulting in a smooth and rich 80-proof rum, essentially a cold-brew with rum instead of water."

"We found that bartenders are looking for something that has a very interesting ability to add that coffee flavor without diluting their cocktails,” Lassiter said. “We thought, what better way to do it than blending two similar climates for growing two different ... crops and putting something that's very unique, that doesn't dilute drinks the way liqueurs would do?”

"It yields a very rich coffee flavor,” he said. “You still get the rum back there, but you get a lot of these really interesting coffee notes.”

With a hint of molasses from the award-winning rum.

But getting that true coffee flavor wasn’t so easy, he said.

“We went through about 15 different recipes and different techniques to make it. We tried the one where you do cold-brew coffee and use that as your dilution agent. It tasted good, but it wasn't immediately evident that we were doing a coffee-flavored rum. People couldn't pick it up."

"This way, as you can see, it's a very dark color. It just looks like a cup of coffee."

Shake all ingredients in a cocktail shaker until chilled. Strain into an old fashioned glass with ice and serve.