Life On Bars: Collectif 1806 Touches Down in Las Vegas 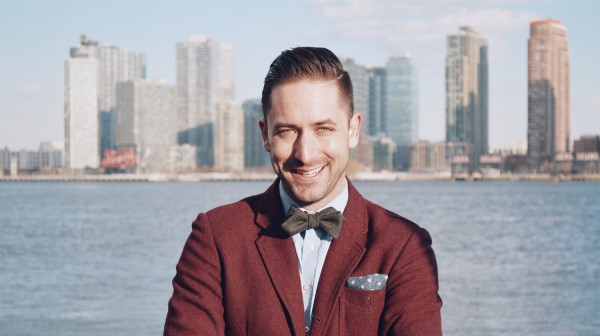 Collectif 1806’s Kyle Ford manned a two-day mission to Las Vegas, testing the atmosphere for signs of mixology—here’s what he found.

And with that, pretty much everyone who came in contact with Collectif 1806 manager Kyle Ford during his two-day visit in December can let out a sigh of relief. Rémy Cointreau USA’s New York-based ambassador of cool was dispatched by the international spirits company to find out if Las Vegas is a true enough mixology powerhouse to join the ranks of the Collectif, a coalition of cities that enjoys detailed attention and support from the parent company’s brands. Ford’s sojourn would bring him to the doorsteps of the city’s hotels and beverage corporations as well as to its bastions of craft-cocktail culture to understand how the Collectif might support them.

Now, boosters and barflies will scoff, “As if there was any doubt that Vegas has a bar culture—a damned good one, too!” We’ve endured our share of doubt. There was the whole “Quaint” business in 2014, and then February’s “Overrate-Gate,” a hand dealt to us by Thrillist not once, but twice in as many years. And don’t even get us started on Las Vegas resident Jon Taffer. But questions needed answering, or Ford’s surface mission would not have been deemed necessary in order for the Collectif to bring Las Vegas into the fold.

And so, for two days in early December, Ford made the rounds looking for signs of life in our bars. His shepherd for the duration was Rémy Cointreau’s key account manager for Nevada, Tore Kragerud, who assembled a formidable itinerary. On Day One, Ford took meetings and sampled cocktails at Whiskey Down in MGM Grand; Franklin in the Delano; Bound and Giada in the Cromwell; Heritage Steakhouse and Parlor Lounge in The Mirage; visited Back Bar USA; and capped it off with a well-earned dram of Octomore Scotch at Carbone in Aria.

The night before, Ford hit Downtown’s Commonwealth and then had a steak dinner and martinis at Oscar’s with the Collectif’s San Francisco ambassador, Nathan Burdette.

Day Two began with a Negroni and tour of the Academy at Southern Wine & Spirits, which Ford called, “The most state-of-the-art bar training facility that I have ever seen; a truly impressive resource unique to Las Vegas.” Next came the Cosmopolitan for stops at China Poblano, Chandelier, Vesper, Marquee’s Library (“One of the cooler private spaces I’ve seen”) and Lavo Casino Club before heading back Downtown for a Corpse Reviver No. 2 at Oak & Ivy, an Old Fashioned with Mount Gay Black Barrel and barrel-aged bitters at Atomic Liquors and Ford’s all-time favorite cocktail—a Botanist Gin martini with a lemon twist—at Velveteen Rabbit (“Bliss”).

The final stop on Ford’s whirlwind tour de bars took him to the industry clubhouse, a.k.a. Herbs & Rye, which did not disappoint. “I had heard so much about this place, and as soon as I walked in, I spotted a friend of mine from San Francisco, Kinson Lau, behind the bar. I must admit, its strip-mall location sets a different expectation. But once I walked through the doors, I knew I was somewhere special. Kinson immediately made me a Botanist martini, without me even asking. Time was short, as I had a red-eye [flight] to catch back to Manhattan, but I wish I could have stayed longer.”

So why should the Valley’s bar community care about attracting Collectif 1806? For one, Las Vegas bartenders have an insatiable thirst for knowledge. With myriad educational opportunities afforded them by the United States Bartenders’ Guild, the local bartenders’ union and distributors such as Southern Wine & Spirits and Breakthru Beverage, they show up in droves to learn about spirit categories, specific brands and pick up new techniques. Being that the Collectif was founded on a pillar of education, there’s a natural affinity between the two. “We view ourselves as a collective to bring together like-minded individuals to restore bartending to an art form,” Ford says. “If someone wants education, they should have access to it.”

The way Ford tells it, Collectif 1806 began as a book club of sorts. Two years ago, Rémy Cointreau acquired and digitized a massive cocktail book library with titles spanning from the time of Jerry Thomas (1860s) to the 1970s to highlight the part each tome has played in beverage history. Early events wrapped around that collection, such as a showcase of five cocktails from five books from different eras. “It didn’t make sense to sit on something like this without showing it,” Ford says. In its second year, the Collectif added cocktail hours, spirit seminars, pairing dinners, health and wellness events and even a spin class and self-defense class.

Since its inception, the Collectif and the collection have appeared at events in New York, Chicago, San Francisco, Los Angeles, San Diego, Dallas, Austin, Washington, D.C., Portland, Seattle and Boston. Ford credits mainstream media, social media and the travel of the ambassadors based in seven of those cities with increasing its sphere of influence.

And, yes, he says, “We noticed that Vegas was missing.”

If you’re scanning for the verdict, you’ll find it here: “We will be looking to do something shortly after April 1.” The Collectif plans to bring to Las Vegas a pop-up bar, featuring the vintage cocktail books, and the 1806 Athenaeum, “a new traveling educational forum that will function as a bartenders’ roundtable, focusing on bar management, cocktail trends and personal and professional development,” Ford says. “We are testing it out in March in one of our existing markets and then rolling it out shortly thereafter to cities where Collectif 1806 has never been.” The subsequent step would be for Las Vegas to formally get onboard with the Collectif and be led by its own ambassador.

For his part, Ford rejects the oft-cited opinion that Las Vegas is all gimmick and no substance. “The two days I spent here, I’ve been amazed by the passion and talent. And you have to have that [when] you’re putting on a show.” The greatest takeaway from his surveying mission? Laughing, he takes beat: “Just that I probably need to come out here more often!”

The post Life On Bars: Collectif 1806 Touches Down in Las Vegas appeared first on Vegas Seven.