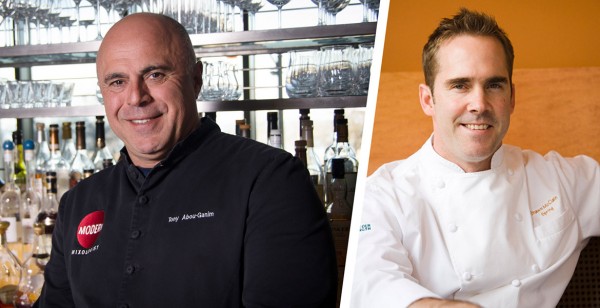 March 6 was a good day for fast hands behind the bar. But good news also travels fast. Tony Abou-Ganim, a.k.a. “The Modern Mixologist,” announced before a cheering crowd of bartenders during Speed Rack Las Vegas that he has partnered with chef Shawn McClain on a bar in Mandalay Bay, which the famed beverage consultant says will open in August.

A champion of fresh ingredients, Las Vegas-based Abou-Ganim kicked off the city's cocktail renaissance in 1998 when he opened the Bellagio with an all-fresh cocktail program as the resort’s first property mixologist. He is the author of two cocktail books, founder of the Helen David Relief Fund for bartenders affected by cancer and creator of a line of professional barware.

Chicago's Shawn McClain is the chef and managing partner of Sage and Five50 Pizza Bar in Aria, as well as Green Zebra in Chicago. In December, the James Beard Award-winning chef’s McClain Group formed a Nevada company, Libertine Social LLC, with Richard Jr. and Sarah Camarota. According to LinkedIn, Sarah is the director of innovations at Levy Restaurants, which is handling the food and beverage in the T-Mobile Arena. When the arena opens April 6, it will do so with a comprehensive beverage program by Abou-Ganim.

MGM Resorts International representatives have declined to comment, though Abou-Ganim recently said in an interview, “A libertine is someone who kind of disregards their moral compass if you will, and throws caution to the wind. The slogan ‘What happens in Vegas stays in Vegas’ could be spoken by a libertine.”

For all that Abou-Ganim has accomplished since his early days behind the bar at Mario Batali’s Po in Manhattan and later at San Francisco’s Starlight Room, or his even earlier days at his cousin Helen David’s Brass Rail Bar in Port Huron, Michigan, this will be the first bar he will call his own, and his biggest project since arriving in Las Vegas at Steve Wynn’s invitation. But it will not be the first time the world has seen a McClain/Abou-Ganim pairing. In 2012, the two went up against chef Marc Forgione and mixologist Charlotte Voisey on Iron Chef and were victorious.

Abou-Ganim may have slightly spilled the beans with his impromptu, impassioned speech, but with his next words, he more than made up for it by offering both finalists—L.A. bartender Karen Grill and Herbs & Rye’s Emily Yett, who moments later won—a job at his bar, which you might now speculate will be called Libertine Social.

*** UPDATE: MGM Resorts International reps have responded, saying they "can’t confirm the opening date as it hasn’t been solidified yet but, yes, this is true." ***