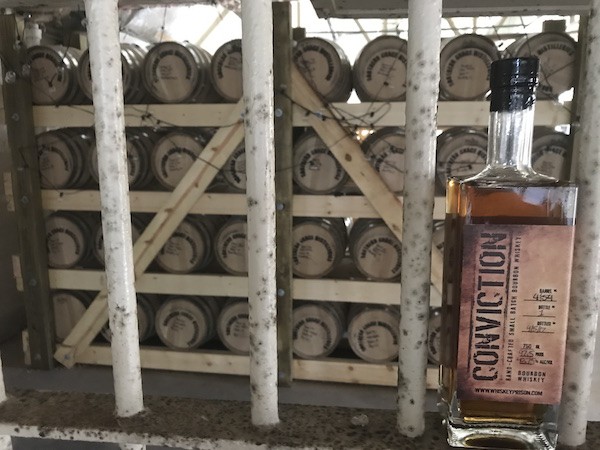 I met Leanne Powell at an old, beat-up prison, on a sweltering North Carolina summer day in 2016.

We toured the worn facility, which dates to the late 1920s and housed prisoners until 2011, when, holding fewer than 200 inmates, it closed for good.

Dank and dismal. And, on this day, almost unbearably hot.

She didn’t stop smiling as she pointed out the many buildings and her plans for them. Stills here, cookers there. Stacks of oak barrels, filled with aging bourbon, here and there.

It was honestly hard to imagine. The distillery had been housed in a 2,200-square-foot space, part of a historic textile mill in nearby Concord.

“They showed us this, and we fell in love,” she told me then as I worked on my book, “Still and Barrel: Craft Spirits in the Old North State.”

The former Cabarrus County Correctional Center —which includes 19 structures comprising 36,332 square feet, according to a posting by the state — encompasses 22.5 acres.

“We thought it was perfect,” Powell told me.

That’s maybe a bit hyperbolic. But just a bit.

Soon after settling into the old prison, now neat, tidy and welcoming, Southern Grace began distilling and barreling its bourbon, composed of 88 percent corn and 12 percent barley. As Powell envisioned, the distillers filled and stacked the new oak barrels — more than 200 of them — to rest and mature as a steady wave of heavy metal and rock music blared in the background.

Southern Grace will officially release the very-small-batch-cask-strength bourbon, which it calls Conviction, at 5 p.m. on Nov. 2.

Powell offered me a sample from one of the first bottlings, which came in at 102.5 proof, and I will be eternally grateful.

The whiskey was in the barrel for eight months, so it can’t be called “straight” bourbon, yet it’s remarkably smooth and complex. The nose reveals ripe cherries and a comforting hint of cinnamon, bringing to mind warm apples covered in brown sugar. A sip offers hints of honey and just a touch of oak. The barley brings a soft sweetness, much like an Irish whisky, especially after adding a drop of water. Soft vanilla and bright orange linger on the palate.

"Our goal was to make a good, cask-strength, small-batch bourbon that was wholly made and aged in our distillery in North Carolina,” Powell told me this week. “We made a pledge when we started Southern Grace Distilleries in 2014 that we would never bottle something we wouldn't be proud to serve to our family and friends on our own back porch. I believe we have stayed true to our guiding principle. We hope it is enjoyed on many a back porch.”

This is already a fine whiskey, and more time in the clink will only make it better.

“I'm very proud of our team,” distiller Sebastian Correa says. “We have worked hard to make a traditional bourbon in a unique setting. A prison may not be a traditional barrel house, but I believe we are seeing how well-suited this prison is for aging bourbon. We look forward to tasting what comes out of our barrels a year from now as our straight bourbon is ready to go to market.”

Southern Grace, about 20 minutes northeast of Charlotte, encourages tours — which begin in the charming “prison” chapel — and regularly schedules weekend events, including music and food trucks. Check out the “after-dark” tours. Southern Grace spirits are available in North and South Carolina and Washington, D.C. Check the website to schedule tours or to learn how to order online.