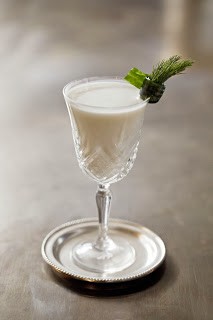 The drink above is currently my favourite cocktail and is one of two I will be drinking on Repeal Day soon. More details of this drink below but first a few words about prohibition and repeal. These are topics that have been very interesting for me since I was responsible for selling alcohol in some Middle East countries 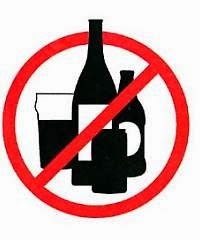 where it was officially banned, and I was also able to observe the effects of prohibition in some States in India. I was living in Delhi at the time and was responsible for selling alcohol (but not absinthe) throughout India. The neighbouring State to Delhi was "dry," meaning alcohol was banned there. We sold a lot to the shops near the border (mm .. where did it all go?!) and had no sales or marketing costs in the dry State, making it very profitable for us. The ban on alcohol in the dry State merely served to whet the appetite of potential customers there.

The long prohibition of absinthe in the USA had a similar effect with many American consumers finding ways to order absinthe online before the ban was finally lifted. Prohibition didn't/doesn't work and merely served/serves to make the banned drinks more intriguing for some.

Indeed the prohibition of absinthe in Switzerland merely drove the whole category underground and is responsible for the birth of some once notorious but now famous absinthe brands such as La Clandestine. 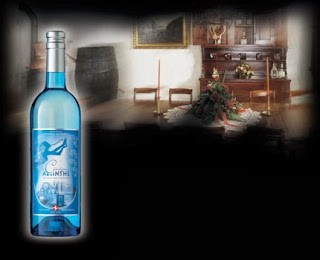 The full story of the birth of La Clandestine in the dark days of the Swiss absinthe ban can be read here.

When it comes to prohibition and repeal, absinthe has the longest history of being banned and is the subject of the most recent repeals. Absinthe was effectively banned in the USA from 1912, 8 years before prohibition. Repeal, whose 80th anniversary is celebrated on December 5, 1933, did not extend to absinthe for another 73 years. Until March 5, 2007, or another 26,753 days to be precise!

So while the US celebrates the 80th anniversary of repeal, absinthe lovers must either mourn all those lost "green hours," or must make up for lost time. I prefer the latter!

So I want to celebrate two events: repeal in general and then the repeal of the absinthe ban. I'll do so with a classic cocktail from the 1920's and 1930's and then with a modern cocktail.

Firstly, what better way to make up for lost time than by trying one (or more) of the absinthe cocktails created to celebrate prohibition and enjoyed in bars like London's Savoy around 1930 while Americans, in theory, were not allowed to drink out in their own country.

The Savoy Cocktail Book mischievously lists a selection of "COCKTAILS SUITABLE FOR A PROHIBITION COUNTRY" which are "for those countries where they make the most of prohibition." This list includes

This is not well reviewed in the Savoy Stomp ("The name is pretty accurate"), so I gave it a miss.

Prohibition started in 1920 so it seems fair to assume that these next two cocktails were expressly named to mark prohibition:

Given the number of gin, vermouth and absinthe cocktails in the Savoy and the fact that the first of the these two contains just a dash of absinthe, I have focused here on the second. It is also similar to the Absinthe Special Cocktail with the main difference being the soda. I thought it would be interesting to see what the soda brings to the drink.

I made the Nineteen-Twenty Pick-Me-Up using Gloag's Gin (no longer available) from the makers of The Famous Grouse and an absinthe that was directly hit by the US ban on absinthe: Butterfly Absinthe (more of this later). 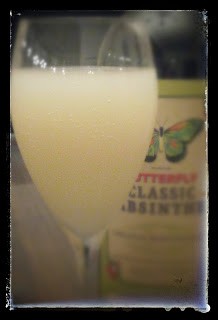 This 1920 Pick-Me-Up was strong and refreshing (maybe an unusual combination) and the citrus notes in Butterfly worked well with the gin. This style of cocktail maybe doesn't have the immediate appeal of some modern cocktails but when I close my eyes and sip it, it does indeed feel like the kind of cocktail one could easily have enjoyed at the Savoy in 1930.

The original makers of Butterfly, P. Dempsey of Merrimac Street, Boston, were of course directly affected by prohibition. Patrick Dempsey's son, George, was the Chairman of the Executive Committee of the National Wholesale Liquor Dealers Association of America (try putting that on a business card) and he presented this paper in 1908. 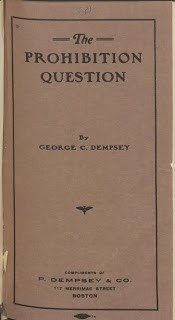 Sadly the efforts of George Dempsey and others were unsuccessful: his absinthe, Butterfly, the only American absinthe for which a bottle and recipe survive, disappeared after 1912 and his distillery closed in 1920 to become, eventually, a car park (a very profitable business in Boston!).

Butterfly Absinthe returned to the USA in autumn 2013 and is now made in Switzerland by a former moonshiner. UK mixologists have had a head start on Butterfly, with some great cocktails already created at the Worship Street Whistling Shop and at One Leicester Street. But the most interesting cocktail I have enjoyed with Butterfly takes me back to India (where this post started). London's Indian restaurant, Gymkhana, which opened in September 2013 to some stunning reviews, offers a Flutterby Lassi (created for them by Fluid Movement's Jon Lister who also created the absinthe cocktails enjoyed here in 2012). A lassi is an Indian drink (usually non-alcoholic) with a yoghurt base that is consumed at the end of a meal to ease digestion.

The Flutterby Lassi is offered as a digestif and is made as follows:-

Muddle the dill and cucumber and pour all the other ingredients into shaker.

Serve in a port wine glass and garnish with a scrolled skin of cucumber and a sprig of dill.

The Flutterby made it onto national British TV, into the Evening Standard's list of London's best cocktails and into several other national newspapers. City AM called the Flutterby a "cultural gem."

The combination of Butterfly (which I consider a digestif-style absinthe) with yoghurt works amazingly well, and the dill and cucumber topped it off perfectly. A great well-balanced taste, refreshing with a smooth creamy mouth-feel (but not at all like a cream liqueur). Despite having a large measure of absinthe in, this is the first absinthe cocktail that my wife has really liked, and even requested again and again (see below). 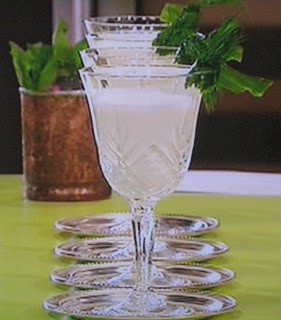 Great to see a wonderful absinthe cocktail coming from an Indian restaurant of all places. India has some of the strictest alcohol laws in the world, including prohibition in many areas. Butterfly was created by an American company that fought prohibition and lost, and is now made by a Swiss company that was started as a direct result of and response to prohibition. So in every respect, the Flutterby Lassi is a very appropriate way to celebrate the 80th anniversary of repeal in the USA. Cheers! Santé! अच्छी सेहत!