Put Down The Hard Seltzer: 7 New American Whiskeys To Drink This Summer

I know, I know, summer is the time for gin-and-tonics, for ice-cold daiquiris, for Aperol spritzes, for rosé all day, for hard seltzer.. I love them. I drink them. (OK, I'll admit I'm not a fan of hard seltzer.) But just because it's sweltering outside and the humidity makes it feel like I'm walking through a haze of split pea soup doesn't mean I don't still get the hankering for something amber, something grain-based, something, dare I say, room temperature (though a single ice cube or splash of water is acceptable as well).

I'm talking whiskey, people. Obviously there's no bad time to drink it. but in the heat of the summer, it seems like fewer people think about drinking it. Well, I'm here to fix that, by describing in what I hope is mouthwatering detail a few of my favorite newish whiskeys of American descent. Why 'Murica? I don't know. Maybe I'm still feeling patriotic after July 4th. Maybe it's just a coincidence. All I know is that I find myself drinking and loving these bourbons, ryes, Tennessee whiskies and blends on a regular basis even though we're well into sweat-trickling-down-your-back season. These whiskeys may not cool you off — well, not if you drink them neat, anyway — but drink enough of them and you may forget it's so hot out. Just be sure to hydrate and pair plenty of refreshing cold water with your booze. 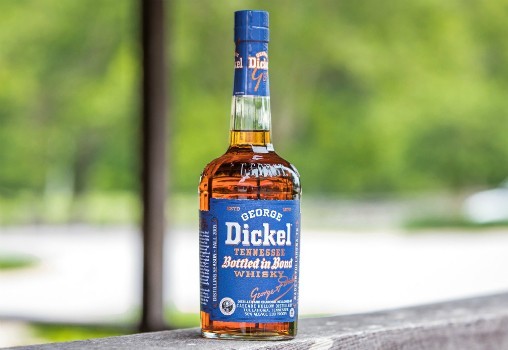 GEORGE DICKEL BOTTLED-IN-BOND TENNESSEE WHISKY (aged 13 years, 50% ABV, $36). Bottled-in-bond is a technical description: it means the booze in the bottle has been distilled at a single distillery within a single six-month "season"; it's aged at least four years in a "bonded" federal warehouse; and it's bottled at no less than 100 proof. That's the kind of thing you had to do in 1897, when bottled-in-bond became an official designation, to avoid getting adulterated whiskey. Over the years, B-in-B whiskeys sank to bottom-shelf status, but they're having a moment again — and prices are, accordingly, on the rise. Which is why it's such a shock to see DIckel's new bonded expression priced so low. And it's not just a standard 4 year old B-in-B, it's 13 years old, for cryin' out loud. It's got the characteristics you'd expect from a teenaged whiskey— burnt caramel, peppery spice, a slight dark chocolate bitterness — without being overly tannic, and a lovely, long finish that'll make him go "Ahhhhhh...." It's the perfect gift to bring to a barbecue when you want the host to think you spent the big bucks, but be sure to buy one for yourself, too. 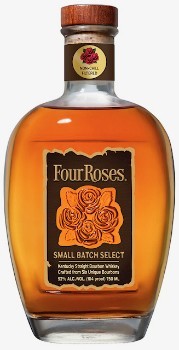 FOUR ROSES SMALL BATCH SELECT BOURBON (aged 6-7 years, 52% ABV, $60). Four Roses does limited edition small batch and single barrel releases every year, but they haven't had an addition to their core range since the bygone days of the George W. Bush administration. So Small Batch Select, released to coincide with the $55 million, years-in-the-making expansion of their distillery, is a pretty big deal. Four Roses is famous for its five mashbills and two yeast strains, yielding ten different recipes which can be combined in myriad ways. Small Batch Select, which is non-chill filtered and the highest ABV of the bunch, is a blend of six of those recipes, and distiller Brent Elliott chose them wisely. It's distinct from Four Roses' standard Small Batch bottling — richer, spicier, a little deeper in the dark chocolate and caramel notes. In short, a worthy addition to the fold, and a great accompaniment to hot dogs in the backyard or long summer sunsets. 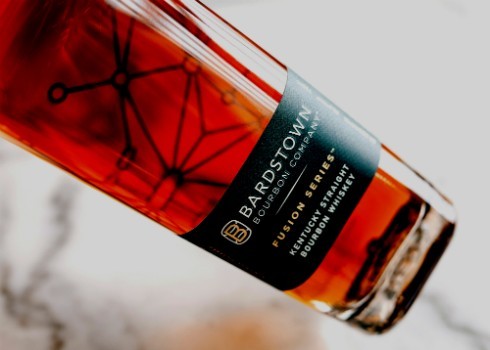 BARDSTOWN BOURBON CO. FUSION SERIES #1 (aged 2-11 years, 49.45% ABV, $60).. Even for Kentucky, where it seems like a new bourbon distillery is opening about every twelve minutes, Bardstown is a big deal. A state-of-the-art complex employing veterans of damn near every major bourbon brand, it opened in 2015 and is already making the mashbills for a bunch of brands including Jefferson's and High West. Bardstown hasn't been around long enough to bottle its own whiskey... until now. Fusion Series #1 is 60% two-year-old, in-house hooch, a combination of a wheated bourbon and a high-rye job, blended with sourced 11-year-old bourbon. This is expertly blended and well made, running just a wee bit hot on the finish but otherwise tasting every bit like a mature bourbon. Sweet round fruitiness on the front of the tongue gives way to caramel and peppery char with a pleasant, lingering finish. A good sipper that's also nifty in an Old Fashioned or Manhattan. 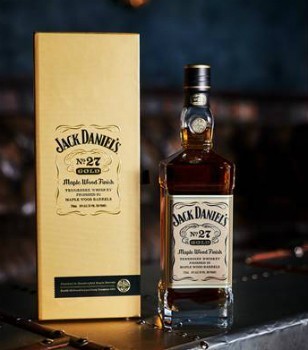 JACK DANIEL'S NO. 27 GOLD TENNESSEE WHISKY (no age statement; 40% ABV, $100). Jack Daniel's will always be known for its signature Old No. 7 expression, but even if you're not a fan — and I, to be honest, am not — there are plenty of other expressions that will float even the most curmudgeonly whiskeyphile's boat, from Sinatra Select to Single Barrel Rye to the hard-to-find Tennessee Tasters experimental bottlings. The latest addition to the fold, No. 27 is essentially Old No. 7 that's been finished in maple wood barrels and then filtered (or as they call it, "charcoal mellowed") a second time, hence the name. The finish really comes through in the final product, with the maple sweetness playing off drier, more tannic wood notes. My only quibble is that it should be bottled at a higher proof — to my palate, it lacks a bit of "oomph." Regardless, JD fans (and there are plenty of them out there, otherwise it wouldn't be the best selling American whiskey in the world) will find a lot to love here. 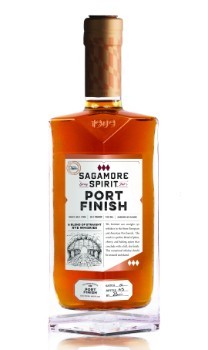 Rye: bold, dry, spicy. Right? Well, not always. Maryland rye — the dominant style of rye for much of the 19th century — is softer and fruitier than the WhistlePig-type stuff most modern rye drinkers are accustomed to. The last of the original Maryland rye distilleries shut its doors decades ago, but the Maryland style has slowly crept back into the rye conversation over the past few years. Sagamore Spirits isn't made in Maryland (although they've started distilling there), but their sourced rye is definitely in the idiom, full and fruity with the spice present but dialed down. And for this limited edition, they've finished it in port wine barrels, adding a dimension of rich, deep plum and cherry. The result is a whiskey that's almost a Manhattan in a bottle, a sipper that pairs perfectly with a cigar or a steak. Or, in the best of all worlds, a steak followed by a cigar. 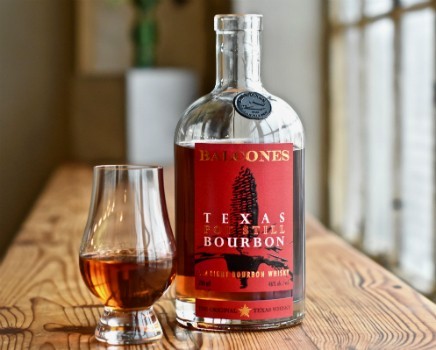 BALCONES TEXAS POT STILL BOURBON (aged at least 2 years, 46% ABV, $30). Yeah, I get suspicious when I see a whiskey that's the age of a toddler who may or may not yet be potty-trained. But in this case, there are two legit reasons to not stick it in the naughty corner and give it a time-out to rest in wood a while longer. First is that a barrel of whiskey aged in Waco, TX ages faster than one aged in Kentucky or Tennessee — that nice deep copper color doesn't look like an immature whiskey, does it? And second, it's Balcones! If you've had some of their other whiskeys, like Rumble or True Blue, you know that these folks know what they're doing. So leave your preconceptions at the door, belly up to the bar, and enjoy this tasty four-grain (corn, wheat, rye, barley) bourbon, with notes of dark chocolate, vanilla, a hint of cornbread, and enough wood on the finish to dry things out without the heat you'd expect from such a young bourbon. Worth the space on your shelf and the loot in your wallet — the affordable price is another selling point. 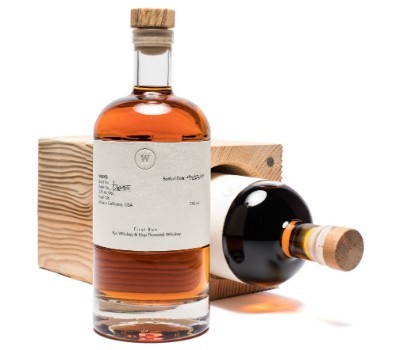 WOLVES WHISKEY FIRST RUN (aged 5-8 years, 53% ABV, $150). From George Clooney's Casamigos to Stephen Soderbergh's Singani 63, there's no shortage of celebs attaching their names to booze brands. I'm actually not quite sure who Jon Buscemi and James Bond (no, not THAT James Bond) are, but according to the press release, in addition to being famous for something or other they're also "culture mavericks" and "iconoclasts." It's enough to set off major alarm bells in my head. But check out the distiller they signed on to actually make the whiskey — Marko Karakasevic, the legend behind the brilliant Charbay brand, one of the very first of the modern craft distilleries, and still one of the best. So Buscemi and Bond either knew what they were doing or got superlative advice. The blend consists of a spicy rye and two whiskeys distilled from finished, tap-ready beer, — a stout aged in French oak, and a Pilsner aged in new American oak. And let me tell you something, this stuff is terrific. The sweetness of the French oak (which I assume held cognac at some point, hence all those fruity notes) and the spice of the rye are balanced out by a subtle dry bitterness from the beers. At 106 proof, it's a powerful sipper. A little water brings up the beer influence a bit, but I like the bite that comes with drinking it unadulterated. (Oh, and if you want to find one of the 900 or so bottles available, it's exclusively online at Reserve Bar and Flaviar).