Rob RIggle Is Ready For Some (College) Football (Playoffs) 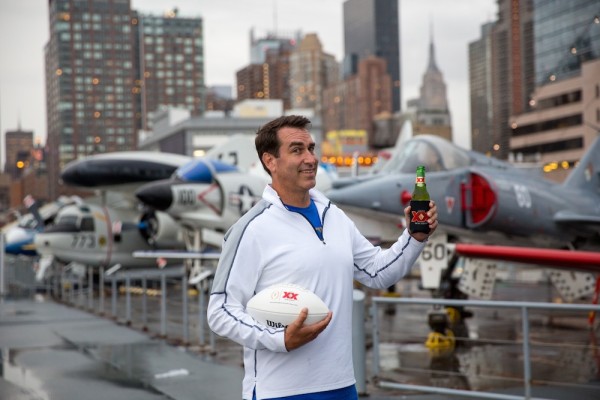 True sports fans, from all walks of life, live and die with the wins and losses of their team. Even a celebrity like actor/comedian Rob Riggle isn't immune to the agony of defeat when it comes to his beloved University of Kansas Jayhawks who went 1-11 this college football season.

Fortunately, this season wasn't all bad for Riggle, who teamed with Dos Equis, the Official Beer Sponsor of the College Football Playoff, for their "The Most Interesting Fan of College Football" campaign. We recently caught up with the Louisville native, who's also taken a turn as The Colonel (yes, that Colonel), to talk about his team, college football fans, tailgating and more.

This was a rough season for your beloved Jayhawks. How did you cope?

Through prayer and Dos Equis. I will admit, it was tough to watch, but you don’t just stop being a fan because of a couple of tough seasons. You gotta be with them for the good times and the bad, and these are just dark days, but there will be brighter days ahead.

On a more positive note, this season you also made your debut as Dos Equis’ Most Interesting Fan spokesperson. What’s that experience been like?

It’s been a lot of fun! People come up to me at least once a day telling me how much they love the commercials. So I’ve been very grateful and happy to be partnering with them. I’m glad people are enjoying them and I’m happy to see people got on board to submit entries for The Most Interesting Fan Search.

Of all the fans you’ve seen this season, which has been the most interesting for you?

They’re all so great – I heard they received thousands of entries. I would say one of the most interesting ones was the guy who replicated his favorite team’s field in his front yard, down to the goal post! But they’re all incredible because you see the most outrageous homemade gameday outfits!

Now tell me about an interesting fan of yours?

I once was in a Funny or Die video called “Designated Driver,” where I was in a doughnut shop and knocked someone out. After I knocked them out, I said the line “doughnut mind if I do.” And one fan actually got the line tattooed on his body with a picture of a doughnut and showed me. 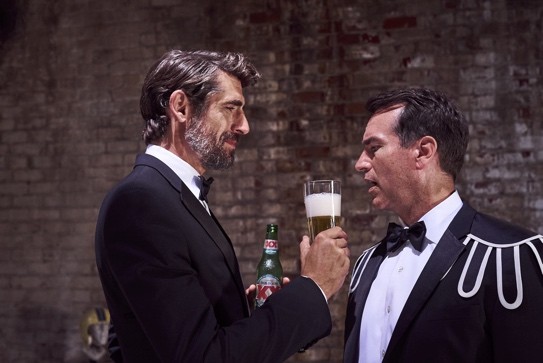 Good music, fun people, great food, and of course, Dos Equis beer! A fun group is key – no grouches allowed. BBQ is what sets it off and of course some ice cold Dos Equis. You also need to have at least a minimum of one to two hours to pregame before you walk in the stadium. A beautiful day also helps, sweatshirt weather — ideally 50 degrees.

Every football has their go-to tailgate food. What’s yours?

BBQ is a must, preferably burnt ends. Chicken, ribs, and BBQ are good but you can’t forget the burnt ends. Also, sides on sides on sides. I love some mac & cheese, coleslaw, beans, fries, and mashed potatoes. But BBQ is generally the theme.

Where do you prefer to watch college games?

If the weather is great and atmosphere is fun I like to watch KU at KU. It’s a beautiful campus, beautiful stadium, people are great and it’s easy to get around. If not there, then definitely in my house in front of my big screen TV.

Finally, what are your predictions for the College Football Playoffs

I can’t pick a winner, really no one can. Anyone who tells you they can is faking it. But I went to a Big 12 school and Oklahoma is a Big 12 school. They are representing our conference so I’m going to root for them this year.