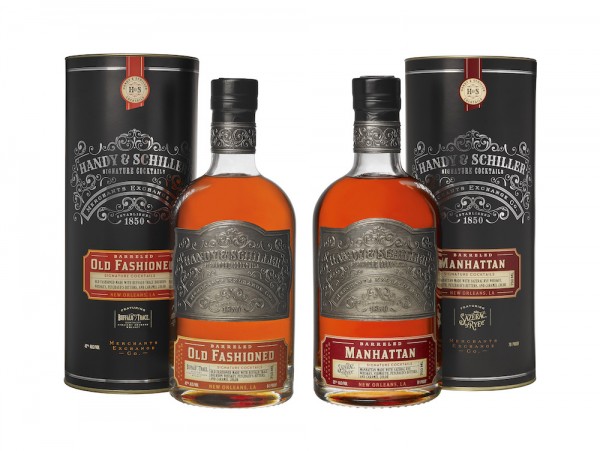 The Sazerac Company pays homage to the origins of American cocktailing with their recently introduced Handy & Schiller Barreled Cocktails. Named for Thomas Handy and John Schiller, two men who had a great impact on the culture in New Orleans.

In the late 1800s, NYC bartender Schiller found his way to New Orleans and began operating the French Quarter's world-famous Sazerac Coffeehouse. Handy, a Maryland native , worked for Schiller at the Sazerac and later went on to establish his own importing and wholesale liquor business. Together, these two men played a role in the early days of cocktail-making that helped set the standard and inspiration going forward.

Wheatley describes the Old Fashioned as having “the perfect balance of sweetness and oak influence. The finish is a hint of creamy citrus fruit with a nice bourbon character overall.” Wheatley described the Manhattan as “a well-balanced cocktail with the perfect amount of rye and spice. A nice finish of fruit with subtle sweetness.”

Fittingly, Handy & Schiller Barreled Cocktails launched in New Orleans and will spread to other select markets by late next year. Each signature cocktail will come in a 750ml bottle in a sleek matching canister and will be available beginning in October for $39.99.