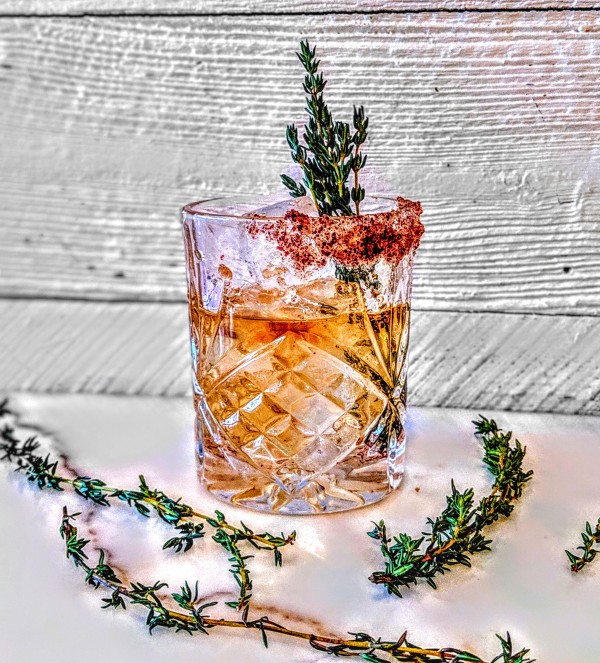 The Silk Road was an international network of trade routes connecting the East and The West. From Asia to Africa to Europe it provided a vast trade network of mostly land but also also maritime trading routes. My Silk Road Old Fashioned incorporates some of the flavors and tradition from this ancient journey. Goods from Central Asia made their way to Japan on the Silk Road. To represent Japan in my Old Fashioned I use Kikori Japanese Whiskey. Kikori Is a rice whiskey which is made of 100 percent Japanese locally grown rice . Aged in American Oak, French Limousin and Sherry Casks, It's a bit floral, A bit vanilla and a whole lot of delicious!

Spices were a big part of the trade of The Silk Road. Sugar was as well. An Old Fashioned has sugar so I decided to combine brown sugar and sumac . They give a richness and depth to the cocktail. Sumac grows in many areas of East Asia, The Middle East and Africa.

When choosing the bitters for my Old fashioned and sticking with my Silk Road theme I chose 18:21 Tart Cherry and Saffron Bitters. Saffron Is one of the most precious spices in the world . It was traded by merchants traveling the Silk Road routes. A bit spicy, a bit bitter and a bit floral. A perfect combination for my cocktail. Tart Cherry brings a bright ,refreshing finish.I half rim the glass with a mixture of sumac and brown sugar then add a spritz of rosewater and a sprig of thyme.It creates a delicious aroma when you lift the glass . It also looks beautiful. Where does the Silk Road end? Where does it begin? Have a Silk Road Old Fashioned and imagine the glorious journey! Cheers!!!

I love to create delicious ,flavorful cocktails and travel the world! Educating along the way!