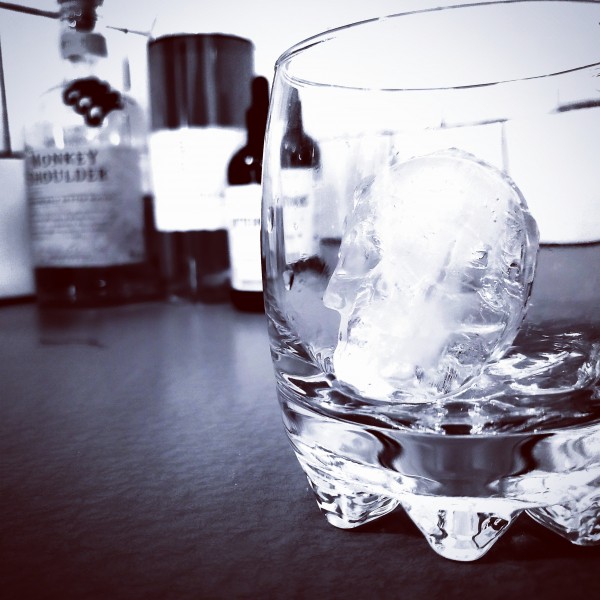 My brother Michael, for all of his unreadable stoicism, has a knack for giving Christmas gifts with staying power. So when he gave me a set of skull-shaped ice molds this last holiday season, I was pretty sure they’d be conscripted into duty eventually.

Not that I really needed ice molds – as a longtime cocktail enthusiast, my freezer is well stocked with cube molds large and small, including a set of Buffalo Trace-branded ones with protruding buffalo images on one side. But ice in the actual shape of skulls – that was a fresh addition to the collection. And since I had also given Michael a skull-shaped shot glass at the same Christmas exchange, it turned out to be a heady coincidence. I let them the ice molds sit until the right idea took hold.

I’m nine years older than Michael, who we called changuito– Spanish for “little monkey” – when he was little for his boundless, off-the-wall energy, cheery smile and his love for Curious George, the famous cartoon monkey. (No doubt he would be mortified to know I was sharing this fact.) He and I were also both into monster movies and science fiction, and I remember taking him to see Star Wars for the first time when it was re-released for the premiere of The Empire Strikes Back. That was on my mind when I recently realized that I had never actually gotten around to seeing Kong: Skull Island, the lauded 2017 semi-reboot of the classic giant gorilla franchise.

Inspired, I searched for it in my Netflix and Amazon Primate – I mean, Prime – libraries, but the cheapskate in me was put off by the rental price when there were so many free movies awaiting in my watch queue. I picked one of those for the time being, but still let the inspiration ride: If I couldn’t actually watch Skull Island, I figured, I would come up with a drink using one of those skull ice cubes instead.

My Skull Island cocktail is basically a tropical Old Fashioned, packed with nods to the whole Kong vibe – gorillas, jungles, exotic islands. Naturally, I built it on Monkey Shoulder blended malt Scotch – not just for its fruity, buttery notes but its malt brawn, which would go toe-to-toe with the tropical sweetness that would come: First, a roar of banana liqueur, then a dash of tiki bitters. And finally, I poured the whole mixture over that toothsome skull ice cube... which offered one last creepy grin before tilting wayward in the Scotchy surf. 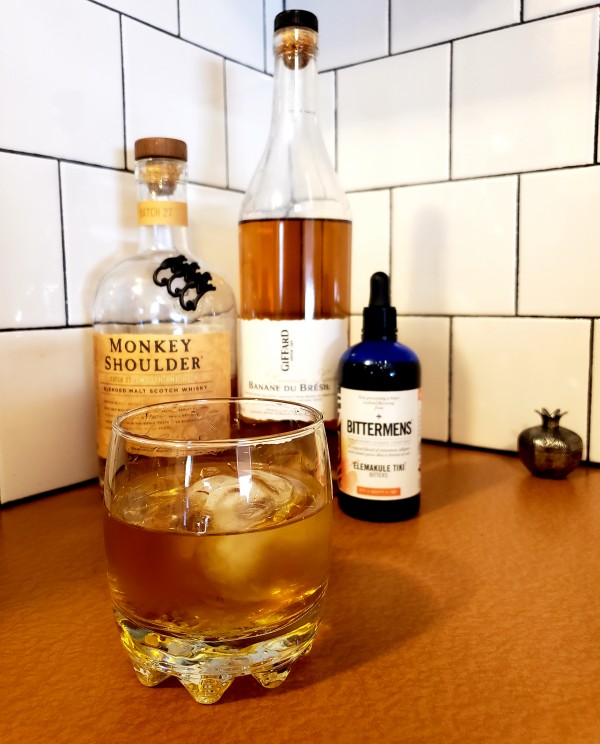 While I haven’t yet gotten around to seeing that movie, here's a drink in the meantime that, while deliciously tropical sweet, will still put hair on your chest.

Combine ingredients in a mixing glass, add ice and stir. Pour into an Old Fashioned or short rocks glass over one large ice cube, ideally one shaped like a skull. Sip and periodically pound chest.

Marc Ramirez is the base spirit of Barmoire.com, a blog about craft-cocktail culture in Texas and beyond. His motto is: When life hands you lemons, make Aviations.