Suntory Whisky Celebrates Its Roots with The Yamazaki Mizunara 2017 Edition 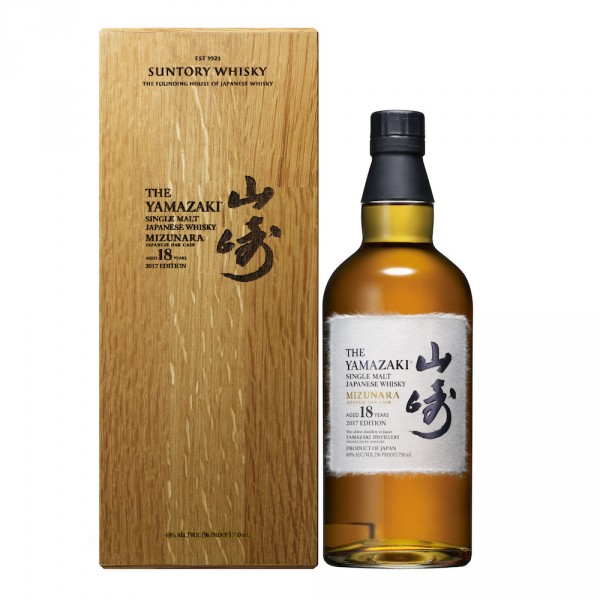 No matter where you like your whiskey from -- Scotland, America or Ireland -- the quality and craftsmanship put into the spirit is what's important. Suntory Whisky, the founding house of Japanese Whisky, know that all too well. That's why they use a rare Japanese oak to craft their latest release, The Yamazaki Mizunara 2017 Edition.

Named for the wood from which its casks are made out of, the Mizunara cask is an expression of "Tsukuriwake" – the art of diversity in whisky making. Diverse grain types, as well as fermentation, distillation and maturation techniques, underpin Suntory's art of blending.

Suntory's fourth Chief Blender Shinji Fukuyo tasted a few hundred Mizunara whiskies and made selections with varying ages, from 18 years old and beyond. A very small portion exceed even 50 years of maturation, which give this limited edition an incomparable depth and a flavor. "I wanted to reveal the whisky's soul that is the Art of Mizunara—a heightened sense and awakened palate engaged through aromas and flavors never known before. Encountering it should be a moment of epiphany," says Fukuyo via a statement.

It is said that in the early 1940s, Suntory's blenders began small scale experiments with Mizunara. But it wasn't until the end of World War II, when it became difficult to import wood, that Suntory truly focused on mastering the homegrown Mizunara cask. Although only found in a few regions within Japan, it was the hard, permeable nature of the wood that made it difficult. The name "Mizunara" comes from the tree's high moisture content – in Japanese "mizu" means water and "nara" means oak. Its permeable character is less than ideal for cask making since liquid can easily seep through the wood. And because Mizunara is a hardwood, it can be difficult to shape and join with the precision needed to prevent leaks.

Through perseverance, Suntory's craftsmen mastered the art of Mizunara cask-making by learning how to identify the right trees to make perfectly true casks. Although rarer, Suntory's cask makers found that straight grain trees are less permeable. Trees suitable for cask making must have grown perfectly straight and have a diameter of at least 27.5 inches. They also tend to be far older than trees used in other casks. In keeping with Suntory's deep respect for the environment, trees are only cut if their removal will not jeopardize the health of the forest.

Mizunara's bottle label is 100% handcrafted mulberry Echizen paper produced via a slow process of drying on wood boards (a traditional Japanese method). The wood box that encloses the bottle is made of cask material used in the aging of Suntory whisky.

The Yamazaki Mizunara 2017 Edition will available next month at a suggested retail price of $1,000.00.