The Family Coppola Gets Into The Booze Business

DrinkWire is Liquor.com’s showcase for the best articles, recipes and reviews from the web’s top writers and bloggers. In this post, Rashaun Hall offers insight into the new Coppola line of spirits. 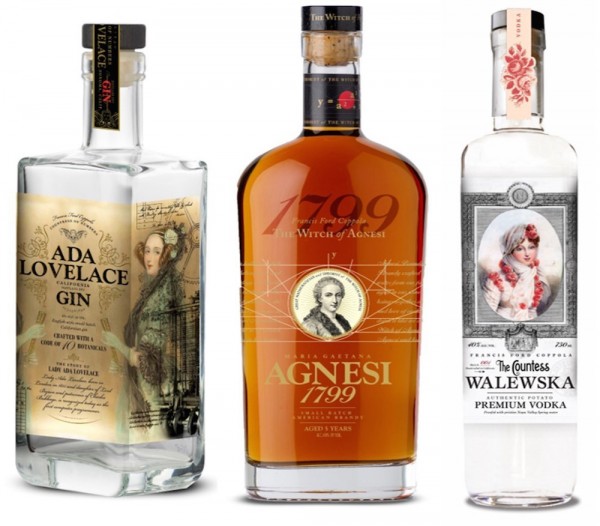 Having conquered the worlds of film and wine, the Coppola family is now getting into the spirits game.

The Family Coppola recently announced the launch of Great Women Spirits: small-batch, house-crafted, classically styled spirits. Released this month, they began production with a vodka, a gin, and a brandy.

Being in a family comprised of three accomplished female filmmakers (Eleanor, Sofia, and Gia), Francis Ford Coppola wanted to pay homage to powerful women. "My mother, sister, wife, daughter, and granddaughters have all inspired me, as have all of the incredible women we celebrate with Great Women Spirits," Coppola said via a statement. "We all know well the great men of history, Alexander the Great, Julius Caesar, Napoleon and so on. I can think of as many women who distinguished themselves at that level in the fields of politics, science, mathematics and philosophy, so my choices and reasons for this collection are very personal."

"You know why we don't hear about famous women in history?" Eleanor Coppola adds. "Because the history books were written by men."

The artisanal spirits are proofed with spring water from Coppola's historic Inglenook property in Napa Valley—water naturally filtered through lava rock at the base of an ancient, now inactive volcano that adds character to each spirit. Additionally, a selection of botanicals and grapes from The Family Coppola's properties enhance the distinctive flavor profiles.

The Family Coppola has a long history of making strides in areas involving gender equality, from business to sports. The winery's wholesale operations are run by a woman, Wendy Putman, who's been in the role for 10 years. Last year, in an effort to promote the recruitment, development, and advancement of women in baseball, The Family Coppola's Virginia Dare Winery joined with the management of the Sonoma Stompers and recruited the best female baseball players for the team, a partnership the winery plans to continue.