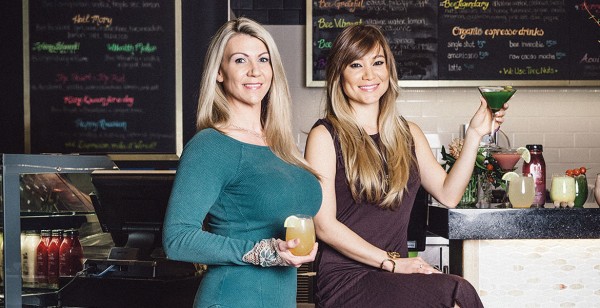 "If you’re going to be bad, be really good at it.” That’s the bottom line for Marcella Williams and her business partner, Jamie Stephenson, founders and co-owners of the Juice Standard (JuiceStandard.com). The pair opened their cold-pressed juice concept’s third location on Leap Day, February 29, in the Cosmopolitan, but their new kiosk on the second floor between All Saints and Holsteins has something their two neighborhood juiceries don’t: a liquor license.

If you’re gobsmacked at the thought of someone defiling your greens juice with vodka, try to remember where you are and then think of it as more like someone putting the freshest, healthiest mixers available into your cocktail.

“We’ve always believed in a healthy balance,” Williams says. “I mean, this is Las Vegas. For me, [creating this menu] was like going back to Day 1, when we got to create a bunch of juices. I was inspired and excited to create new recipes, but with alcohol.” In addition to the nine cocktails, Williams and Stephenson have also launched a brand-new juice blend in honor of the property: Bee Cosmopolitan combines alkaline water, detoxifying bentonite clay, lemon, agave and beet juice. Order the Sex Panther and have it mixed with vodka, triple sec and lemon for a Cosmo that is both the cause and the cure.

The rest of the cocktails ($14) follow a similar pattern: a base of one of the Juice Standard’s seven organic, cold-pressed juice blends or four nut milks, a healthy dose of spirits and a dash of other modifiers that bring the drink close to something you may have had before. Bloody Mary fans will love the Hail Mary, which pairs the greens-packed Bee Resilient with gin, Worcestershire sauce, horseradish, lemon, salt and Tabasco. Dudes will happily abide by the Happy Russian, which brings together Bee Happy nut milk with vodka, Kahlua and optional crème de menthe, peppermint oil or a shot of espresso. Being relatively low-calorie and easy to mix, vodka plays into five of the drinks; the rest of the menu raids the liquor cabinet for bourbon (Queen For a Day), tequila (Spice of Life) and rum (Living Legend).

Before they were juice mavens, Williams and Stephenson had their own very personal juice journeys. Williams, the company’s COO and a mother of three children under 10, including twins, says she quickly became adept at sneaking healthy foods into her kids’ meals. Smoothies were the gateway to juice, crammed with spinach, avocados, kale and other good-for-you goodies. “I found that if I put just enough beet in, it would turn pink and they would suck it down,” she says.

Stephenson, the company’s CEO, witnessed her stepfather’s own transformation first-hand when he was diagnosed with Stage 4 colon cancer and given seven months to live. Her mother cleaned out the pantry and stocked only fresh, healthy foods and produce for the family. “Five years later, we were all sitting around with Walter on his birthday. Food did that,” she says. “Nutrition really helps heal the body. We’re just here to spread the juice.”

A former portrait photographer, Stephenson loved her career, but dreaded the act of selling her work. “I knew a long time ago that I was meant to do something meaningful, but here I am now, finally realizing that what I’m really good at—and what I find very easy to sell—is something I really believe in.”

With three stores now open in less than two years, preparation is already under way for the Juice Standard to make that four. “We plan to open a production facility in which we will make all of our juices, and bottle and label them like we currently do, but in a much bigger space,” Stephenson says. “We’ll also create a kitchen for kale chips, salads, chia puddings. We’d like to get into kombucha, kimchi and all kinds of really great, healthy, yummy, grab-and-go foods.” Plans call for the facility and its small storefront to open by the end of the year.

Want to get your juice fix when it’s freshest? Deliveries to the Cosmopolitan location are made daily right before the kiosk opens at 7 a.m., and again between 10 a.m. and noon—and the cocktails are available the entire time.

“I live here, and I believe in health,” Stephenson says. “Of course I believe in consuming lots of plants, but I was raised with a pretty good understanding of what it is to live a good life, to try a bit of everything. Life is a buffet.”

The Juice Standard isn’t the only juicery in town to get its liquor license.

SkinnyFats owner Reed Allen Slobusky has been sitting on his own liquor license at his Warm Springs and Durango Boulevard location since 2015, but will finally put the wheels in motion for the much-delayed late-April opening of ColdPress Express next door, combining liquor with the company’s cold-pressed juices and house-made nut milks. Says Slobusky, “We will be considerably expanding our original Dean Martin Drive location later this year, and will roll out liquor there once completed.” The North Decatur location will soon follow suit, Slobusky says, as will other yet-to-be-announced locations coming later in the year.

The first ColdPress Express location will feature 12 taps, nine of them for juice, two for nut milk and one offering Mothership cold brew coffee. “The customer experience will be unlike anything in existence as visitors will be able to customize their cold-pressed juices to order, as well as to modify our recipes.”

Now about those cocktails. “Don’t walk in expecting to order a Jack and Coke,” Slobusky says. “We’re able to get very creative with the juices, as well as the 50-plus add-on ingredients in the juice shop. In general, if you can get it somewhere else we probably won't serve it.” Juice and spiked juice shots will be served super-cold thanks to a Jet Chill machine, which converts CO2 into dry ice, as well as via juice cubes.

As for how Slobusky reconciles the healthful, detoxifying benefits of juice with the intoxicating nature of alcohol, he says, “SkinnyFats has always been about celebrating choice, and will continue to give our customers as many options under one roof as we can. At the end of the day, it's about two people or a group of friends wanting different things to eat or drink, but being able to enjoy the same restaurant.”

Are you a frequent flyer at SkinnyFats? Join the new $3 Juice Club to enjoy 10 12-ounce juices each month for $30 as well as discounts on meal-prep items in the grab-and-go fridge. A limited number of $3 Juice Club memberships will be released each time a new ColdPress Express location opens.