DrinkWire is Liquor.com’s showcase for the best articles, recipes and reviews from the web’s top writers and bloggers. In this post, Rebecca Agocs offers insight into drinking around the world. 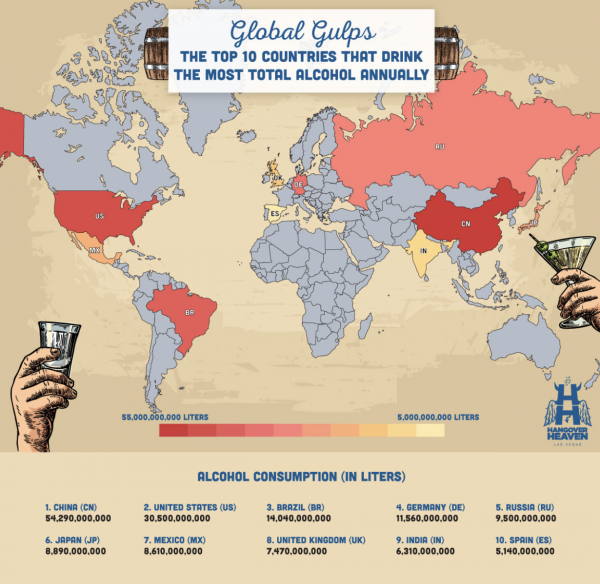 Beer and booze make a recipe for a good time regardless of your location, but your vacation destination can impact said good time. If you and your cohorts are big drinkers, why not find a holiday destination where you can experience life like the locals — including their favorite drinks to imbibe at the best local watering holes?

If you're heading abroad this year, consider one of these top 10 destinations, ranked based on locals' yearly consumption of beer and liquor in this new study by Hangover Heaven.

Okay… perhaps the data looks ridiculous here because of the population of China. It is a large country with a lot of people spanning a lot of ground, meaning that it makes sense the amount of alcohol the Chinese are slinging back annually, ultimately, should be high.

And if you’re in China for business, know that it is perfectly normal to find yourself nearing drunk at dinner. In fact, it’s expected. Imagine your sobriety is a measure of your host’s hospitality, and you’ve got the right idea.

If you’re visiting China, you should be drinking: Baijiu

While the liquor laws of the land might be pretty serious, the United States is a well known destination for liquor lovers all over. It might not be the same type of destination as Germany who shows up later on this list, but the United States still has a lot to offer in terms of types of liquor, variety of locations and local culture that influences them.

If you’re in the US, you should be drinking: Margaritas

It happens once a year and when it does, Carnival brings over a million tourists to Brazil. That being said, the tide of tourists makes a lot of sense. Who wouldn’t want to visit a beautiful and vibrant South American country for what’s considered the best Carnival in the world?

If you’re visiting Brazil, you should be drinking: Caipirinha

Not to mention you can drink in public. In fact, you probably should. There’s something called casual drinking in Germany.

Over the years, Germany has actually gone up in these rankings as one of the countries with the heaviest alcohol consumption per capita and by liter.

If you’re in Germany, you should be drinking: Beer

This likely comes as no surprise because Russia is widely known for her vodka and her countrymen’s love for it. Local culture encourages celebration which, of course, includes alcoholic beverages of some sort. And don’t worry - you and the local couple you met and drank with last night won’t remember your strange argument about political matters. It’s a common and fairly casual occurence to forget the evenings events in the morning.

Public intoxication is perfectly legal and the drinking age is 20. There isn’t a lot more to explain about why Japan is a great destination for your inner liquor lover. In all actuality, Japan is a great destination for beer lovers too. Sports lovers often drink drink beer, especially in the major cities, and it’s a popular beverage for delivering toasts.

Craft breweries and microbreweries have been on the rise for the last 20 years or so. Not to mention that Asia is the top region for beer lovers based on beer consumption per capita in the region.

If you’re in Japan, you should be drinking: Beer

There are a variety of popular party destinations in Mexico. Maybe that’s because it’s located so close to the United States and travel to the central American country is easy. Maybe it’s because Mexico is home to the best Tequila. Ever.

If you’re visiting Mexico, you should be drinking: Domestic Mexican beers and Tequila cocktails

An important part of British culture, drinking is introduced fairly early on in life. Impromptu drinking is more or less encouraged, so if you’re one to enjoy a pint with breakfast, this could be the destination for you.

If you’re in the U.K., you should be drinking: a Gin and Tonic

The alcohol culture of India has roots all the way back in 3,000 B.C. With highly potent and intoxicating drinks, people looking to expand their palette should head to India with careful planning to make sure they avoid dry states and recognize religious regions that don’t drink out of respect for the religions there such as Islam and Hinduism among others.

If you’re visiting India, you should be drinking: Palm wine and local beer

LIke many other countries on this list that have an established drinking culture, drinking in Spain is a bit of an artform. If not an art, then at least an acquired skill. Drinking in Spain is a marathon whereas it’s a bit of a sprint in the United States. Known for leisure and love of celebrating, Spaniards have a fairly strict “Drinking schedule” that will enable you to enjoy your experience like a local.

If you’re in Spain, you should be drinking: Vermouth cocktails

All About the Angel Shot
Drinking in the Sky: All About Consuming Alcohol in the Air
Celebrating National Drinking Straw Day: Eco-Friendly Straws For Your Bar Cart
Amarula Cream Liqueur Gives Back