To friendship: Laphroaig's Cairdeas Fino Cask a must get 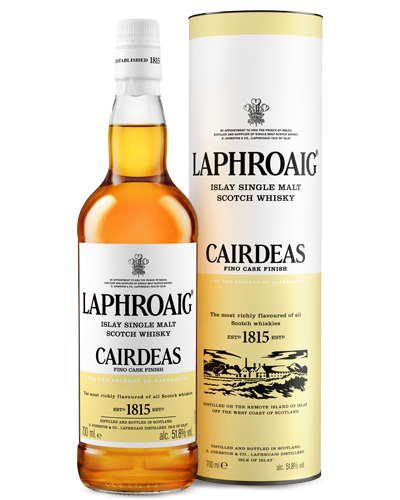 Hate me if you will, but I don’t mind.

It’s quite OK to be a little jealous. I don’t blame you.

Thing is, I have a bottle of Laphroaig Cairdeas Fino Cask, which may be the best “whisky” I’ve tasted, and this is wholly without bias, even though I was given a bottle.

It is, so far, anyway, the best “finished” whisky I’ve had the privilege of tipping. The whisky starts in warehouses eight and 10, in bourbon barrels, and is finished in the fino casks.

“Released in limited quantities stateside as one of the most a highly anticipated Laphroaig offerings each year, the 2018 iteration, Cairdeas Fino Cask, features notes of toasted almonds, dried fruit and sea salt, all of which perfectly complement the whisky’s peaty, unmistakably Laphroaig flavor.”

This delicious express clocks in at 103.6 proof, with a nose of toasted almonds and honey. It has a refined sweetness out front with a nice yet subdued smokiness. Laphroaig’s signature peat, though, is unmistakable. The Cairdeas Fino Cask runs about $80 in the U.S., which is a virtual bargain when considering many sourced whiskies cost that much or more.