Travel the World of Whiskey at Sir Henri Penthouse Rooftop

What if you could get a flight to Scotland, Ireland, Japan and Texas for $40? Now you can take your taste buds on that trip around the world of whiskey at Sir Henri Penthouse Rooftop with their new Flight Around the World. 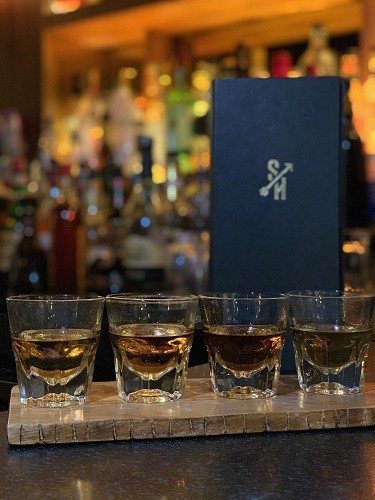 Sir Henri has curated a global selection of four whiskeys made in destinations known for their expertise to compare side by side. The Flight Around The World will be offered all season long and includes the following:

Balcones Texas Corn Whiskey: The first Texas whiskey on the market since Prohibition, Baby Blue is crafted from roasted heirloom blue corn. This rich and oily maize adds new sophistication to the corn whiskey tradition while keeping the freshness and verve of classic American distilling.

Jameson Irish Whiskey: Hugely popular Irish blend, renowned for its affinity with ginger ale. The default springboard into the fascinating world of Irish whiskey is smooth and sweet with woody and nutty tones.

Suntory Toki Japanese Whiskey: Toki is a blended whiskey from Suntory’s three distilleries: Yamazaki, Hakushu, and Chita. This is a round and sweet blend with a refreshing citrus character and a spicy finish.

Lagavulin Islay Single Malt Scotch Whisky: The connoisseur’s choice when it comes to Islay whiskey, with Lagavulin 16 Year Old hailed as one of the finest whiskeys available. Rich, smoky and elegant.

About Sir Henri Penthouse Rooftop: Located atop the Hotel Henri – a contemporary, boutique hotel with a rustic and urban flair, Sir Henri Penthouse Rooftop is mere footsteps away from three of New York City’s most dynamic districts – Chelsea, Flatiron and Gramercy. Sir Henri is open year-round and serves as the perfect sanctuary to escape the whirlwind weather of New York City. Pairing the soul of a Jazz Age speakeasy with a modern appreciation for mixology, Sir Henri is rewriting the rules on cocktailing with a global influence. An intimate penthouse bar with a lush, theatrical mix of cozy nooks, low lighting, and stunning NYC skyline views, Sir Henri serves up every sip 18 stories above the streets of Manhattan.