DrinkWire is Liquor.com’s showcase for the best articles, recipes and reviews from the web’s top writers and bloggers. In this post, EZ Drinking offers insight into the new tax bill. 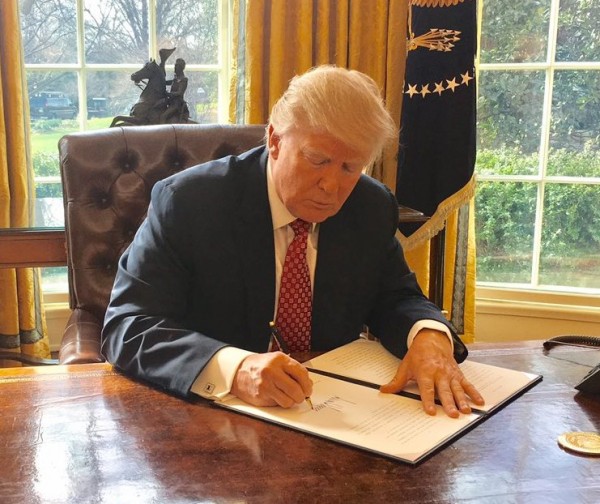 On Friday, December 22, 2017 President Trump signed the $1.5 trillion tax bill also know as "H.R.1 - An Act to provide for reconciliation pursuant to titles II and V of the concurrent resolution on the budget for fiscal year 2018." Tucked into this massive tax bill was an amendment that reduced the federal excise tax (FET) on distilled spirits but, only for 2018 and 2019. Sometime around December 14th the Senate added an amendment to the tax bill that proposed changing this single FET to a graduated tax. Before 2018, when a distillery sold distilled spirits to a distributor or a state liquor agency, the distillery paid the US Treasury an excise tax of $13.50 for every proof gallon (a PG is one gallon of spirit at 50% ABV).

However, starting January 1, 2018 the FET for distilled spirits is now broken down into 3 brackets.

Federal Excise Tax for Distilled Spirits. Graph created by EZdrinking. Not to scale.

Bracket 1: $2.70/PG for the first 100,000 PG; Bracket 2: $13.34/PG up to 22,130,000 PG sold; Bracket 3: $13.50/PG for anything above that. This graduated tax was most recently proposed in the "Craft Beverage Modernization and Tax Reform Act of 2017" as a means to provide small distillers with a tax break and bring the FET for distilled spirits in line with the discounts that small breweries and small wineries receive. But for some reason, when the Senate added the FET reform to the tax bill, it stipulated that the tax reduction would only last though 2019. Though, according to Mark Shilling, a distilling consultant and current president of the American Craft Spirits Association, it is likely to be reauthorized at the end of 2019. At the end of each year Congress reauthorizes a number of tax laws that are set to expire such as the cover-over subsidy which benefits rum distillers in Puerto Rico and the US Virgin Islands. That being said, Shilling stated that distillers will need to reach out to their representatives in Fall 2019 to stress the importance of reauthorizing the new FET structure.

The other interesting question about the FETs for distilled spirits is what its economic impact will be. We will not know for certain until next year at the earliest however, we can make an estimate. According to TTB in 2016, all Distilled Spirits Producers (DSPs) generated about $4.185 billion in revenue for the US Treasury. If we apply the new FET system to the TTBs data of average taxable removals in proof gallons, the Treasury would have received $4.088 billion, a difference of $97 million or 2.34%. This is minuscule in relation to the overall Federal budget.

About half of the savings will go to DSPs selling less than 100k PG which will have a significant impact on the large number of small distilleries around the country. With these savings, most small distillers have already indicated that they plan to invest the money in new equipment, and or more employees which will have ripple effects locally and nationally from new sources of income tax, payroll tax, and sales tax just to name a few.