Whisk(e)y Of The Week: What Is Friendship If Not A Cask Strength Islay Malt?

How many whiskies can one distillery churn out? It's something I wonder whenever I see a bottle of the latest Laphroaig, something that seems to happen every two weeks or so. I've seen plenty of 'em come and go. RIP, Laphroaig 15 and 18; hello, Lore and Select, the no-age-statement expressions that replaced them. There's the flagship 10 year old, of course, which they offer at 40% ABV and at cask strength (my advice: go for the cask strength). There's Triple Wood and Quarter Cask. There are regular sightings of limited edition, now-you-see-em-now-you-don't expressions like the 27 and 32 year old expressions that knocked my whisky-lovin' socks off..

And then there's the Friends of Laphroaig, also known as Cairdeas ("friendship" in Gaelic), one-shot bottlings released every summer for the Feis Ile (Islay Festival) and for thirsty drammers the world over — at least those who can get their hands on them. Begun in 2008, the Cairdeas series features interesting and unique variations on the Laphroaig theme. Some years are better than others; I adored 2013's port cask finish, while last year's Fino sherry finish left me lukewarm. 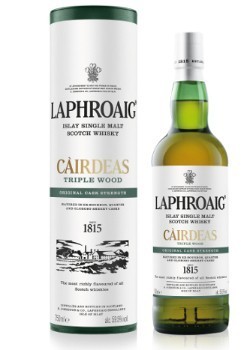 This year's edition, Laphroaig Cairdeas Triple Wood Cask Strength (no age statement; 59.5% ABV, $80), isn't exactly a risky, experimental affair. It's merely a higher-octane version of a core Laphroaig expression that was already quite good at 48% ABV. But friends shouldn't let friends drink watered-down whisky, right? And the extra alcohol turns a very good whisky into an excellent one.

The three barrels used in Triple Wood are ex-bourbon, in which the whisky spends the vast majority of its aging span; quarter casks (literally, casks about a quarter the size of typical whisky barrels, used in this case to put more whisky in contact with the wood); and Oloroso sherry casks. There's no age statement here, but judging from the color and flavor I'd guess a good chunk of it is in the neighborhood of the 10 Year Old.

I could nose this whisky all day — candied bacon cooking on a smoky campfire by the ocean, with hints of salt and seaweed and just a hint of grilled fruit. It hits the tongue sweetly, with the orange peel notes from the sherry casks leading the way, but that good ol' peaty medicinal Laphroaig flavor follows in short order, more earthy than smoky in this case. The finish is spicy but surprisingly sweet and smooth, given that the damn thing is almost 120 proof. At this point I feel obligated to say that peated Islay malts aren't for everyone, but a part of me would also want to shake anyone who doesn't like this and yell in their faces, "No, you DO like it! Say it! Say it!"

Oh, and I almost forgot to mention that all those who buy a bottle (of which there are 36,000 available this year) also get a code with which to claim a square foot of Laphroaig-owned Islay sod as their own. If that's not a friendly geature, I don't know what is. Although I don't recommend buying Cairdeas by the case in order to try to get enough land to build a tiny house or anything like that. Friendship does have its limits, after all.