We Found The Trendiest Whiskey You’ll Ever Drink

Contributed by Drinking In America on Sep 07, 2017

DrinkWire is Liquor.com’s showcase for the best articles, recipes and reviews from the web’s top writers and bloggers. In this post, Drinking In America offers a look into a whiskey distillery.

It’s hard to be an alcohol snob when you’re used to getting Franzia’s Sunset Blush Rose box wine on your way home from work every Wednesday night.

Staying on top of “a la mode” drinks and drink trends is truly a struggle that we all share, but what if we told you that there is a California Distillery that could change all of that? Spirit Works in Sanoma County, California is fermenting their whiskey with music.

That’s right, you can now say, “No big deal, just my whiskey was matured under the beautiful melodious sounds from the symphonic score of the Nutcracker.” Talk about a conversation starter.

Spirit Works calls this process the “Music Barrel Experiment.” The idea is to find out whether sound vibrations can agitate the liquid significantly enough to affect its flavor after it’s harvest. The way it works is twelve barrels are sectioned off in a separate room. Six have headphones placed along the sides of the barrel playing their very own unique, made specifically for them, playlist for about three years. The other six remain untouched as the “control barrels.” While this might seem a bit humorous (I mean, they made a playlist for a barrel…), it is just as much a serious and fascinating exploration into the power of sound waves. 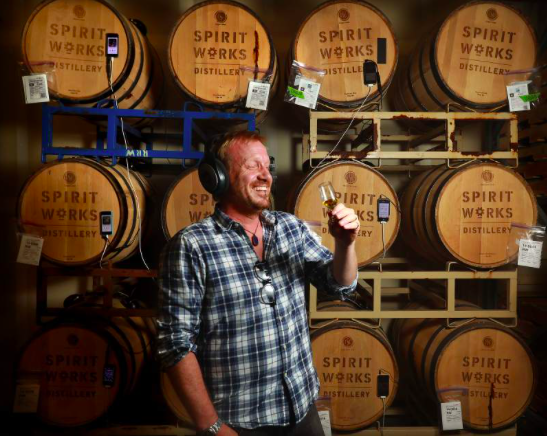 Sound waves have been proven to affect matter, but now where the staff can get creative is trying to figure out the type of impacts different frequencies have. Which asks the questions, classical or popular music? Spirit Works can’t make a case for one over the other just yet, but it’s open to trying just about everything.

They have batches listening to artists such as Prince, Michael Jackson, Daft Punk and others. Now that’s some trendy whiskey…

If you’d like to sip on some Michael-Jackson-Influenced-Whiskey, check out the following online retailers:

The post We Found The Trendiest Whiskey You’ll Ever Drink appeared first on DRINKING IN AMERICA.