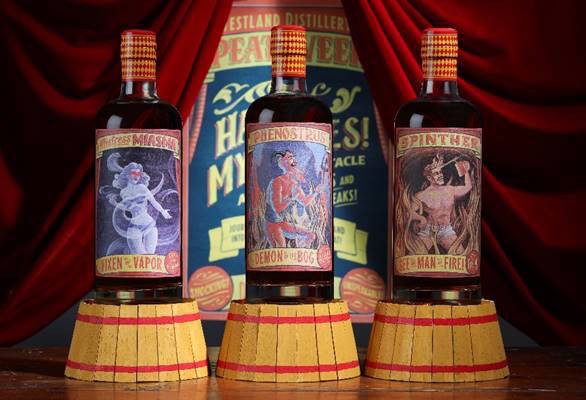 Not all whiskey drinkers are made equal. Seems like an obvious statement but when you begin to learn about the differences between Irish Whiskey and Scotch or Bourbon and Rye, you can fall into a very deep, albeit delicious barrel. For example, the more peatier the whiskey, the smokier the whiskey. Some love it, some hate it. It's clear that the good folks of Westland Distillery are in the former.

The Seattle-based distillery will celebrate its fourth annual Peat Week (October 2 through October 7) by offering three unique sideshow-themed commemorative bottles: Phenostrus, The Demon of the Bog; Mistress Miasma, The Vixen of Vapor, and Spinther, The Man of Fire.

“Similarly to last year, this release is composed entirely of Heavily Peated Distiller’s Malt from Bairds,” says master distiller Matt Hofmann via a statement. “The marrying of five new American oak casks with two ex-Bourbon casks, resulted in the perfect balance of heavy smoke lifted by the right amount of sweetness."

Only 1,500 bottles, which will each retail for $99.99, of the three will be made available nationwide, so peat fans you've been warned.