Whisk(e)y Of The Week: A Canadian Club Worthy Of The King Of Late Night

One of my favorite nighttime activities after my wife and child go to bed is watching vintage Johnny Carson-era Tonight Shows while sipping a glass of early '70s Canadian Club, from a bottle purloined a few years back from my father-in-law's liquor cabinet. Alas, I finally polished off the bottle, but just in the nick of time, here comes Canadian Club CC Chronicles 41 Year Old Canadian Whisky (45% ABV, $300),. It was also distilled in the '70s (1977, to be precise), but unlike the 6-year-old hooch I'd been quaffing while checking out Ed McMahon and Doc Severinsen, this stuff was left to rest for a four decade-plus wood nap, making it the oldest Canadian Club released in the brand's 160-year history.. 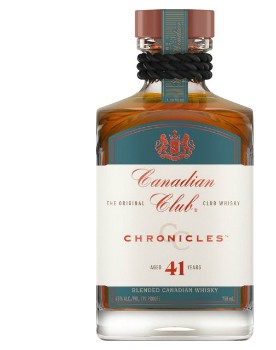 Since the days when Johnny ruled the late-night airwaves, Canadian whisky's traditionally light, smooth flavor has fallen completely out of fashion — so far, in fact, that it may be starting to come back in a self-conscious, retro kind of way. To be on the safe side, however, CC spiffied up this batch with splashes of rye, cognac and sherry to give it a little more depth. The 41 is incredibly fragrant, with a cognac-dominated, perfume-like aroma wafting from the glass so strongly I can practically see it. On the palate, it's richer and fruitier than standard Canadian Club, but the light, dry, cereal-and-oak finish is in the classic style, something Carson would no doubt recognize instantly.

There have been some amazing whiskies coming down from the Great White North in the last few years, a good chunk of them sporting a higher rye content and a bigger, more powerful flavor than the Canadian juice on which I cut my boozy teeth. I never thought I'd advocate spending $300 on Canadian Club, but this upscale update of an old-school Canadian blended whiskey is worth it. It's a welcome visit from an old friend. And it tastes as good with Jimmy Fallon on the tube as it does with Johnny.