Whisk(e)y Of The Week: A Good Excuse To Start Drinking More Irish Whiskey

I don't drink enough Irish whiskey. That's in spite of the fact that more people seem to be drinking it than ever before — in the States, at least, it's been one of the fastest growing spirits categories for several years — and that pretty much every assumption you might have had about the stuff has been upended. The classic triple-distilled, smooth-n'-easy drams from your parents' day are still around, of course, but so are big, flavorful single malts that rival anything coming out of Scotland. You can't swing a cat in Ireland without hitting a new distillery, or one that's under construction (though swinging cats is not a recommended method for finding whiskey distilleries). It's a thrilling time to be an Irish whiskey drinker. And yet... it's still so easy to overlook it and get swept away in the flood of deliciousness coming out of Scotland and Kentucky, to say nothing of Japan, Canada, India, Australia..... 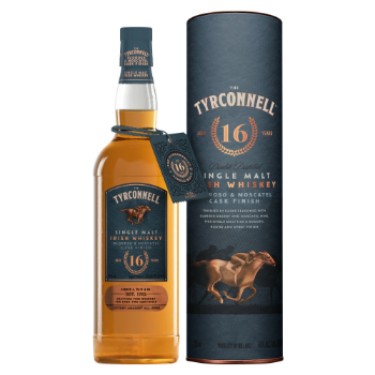 Well, I've vowed to stop taking Irish whiskey for granted, one bottle at a time, starting with this beauty, distilled at the famed Cooley distillery which also makes the very fine Kilbeggan. Tyrconnell is double distilled like a Scotch single malt (most, though certainly not all, Irish malts are thrice-distilled), making it more velvety on the tongue and imparting a fuller flavor, though it's still an elegant, restrained sipper.

Single malt snobs who go around ho-humming anything from the Emerald Isle would still do well to try the limited edition Tyrconnell 16 Year Old Oloroso & Moscatel Cask Finish (46% ABV, $100). Even if the ex-bourbon cask-aged whiskey doesn't grab you — and by all means it should — the combo Oloroso sherry and Moscatel wine finish will. The sherry's dry saline and orange-grapefruit notes come through, but the Moscatel imparts round notes of ripe grapes and juicy pear, with the whiskey's malt and oakiness underpinning the whole affair. It's a terrific combo that doesn't require ice or water. Hell, if you're in desperate enough straits it probably doesn't even need a glass, though I wouldn't recommend hoovering it directly from the bottle.

It's too soon to say if I'm about to go on an Irish whiskey binge, although my bottles of Redbreast and Green Spot and Powers are indeed looking more enticing as of late. I do know, however, that I'll be sticking this one in regular rotation for a while.