Whisk(e)y Of The Week: A Rye So Nice They Barreled It Twice

Knob Creek bourbon, part of Jim Beam's groundbreaking Small Batch Collection, was launched in 1992, and it wasn't until almost two decades later that a second KC expression (Single Barrel Reserve, if you're wondering) was released. Since then, however, a veritable smorgasbord of Knob Creek variations have hit the shelves, everything from a maple-infused bourbon to a $300 limited edition 14-year-old bottling. Knob Creek Rye, introduced in 2012, is probably my favorite of the bunch. It shares the same mashbill as its Beam sibling Old Overholt, which isn't officially disclosed but is known to be in the neighborhood of 51% rye, the bare minimum allowed for it to be called rye. The difference is that it's aged longer and bottled at a higher proof, which gives it a lot more "oomph," to use the scientific term. 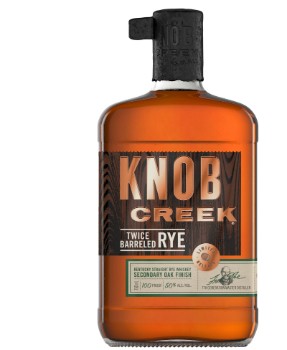 Knob Creek Twice Barreled Rye (50% ABV, $45), the latest Knob to come down the, er, creek, takes standard KC Rye, which is aged in new charred American oak barrels, and finishes it for an undisclosed length of time in another new charred American oak barrel. New charred American oak tends to impart a lot of vanilla and a lot of spice, so I was expecting a spicy, vanilla-heavy rye. Which didn't necessarily sound like a good thing. But while Twice Barreled is on the sweet side, it trends towards fruit and baking spices more than vanilla, and the spice doesn't stray into tannic territory — in fact, for 50% ABV, it's quite a gentle sipper, with no water necessary to soften it up.

The world didn't necessarily need this rye to exist, but I'm glad it's here. It makes another nice counterpart to the big, spicy ryes coming out of MGP in Indiana. And despite the fact that it's a limited edition, it's cheap enough to use in cocktails, where it really shines. Try it in an Old Fashioned if you don't believe me. As long as Beam is coming up with newbies of this quality, they're welcome to do a couple of new Knob Creek expressions a year for the duration, as far as I'm concerned