Whisk(e)y Of The Week: A Single Malt For Fans Of The Bubbly

You'd think that, at this point, every possible permutation of whisky has been dreamed up, stuck in a fancy bottle, and flogged to us by the marketing whizzes who work with the distilleries. 37 year old half-peated Lowland malt finished in second-fill ex-Tokaji barrels that were surgically implanted in the stomach of a blue whale for six months? On it! It's enough to make you feel bad for folks like Brian Kinsman, the "malt master" of Glenfiddich, who in recent years has created some delicious new expressions like their Fire & Cane rum cask-finished expression and the Experimental Cask IPA finish. There are a lot of Glenfiddichs on the market, enough so Kinsman could probably rest on his laurels for a year or two, tend to the stills, and nobody would complain. But shelf space must be occupied, whiskyphiles must be dazzled, and to be frank, folks like me need good new whiskies to write about. 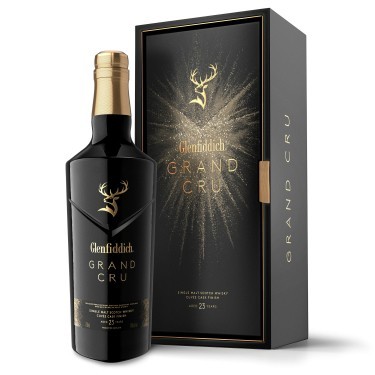 And on that last count, Kinsman has succeeded gloriously. Glenfiddich Grand Cru (aged 23 years; 40% ABV, $300) is damned tasty, and a worthy addition to Glenfiddich's permanent portfolio. In these dark days of no-age-statement single malts, it's comforting to know that Glenfiddich still has ample stocks of 20-plus year old whisky socked away for this sort of thing. The other selling point is that, after aging in American and European oak, it's finished for up to six months in French cuvée casks — the wine from which Champagne is made. You can tell just from a quick whiff, as the nose is like a concentrated, fruity glass of fine bubbly. On the palate it's sweet honey, ripe pears, and tart citrus, with a supple finish that betrays only a modest oakiness — quite the trick for a dram of this seniority.

Does the world need another pricey whisky in fancy packaging? I guess it depends on who you ask. But this one doesn't feel gratuitous, and I'm especially looking forward to pouring it on New Year's Eve as an alternative to the traditional glass of sparkling wine.