Whisk(e)y Of The Week: An Octomore That's Not (Just) About The Peat

I'm pretty sure I've said it before, but I won't sue myself for plagiarism, so here goes again — Bruichladdich is the most interesting distillery on Islay, which is the most interesting region of Scotland when it comes to making whisky. Since the venerable distillery reopened in 2000 after going dark for several years, the brand has been dedicated to screwing around with pretty much every aspect of making whisky, messing with people's preconceptions of what a single malt ought to be, and making us think about aspects of whisky-making that probably never entered our minds before. How do you make the world's peatiest whisky by an order of several magnitudes taste like anything other than a liquid ashtray? Why does a single malt have to be 10 years or older? What do you mean, a lot of the barley used in Islay malts doesn't even come from Scotland? 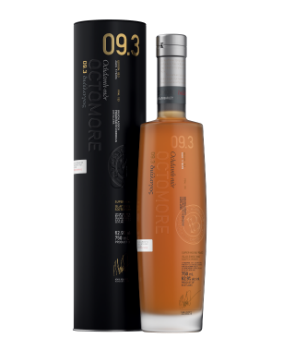 Bruichladdich, led for many years by the iconoclastic distiller Jim McEwan, and succeeded by the equally capable Adam Hannett, has created some truly mind-blowing malts under its own name, but its peated whiskies are released either under the Port Charlotte or Octomore monikers. The Octomores are the rock stars of Islay malts, experimental limited editions with over-the-top peat levels and a stunning complexity that send single malt geeks swooning and bottles disappearing faster than you can say "Irene's Field."

Irene's Field is, in fact, where the barley that makes up Octomore 9.3 (62.9% ABV, suggested retail price $230) comes from. It's notoriously difficult to grow barley on Islay, which is why most brands don't bother. But Bruichladdich doesn't just use locally grown barley, they use it, in this case at least, from one specific farm. How much of the terroir survives the distillation process? That's what they aim to find out. To further emphasize the grain, it's been aged a mere five years, mostly in second- and third-fill barrels, ostensibly to keep the wood from dominating too much. Of course, the fact that this is a heavily peated malt (133 ppm, far from the peatiest Octomore but colossal by the standards of most Islay whiskies) confuses things a bit.

All this minutiae is a lot of fun to write about, and it's a lot of fun to talk about it over a dram or several with fellow whiskyphiles. But the million dollar question, or rather the $230 question, since that's how much one of the 18,000 bottles costs, is, how does the damn thing taste? Well, if you're an Octomore nut, you may be a little disappointed, as the peat here is, compared to other editions, subdued, almost gentle. Which makes sense since it's the barley that's supposed to really shine here, and shine it does. A beautiful sweet vanilla maltiness leads the way from the tip of the tongue to the throat, with the smokiness coming through on the back of the tongue and lingering for a good long while post-swallow. Is the barley here appreciably different from that grown elsewhere on Scotland? On Islay? Is the 2011 harvest from whence this grain comes appreciably different from 2010 or 2012? I don't think I have the answers there. But I'm having a terrific time trying to figure it all out. Because, when you get down to brass tacks, this is a whisky that tastes good, in a way that's quite distinctive from most other single malts. And that's not the only part of the story by a longshot. But a good backstory has to have a good whisky to go with it to mean anything. And in this case, it's mission accomplished.