Whisk(e)y Of The Week: Honoring The Man Who Quenched America's Thirst After Prohibition

One of the most important figures in the history of American whiskey — or at least the consumption of whiskey in America — was a Russian-born Canadian named Sam Bronfman. Mister Sam, as he was known, got into the liquor distribution business in the early 1900s. When prohibition hit America and parts of Canada, he got a license to produce medicinal whisky. In 1928, correctly sensing that prohibition wouldn't last forever, he bought the Seagram's company and the rights to all the brands they made and distributed. With the arrival of Repeal in 1933, he was ready. While American distilleries took years to get a decent supply of aged bourbon and rye back in stock, Bronfman swooped in with his light, smooth Canadian whiskies, a far cry from the adulterated, potentially poisonous hooch that folks had been forced to quaff for the previous decade and change. Canadian whisky soon became the preeminent brown spirit in the States, a distinction it maintained for the rest of Bronfman's life (he died in 1971). At the time of his death, Seagram's was the largest spirits company in the world.

Tastes changed, however, and blended whiskies like Seagram's V.O. and Chivas Regal lost their luster amidst the rise of bolder, more flavorful American whiskeys and craft spirits. The Seagram's empire eventually collapsed, with many of its brands winding up in the hands of Diageo and Pernod Ricard, giant conglomerates which are kinda sorta the modern heirs to the Seagram's throne. In recent years, you could still find a bottle of Seagram's whiskey behind just about every bar, but it became harder to find people who were actually drinking it. 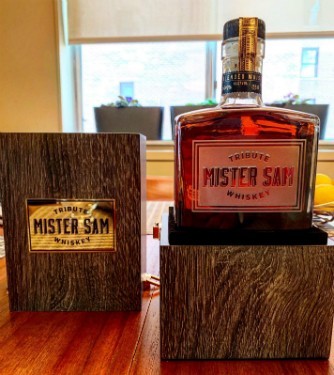 Today, Sazerac, which started distributing Seagram's brands in the 1940s, is working on rejiggering the portfolio to bring it into the post-booze renaissance 21st century. They've also made a "tribute whiskey" to the man who got the ball rolling, Sam Bronfman himself. Mister Sam Tribute Whiskey (66.9% ABV, no age statement, $250) is a blend of Canadian and American whiskeys — their mashbills and ages are left to the imagination. I must confess that neither I nor my friend to whom the bottle belonged bothered to look at the proof before we tried it. It's a Canadian blend! we thought. How strong could it be? A whopping 133.8 proof, that's how strong.. The first words out of my friend's mouth after our initial sip were, "You want some water?"

The truth is, if you're prepared for the alcoholic wallop, you don't really need water — although a little splash certainly doesn't hurt. Blends get short shrift nowadays, but making a good one is indeed an art. And Sazerac's master blender, Drew Mayville, has his artistry on full display here. Dark fruit, most noticeably plums and cherries, mingle with brown sugar, gingerbread and baking spices, along with a fair amount of oak and rye spice. The finish is long and a little hot without water, but much more palatable than the high ABV would lead you to believe. A few drops of water turn down the heat and turns up the fruity and oaky notes without diluting the flavor in the least.

Mister Sam may be a look back at a legend of the old school, but the liquid in the bottle paints a great picture of the future of both blends and Canadian whisky — they're bigger, they're bolder, and if you ask me, they're better. Would Mister Sam himself like it? That's open to debate — his dram of choice was the decidedly more mellow Seagrams V.O. with water. But I'd like to think he'd recognize and approve of the greatness on display here even if it's not his personal style. For more insight into the man and the empire he built, there's also reading material included in the spiffy-looking package — Bronfman's own (short) treatise, ... from little acorns... It makes for excellent reading material while downing a dram..