Back in September, I got to taste Woodford Reserve's upcoming Master's Collection bourbons with the guy who made them, Chris Morris. In case you're not familiar with the Master's Collection, they're one-time-only annual releases which mess around with one aspect of Woodford's traditional whiskey-making process, whether it's the yeast or the aging process or the mashbill or what have you. They tend to be hit-or-miss affairs. I still reminisce longingly about the maple cask-finished bourbon from several years ago, while the brand's attempt at a single malt can still be found gathering dust on certain store shelves. 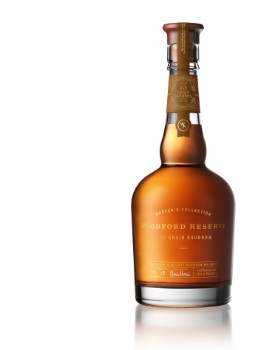 This year, Woodford found itself with a pair of one-shot bourbons ready to go, so they were both released at the same time. Select American Oak, aged in Ozark oak, was very fine, but the other one, a four-grain bourbon, blew me away. Woodford Reserve Master's Collection 2018: Oat Grain Kentucky Bourbon (45.2% ABV, $130) employs 66% corn in the mashbill, which makes it a bourbon by a comfortable margin. But rather than using wheat as its fourth grain, as is customary, this one uses oats, along with barley and a very small percentage of rye.. Irish whiskeys have been known to use oats, but Morris said, "Historically, I have not seen any Kentucky distiller refer to using oats in whiskey.." There's a reason for this — oats are a pain in the you-know-what when it comes to distillation. As Morris described it, "the oats going into our mashing process were extremely sticky [and] hard to handle, which made this a classic Master's Collection, 'Oh shit, why are we doing this, let's don't do it again.'"

The oats only comprise 18% of the mashbill, but they dominate both the nose and the palate — it's like drinking a boozy oatmeal cookie, with the oats and sweet baking spices coming to the fore. The dry oak and spice on the finish bely the whiskey's nine years in the barrel. It's distinctive and absolutely delicious, possibly my favorite bourbon of 2018.

So why did I wait so long to mention it? I have no excuse, so I'll chalk it up to a long-term brain fart. The last quarter of the year sees so many whiskeys (and whiskies) hit the market that it's easy for one to get lost in the shuffle, no matter how excellent it may be. But while Woodford's Oat Grain Bourbon is no longer being made, based on a quick Internet search it still seems to be available on plenty of store shelves. If you're anything like me, you'll want a bottle to drink and a bottle to hoard.