The story of Kentucky Peerless is the stuff of which movies are made, if more movies were made about distilleries. Founded in 1889 in Henderson, Kentucky, Peerless produced bourbon right into Prohibition — when it was sold as medicinal whiskey — and then, like so many other American distilleries, disappeared... until it was revived by founder Henry Kraver's great-grandson and great-great grandson in 2014. They were even given the same distillery license number held by the original Peerless. A most touching footnote.

But wait, there's more! They built their small distillery/visitors center just off the main drag of what is now Whiskey Row in Louisville, from scratch, with their brash, young (we're talking barely able to drink legally), inexperienced distiller, Caleb Kilburn, calling the shots the entire way. Kilburn didn't, and doesn't, cut corners. Most notably, he's one of the only distillers in Kentucky to use the sweet mash method of producing whiskey rather than the time-honored sour mash method. It's more time consuming, more complicated, and, well, more of a pain in the ass to do sweet mash, in which no spent mash from the previous distillation is used. It makes consistency more difficult to achieve from batch to batch. But Kilburn insisted, saying sweet mash makes a better distillate, and a better distillate makes a better whiskey. So sweet mash it was. 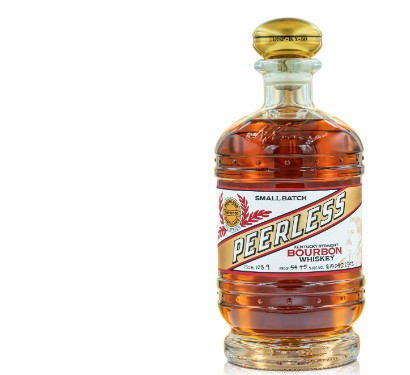 The first bottle of Peerless whiskey — a rye — was barreled in 2015 and bottled a mere two years later. And here's where the story would normally fizzle out, with the finished product not living up to the hype and the (frankly adorable) distillery becoming a tourist haven and little else. But while Peerless rye was overpriced for its tender age ($125), it was good. So good, in fact, that it vaulted into Whisky Advocate magazine's 20 Best Whiskies of 2017. And the three-year-old is an improvement on the two-year, for what it's worth.

And now comes Kentucky Peerless Straight Bourbon (54.75% ABV, $70), the product which the Taylor family, who revived the brand, has been working toward since day one, revived after 102 years. And I'm delighted and, to be honest, a little relieved to report that, whether or not it's anything like the Peerless of a century ago, it's a damn good bourbon. Aged for four years and bottled at cask strength (a relatively low 109.5 proof), it's got its share of spicy cinnamon, pepper and oak, especially on the finish. But there's also vanilla, honey, baking spices, and a slight floral vibe, enveloped in a creamy, tongue-caressing mouthfeel. Its robust flavor makes it a fine base spirit for cocktails.

Yes, you can get bourbon of equal or better quality for less money. But this is a bourbon you'll be happy to drink, and a brand you'll be happy to support. Peerless isn't the marketing tool of some big multinational corporation. It's a small, family-run operation. And by small, I mean small — they batch their whiskey six or so barrels at a time, not because they're being hipsters but because, based on the looks of it, I don't know how much more capacity they have at present. Their doubler (the pot still used for second distillation) is so small that, when I visited the distillery, I almost wanted to pick it up and walk off with it. As such, there's not a lot of Peerless to go around. But if you don't see the bourbon in your local liquor emporium, fear not — it's said to be rolling out in 45 states come 2020.