Whisk(e)y Of The Week: The Balvenie's Nod To The Nerds

The Balvenie's Tun 1509 series is a single malt geek's dream dram. First off, it gives Malt Master David C. Stewart — a veteran of the brand since 1962 and still going strong as probably the most iconic figure in all of Scotch whisky — a chance to rummage around the tens of thousands of casks he's got currently aging. He takes some of the best of what he finds and creates annual one-off runs that exist primarily because he likes how they taste, not because they're particularly sexy to the vast majority of whisky buyers. I mean, Tun 1509? What the hell, non-geeks may be wondering, does that even mean?

Tun 1509 was originally Tun 1401. And Tun 1401 was a marrying tun, in which whiskies of different ages and barrel finishes are blended, or married, for a certain amount of time, in this case three months, before bottling. According to Stewart, that's how long it takes the separate components to become a harmonious whole. When the annual bottlings became a little too popular and greater capacity was needed, the larger 1509 became the go-to tun; this is its sixth annual go-round. 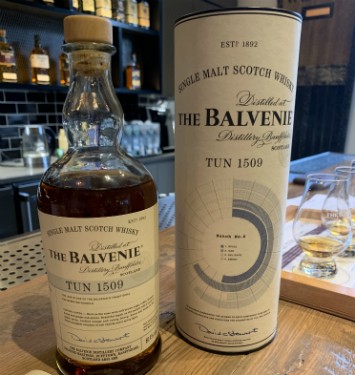 Another plus for enquiring minds is the packaging of The Balvenie Tun 1509 Batch 6 (50.4% ABV; no age statement, $400), which contains almost every nugget of information you could want about what's in the bottle. All 21 casks from which the blend comes are accounted for in great detail, from what kind of liquid they'd previously held (it's a mix of ex-bourbon American oak and refill sherry butts, some of which also held the Balvenie's own DoubleWood expression) to the flavor components of each one, rated on a five-point scale in four different categories. The only thing that will irk some whiskyphiles is the lack of age statements for any of the casks. Some distillers maintain age isn't important, and it's certainly not always as important as some folks think it is. But if we're going to get all the details, it'd be nice to have that one as well.

But any quibbles fade away at first sip. Because each batch of Tun 1509 is totally unique and guided by little more than David Stewart's whims and his taste buds, one year's Tun can taste very different from the last. So if you're lucky enough to have a bottle from years past, you'll still want to check out this latest one. Is Batch 6 the best of the lot? I honestly couldn't tell you (and I've never tried Batch 2 or 3 — if you've got some to spare, get at me), but I do think that this is the most distinctive of the ones I've tried. It's got that classic Balvenie base of sweet and supple honeyed vanilla, but it's overlaid with plenty of ginger and cinnamon spice, and the sweetness is leavened by lots of dry oak, especially on the long, warm finish. It's bottled at cask strength, coming in at just over 100 proof, but you wouldn't know from tasting it, so gently and smoothly does it slide down the gullet. It's downright delicious, regardless of how much you want to nerd out about the specifics. But hey, the box does make for great reading material while you're savoring a dram or two.