Whisk(e)y Of The Week: The Dalmore's Limited Edition Of... One Bottle?!

Whisky collectors love a rare whisky with a good story. And the rarer it is, and the better the story, the more bonkers they go. As a booze hoarder of some renown (at least among my friends who've seen my overflowing liquor shelves), I get it. Having a bottle that only a few other people in the entire world own is pretty intoxicating ,whether or not you actually drink the liquid inside. So it was only a matter of time before the idea of whisky exclusivity reached its logical conclusion, with an edition of a single bottle.

The doers of the deed are The Dalmore, specifically the brand's master distiller/blender Richard Paterson. His most exclusive creation finds him teaming up with chef Massimo Bottura, whose Osteria Francescana restaurant in Modena, Italy is the current title holder of World's Best Restaurant. The result, The Dalmore L'Anima Aged 49 Years (41.5% ABV), is the product of ten of the Dalmore's rarest casks, selected by Paterson and then blended in concert with Bottura. It's the chef's first foray into the world of spirits; the proceeds from the auction of the bottle (courtesy of Sotheby's) will benefit his non-profit Food For Soul organization, which fights against food waste in local communities throughout Europe as well as Rio de Janeiro. 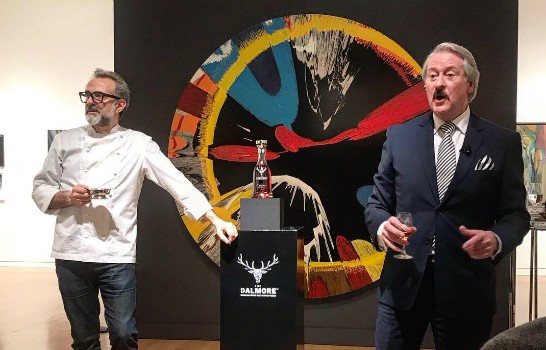 You don't hear a lot about barley sourcing or distillation techniques from Paterson — for him, the cask aging is the story. The final blend of L'Anima comes from casks laid down between 1966 and 1968 and aged in a combination of ex-bourbon barrels, Pedro Ximenez sherry casks from Gonzalez-Byass, and vintage 1961 and 1971 Graham's port pipes. Paterson and Bottura met up in Modena, where they created what Paterson calls the assemblage: "I said to Massimo, 'Look at this, look at that, can you see all these flavors — the balsamic, the marmalade, the spice... it's all there, but we've got to put that assemblage together.'"

The finished product is somewhat different from the rest of the Dalmore portfolio. Rather than the familiar velvety chocolate orange notes that predominate throughout the Dalmore range, here the orange is turned up and the chocolate is a bit toned down. It's drier and more citric than your typical Dalmore, with dry raisin notes coming into play as well. In short, it's one of a kind. Oh, and if you're wondering how I got to taste a whisky of which only one bottle exists... well, there's only one for sale. They made another for us writer folk to taste, and I wouldn't be surprised if Richard and Massimo have bottles squirreled away as well. 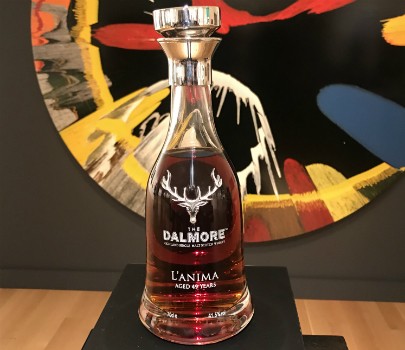 That said, your best bet to score a taste of L'Anima, assuming you're not buddy-buddy with either of the fellows who made it, is to bid on it. If you're interested in merely seeing the elegant crystal decanter, display bottles will be on view at Sotheby's in New York and Hong Kong starting on April 29, with the real thing going under the hammer on May 9th in London. There's no reserve price, so if the rest of the whisky collecting world somehow forgets about the auction and you wind up as the only bidder, you could score this unique dram mighty cheap. Somehow, though, I doubt that's going to happen. The bidding is expected to start at $85,000. Chef Bottura says, "I hope it makes millions." Hey, you never know.