Whisk(e)y Of The Week: What To Drink While Watching Scorsese's New Bob Dylan Film

So much of Bob Dylan's life and work is shrouded in myth and mystery, much of it his own making, that it's hard to know what he really thinks or feels about anything. Even his new "documentary," the Scorsese-produced Rolling Thunder Revue, is based in large part on fictional characters that are easy to miss if you're not looking closely for them. So when Bob announced to the world a few years ago that he was passionate about American whiskey and was launching his own brand, Heaven's Door, what were we Zim-o-philes to think? Was it a cash grab along the lines of his Victoria's Secret commercials from the late '90s? Or was it more like the large-scale iron sculptures which he's been making for years and about which he seems genuinely enthused (the sculptures are replicated on the Heaven's Door bottles)? True to form, Dylan's letting the whiskey do the talking. — the only real promotion he's done for it was a brilliant, typically Dylanesque spot on the Tonight Show in which he doesn't say a word. 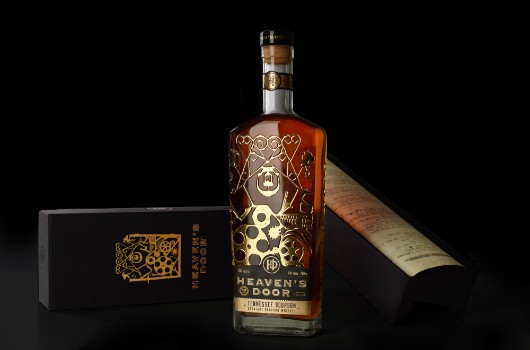 Heaven's Door 10 Year Old Tennessee Bourbon (50% ABV, $130) makes for a fine pairing with the documentary, or for the more Dylan-obsessed, the new 14 CD boxed set documenting the 1975 tour covered in the film. Like Dylan himself, it's an enigmatic sipper. Sometimes I'll get vanilla and brown sugar sweetness with hints of menthol, only to be greeted with dark caramel and oak notes on the next mouthful. As with its Tennessee counterparts George Dickel and Jack Daniel's, it's charcoal filtered, though unlike George and Jack, Bob doesn't call it a Tennessee whisky, opting instead for "Tennessee bourbon." Why? The answer, my friend, is... well, you know the rest.

As with the other whiskeys in the Heaven's Door line, this one won't make you forget Dylan the songwriter or performer, or even the iron sculptor. But it's an honorable side project, and if you've got the coin, it's a worthy addition to your liquor shelf. As for what it all means in the context of Dylanology... your guess is as good as mine. Or as Bob himself put it back in 1964, "It ain't no use a-talkin' to me/It's the same as talking to you."